Temstula, the action hero of the Ganga Ghats says she is not done yet! 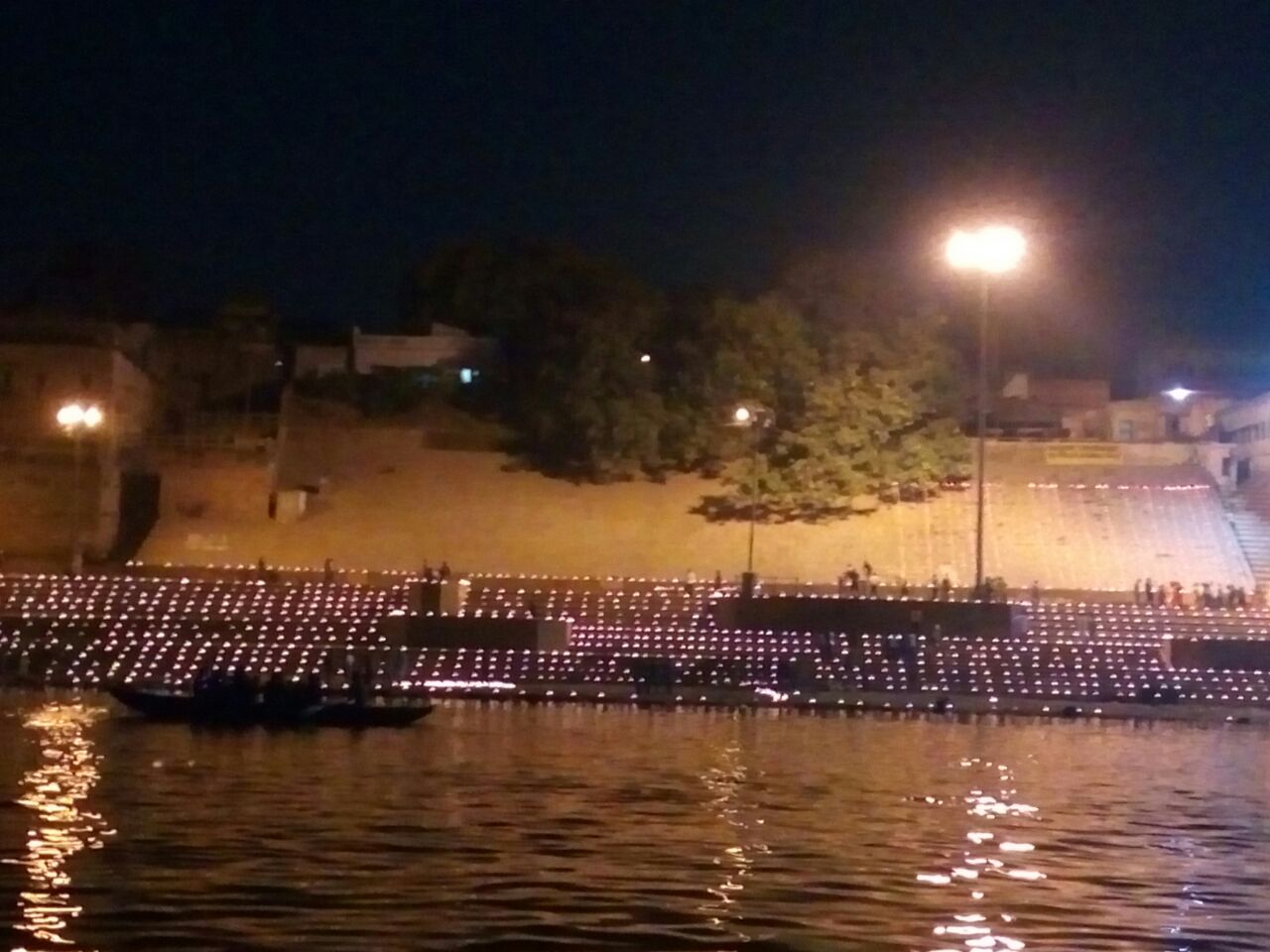 On the occasion of Ganga Dussehra, 2000 diyas (lamps) lit up the Babua Pandey Ghat making it a sight to behold. Some months ago, this sight would seem impossible to even imagine! So how did a ghat that reeked in stench of feces and garbage, suddenly bear a jaw-dropping sparkling clean and fresh look? IndiaFacts gives you the full story, firsthand. On 31 March 2015, #MissionPrabhughat had started creating ripples – enough for us at IndiaFacts to sit up, take notice and print this article. An enthusiastic brigade of young volunteers led by highly motivated Temsutula Imsong were changing the face of Prabhu Ghat with meagre resources and an immense amount of willpower. As she posted pictures of her team’s amazing work, the results were there for all to see and appreciate.

But for Temsutula Imsong it was just the beginning; as she had told us: ‘#MissionPrabhughat is not over yet, we are trying to get a viable solution to the problem of defecation, and also getting Prabhu Ghat on the tourist map of Varanasi.’ Two months later we again caught up with Temsutula Imsong, the action hero of Ganga Ghats, who never tires and is all about action, not mere words. Read on to find out how #MissionPrabhughat is faring as Temsutula tells us more.

Recalling the day when her team’s work was the talk of the town, Temsutula says, ‘A day after IndiaFacts posted the #MissionPrabhughat story, it became a landmark of sorts as almost the next day Prime Minister Narendra Modiji appreciated #MissionPrabhughat saying: ‘This effort by Temsutula Imsong and the entire team to clean the Ghats in Varanasi is phenomenal! I salute them.’

This exposed our team to unprecedented scrutiny and media coverage. However, for us, this was also the time when emphasis was being paid on sustaining the cleanliness at Prabhu Ghat and also diversifying it to undertake new initiatives.’

While most people were busy contemplating on how this team would sustain the initiative, Temsutula was already on the job and thinking of newer initiatives. She says, ‘Apart from the regular cleaning of Prabhu Ghat and Chet Singh Ghat, our team started the Kashi Debates to derive positive inputs on various issues from anyone who wanted to participate. During one of these discussions/debates it was pointed out that Babua Pandey Ghat (commonly known as Dhobi Ghat) was another Ghat, which was in dire need of some attention.

Apart from this, the team #MissionPrabhughat also made visits to Kajra Patti village which Sakaar Sewa Samiti had adopted. The intention was to make this village a supplier of cloth bags to be used for the ‘plastic free Ghats’ campaign. The result was that this campaign resulted in us cleaning this village and transforming it too.’

When the team visited the Babua Pandey Ghat on 11 April, they were welcomed by the stench that was emanating from about 61 meters of silt, filth, garbage and excreta, never cleaned for ages. Temsutula recounts, ‘We had cleaned Prabhu Ghat successfully, but Babua Ghat was a daunting task. The initial the results too very discouraging and we felt let down as there was complete absence of any local participation. And in this ghat, not just the garbage, there was a huge amount of silt that needed cleaning. It took us many days to remove the garbage that had been dumped for ages there. It was exhausting and discouraging because unless and until we cleared the silt, all our efforts meant little. Clearing silt required resources, which we didn’t have in plenty.’

Though resources and manpower were not in plenty, the team discussed this with their friends who friends who support Sakaar Sewa Samiti. They decided that come what may, the silt had to be removed. ‘We started this on April 13,’ says Temsutula, adding, ‘Big boulders were present. Garbage was buried in the silt. Removing the boulders, separating the garbage and then disposing it was a huge task. We were aiming to get Gangaji to the steps as that would even aid us in cleaning, but it was an oversight. We all overlooked the fact that the Gangaji was receding very fast and it was technically impossible to get Gangaji till the steps. Every day was proving to be a challenge because of receding water and the rising temperature.

With irregular presence or absence of many team members it also resulted in prolonging the task. The distance and accessibility of this Ghat was one of the factors which made things difficult. For me it involved walking almost seven kilometres every day as I walked from Assi Ghat to Babua Pandey Ghat!’

Walking 7 Km to clean the Ghats is no mean feat. However, for Temsutula that was not all. Not only did she and many other volunteers walk that stretch every day in a mission to clean the Ghat, she also realized that there was so much more to be done. ‘When I took this walk, it led me to Kedar Ghat where I came across Gauri Kund. And Gauri Kund was another Babua Pandey…full of silt and stinking. We decided to get that cleaned too and that was done in two days. The results were very encouraging.’

Back to Babua Ghat, the cleaning of silt, filth and garbage took almost a total of 45 days. But the long hours in the heat, spent at this Ghat led to promising results. A happy Temsutula, shares, ‘A Ghat where till date you could not sit, forget swim and spend time had finally been transformed. We had transformed this Dhobi Ghat into a place where people can swim, spend some quiet time and also play! Yes, there is a volleyball court where youngsters can play. We also put up one urinal to deal with the problem of locals and tourists peeing just anywhere. On 28 May we decorated Babua Pandey Ghat with almost 2000 diyas and the transformed ghat was a sight to behold. It looked like a dream. That day was the occasion of Ganga Dussehra and Babua Pandey Ghat was the only Ghat which was decorated with 2000 diyas!  I will never forget the sight…it was truly beautiful! It just took my breath away!’

A motivated team kept them going

From the time #MissionPrabhughat started, Temsutula had decided to share everything on social media. She says, ‘The responses were overwhelming and provided us with much needed encouragement. Support from Shishir bajbai @sbajpai2806, Shailja @shailjah, Ramanath Manchala @maddy2112  who visited Kashi to join us, is something we can never forget.

Apart from this, the backing of well-meaning friends took care of the resources that we needed. Of course no story will be complete without naming the kids of team #MissionPrabhughat – Harshit Agrawal   @harshit_4215, Pavan Raj @p_pavanraj, Rohan Tripathi @RohanTripathi10, Shubham Tiwari @tiwarishubham03, Vineet verma @vineet_verma1, who toiled day and night to transform this ghat into a dream. Their focus, hard work and perseverance is an example for every youngster.

Other members of the team –Anurag Singh @anuraaag007, Ashutosh Dixit @ashutoshdixit84, Ayushi Shukla @ayushi_shukla06, Darshika Shah@Darshikashi, Shreyansh Chaurasia @Shreyanshvns, Shreyas Singh @shreyash01, Shubham Pandey @ishubhamm, Vishal Singh @Vishaallllsingh, Kartikey Pandey, Michael, Pakalu Bhaiya, Mahinder, Bablu, Tiwari Ji, Priya the young kid, and not forgetting Bhattacharya Uncle and Aunty who despite being very old insisted on bringing refreshment for the team. I may have missed a few names, but all the people in their own way pitched in towards this vision of transforming this Ghat and putting it on the ‘places to visit in Varanasi’ list.’

Like in the first phase of #MissionPrabhughat, in the second phase too, it was the social media that helped them spread the word and reach out to people. This remained the prime source of information about #MissionPrabhughat. ‘The tweets on the tag from tweeps was a constant source of positivity and encouragement for us,’ says Temsutula, adding, ‘Arrangements have been made to get the Ghats – Prabhu Ghat, Chet Singh Ghat, Babua Pandey Ghats washed and Gauri Kund cleaned and refilled every Saturday in the week, so that it’s sparkling clean for the weekend visitors. Apart from this, daily games of volleyball, Kashi debates, swimming and self-defence lessons are being conducted to encourage people to visit the Ghats and contribute towards cleanliness. As we said last time, we are not done yet, there is more to come – to surprise you and to set standards of efficiency and innovation.’