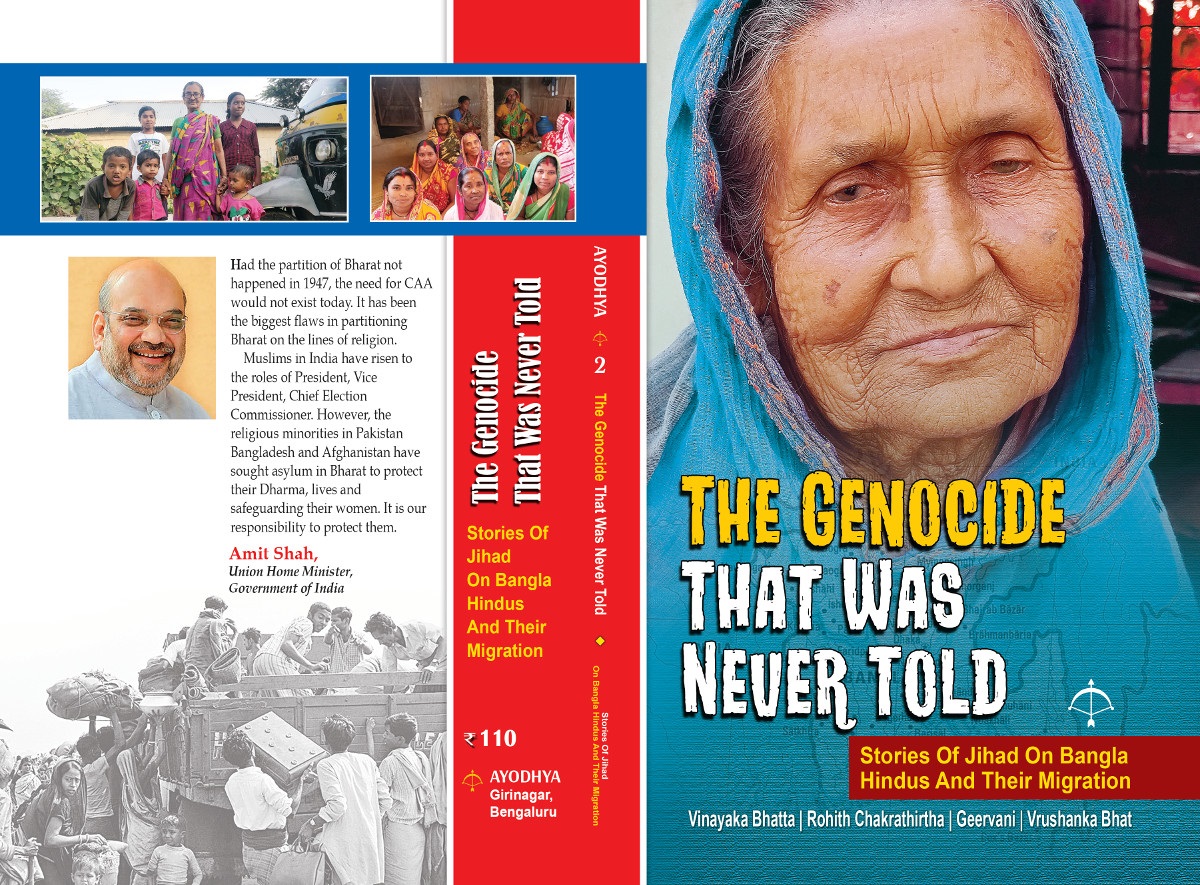 Editor’s Note: ‘The Genocide That Was Never Told‘ by Vinayaka Bhatta, Rohith Chakrathirtha, and Vrushanka Bhat documents stories of Jihad on Bangla Hindus and their migration into India. The book is originally written in Kannada titled ‘Utta Batteyalli Horatu Bandavaru‘ and has been translated into English by Praveen Patavardhan and Prashanth Vaidyaraj. Here is the Foreword to the book written by NS Sethuraman.

During the time of protests against the Citizenship Amendment Bill, a Muslim leader from Uttar Pradesh in his speech opined thus, “Muslims worldwide are my brethren.” True that! But why alone Muslims? All human beings are my brethren. I have believed in the Hindu Vani of Vasudhaiva Kutumbakam. There was no need of the boundaries. The soldiers at the borders were not needed. There would be no question of citizenship. I never needed one too.

During the time of freedom struggle, the intellectual and well-educated leaders felt the country had to be divided on the lines of religion. Majority of these leaders were lawyers. The emotions were valued less when compared to the argument of logic. Spreading the map on the table and marking borders on the lines of religion not taking into confidence of the mindsets of people following the other religion and dharma was lame.

Human beings are not machines. A man is an embodiment of memories and emotions. This is my place; I have walked around here. This is the school where I studied. I learnt swimming in these rivers and lakes. My parents; My grandparents; My pious place of worship; Human beings are manifestation of generations of existence.

Life is not a mere bodily phenomenon. It has a strong emotional connect. Arguing sans wisdom on land being a mere land and why should one have an emotional connect, is to say the concupiscence could be met with other’s wives too. Emotionally my place and land is my home – my everything. It isn’t easy to uproot oneself and set off to a new land.

Those who lost lands migrated and those who had them rooted themselves. The land of East and West Pakistan was chalked out exclusively for Muslim fraternity. The Hindus who were contented continued to stay there. There was some misery in the homes of some Muslims in East and West Pakistan. The Hindu who resided next door was leading, if not lavish a decent lifestyle. His godowns had enough grains. The Muslim felt his wife and children starved for milk, but the Hindus had enough to drain it on the stones (performing abhisheka). This being a land of Muslims, the Hindu who continued his stay was enjoying, depriving the Muslims of his right. This was the fence of mind at large. Those with such illicit mindsets grouped themselves and started to attack the minority Hindus. The Governments which should have stopped it, fueled the minds with the drugs (!) of religion. Thus, the tyranny and cruelty were quite but natural. This book brings about an account of those who lost their everything from East Pakistan (the present-day Bangladesh) post 1970. The book is a documentation of stories of ones who migrated to Sindhanur refugee camp in Karnataka from Bangladesh.

Drifting humans is easy to achieve, First destroy the crop he grows. He will shrink. Loot him of his wealth and grains. He will melt further. Butcher the livestock he rears. He will lose the most. Destroy and desecrate the places of worship, he becomes lonely. His identity crashes. Despoil his women – rape his wife and daughters. Once they cease to exist, he will finally become a homeless nomad.

Not all are indecent. But there plethora of people who had lost the decency existed. The political drama coupled with religious fanaticism results in the birth of a demon. Such a demon would not have a Dharma (way of living). If he is “educated” with intellect siphoned out, works as a machine which can destroy the culture. This machine and mission which destroyed the life of Hindus in East Pakistan and made them suffer for 50 years is well documented in this account.

There are some truths, this book spells out openly. The 1971 war, the fight which existed between East and West Pakistan over the choice of use of language – Urdu or Bengali, the duel between the Hindu Muslim duo, the wrangling for acquiring illicitly other’s lands, snatching of property and wealth – all these resulted in upheaval and uprooting of the families. Those families who have now resided in Sindhanur and other such refugee camps are all Hindus. The present Citizenship Amendment Act is a way to provide them an identity, issue citizenship, provide dignity and to not snatch anything from anyone else.

The Universities of our times are known to “educate” us and also siphon out intellect from our minds. The soldiers will protect the borders. The law will be taken care by the police. Governments will strive to alleviate poverty. If all is well, life is serene. But what if something goes erratic? The agricultural produce which burns in front of the eyes of the farmer, grown up daughter goes missing all of a sudden, or a young one is trying to find its milk from the breasts of the dead mother, or someone who is looking at the horizon for hope sees in the dawn the blood dripping from the hung legs, hands, breasts of loved ones he would be left with only a way out – to escape and save himself instead of living in the verge of being killed. The need of the hour is to have the Borders. Citizenship Amendment is a must.

Vasudhaiva Kutumbakam is acceptable. All human beings of all castes, religions, communities are part of my extended family. We adhere to it. That is why I am “secular” or even “dharmanirapeksha”. But!!! My house, country, language, dharma, my beliefs towards my Gods, my wife and daughters belong only to me. He who disrespects, disregards can never be part of my extended family. He is no brother to me. The foundation of relations is not in actions. It is in the reactions. This book gives the flavor of the same.

Infographic: State of Hindus in Bangladesh