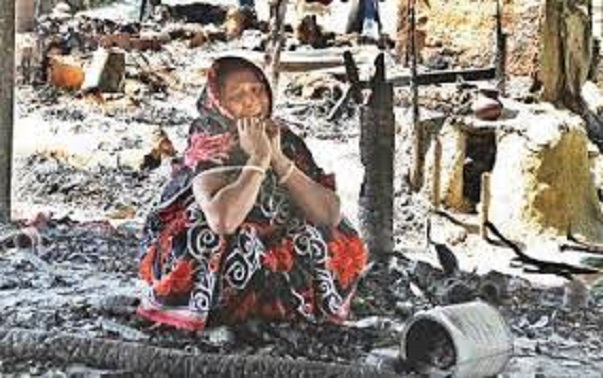 Twenty eight Hindu families living in the Dasherkanda para area of Ranggabali upazila under Potuakhali District of Bangladesh are now living as slaves of Muslim militants and kept captive in their houses from the first week of February 2015. Muslim militants who are politically powerful in the said area restricted the entry of journalists, as a result of which the citizens of Bangladesh are totally ignorant about the situation.

Muslim militants of the Dasherkand para who are torturing the Hindu families and using them as slaves are politically powerful. Some of them are Awami League supporters while some are BNP- Jamat supporters but they are working jointly to convert the Hindus to Islam. Some journalists did try to reach the village for reporting but was barricaded by a group of Mullas forcing them to back out. Ultimately a group of concerned journalists issued a press release where they condemned the torture on the innocent Hindus by the Muslim militants along with demanding the rescue of the said Hindu families.

At present, the Bangladesh Nationalist Party and their alliance Jamaat-E-Islami are carrying out random attacks on the general public nationwide in the name of anti-government demonstration. Police and the Para-Military forces along with RAB are occupied in tackling this violent phenomenon making them overlook the Hindu persecution in Dasherkand Para area. A local source from the said area has informed that the Muslim militants forcing the Hindus to eat beef. Also the life and future of about fifteen young girls are in grave danger.

These fanatics who the Awami League have been demanding 3,00,000 to 5,00,000 (Bangladesh Taka) from each family  as safety tax. Local police are not taking any action claiming they are yet to receive any complain from the victims.

The Hindu families in the Dasherkanda Para are now forced to accept Islam and eat beef to maintain a peaceful life. The cruel situation prevailing in the village of Dasherkanda Para is a clear violation of Human Rights. But, no agency has come forward to address the matter so far. Even the victims are quiet unable to lodge a complaint to the local Police Station.