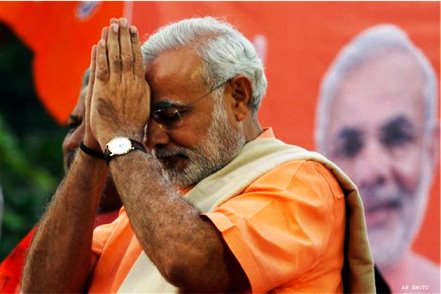 Note: IndiaFacts is happy to publish the second reader-contributed fact check piece that counters instances of distortions about facts relating to Hinduism, India, and public discourse. We are delighted to inform that Mr. Balaji Srinivasan has sent us the following Fact Check piece.

Assertion: An article by Smita Gupta in The Hindu on 11th November 2013 makes the following claims about Narendra Modi:

If we examine these assertions one by one, it is clear that Smita Gupta’s article is full of misleading opinions masquerading as analysis.

The first, that the Indian media is backing Narendra Modi is as far from the truth as it can get. Indeed, the reverse is true. As recent history is witness, the Indian media ran an almost nonstop campaign of calumny against Modi for nearly a decade. There are countless instances of media distortion of facts mainly about the 2002 Gujarat riots, their investigations, and Modi’s personality, among others. Perhaps the greatest of distortion is seen in the case of the media uncritically printing Teesta Setalvad’s false accusations against the Gujarat Chief Minister. As we see, this agenda-driven media campaign–which is now subtle–continues till date. IndiaFacts itself in a recent Fact Meter exposed how Tunku Varadarajan fudged the figures of the riot victims.

Therefore to claim that the media backs Narendra Modi is mostly false.

The second assertion that Modi’s “core Hindutva voters have noted that he now refers to Mr. Gandhi as shehzada , the Urdu substitute for yuvraj , to reinforce the Congress’s pro-Muslim inclinations” is based on a biased and negative reading of Hindutva. Equally, the pejorative usage of “Hindutva voters” does disservice to journalistic ethics by twisting terminology and imputing negative connotations to a certain section of Indian voters. Further, it is Smita Gupta’s own conclusion that the usage of the word “shehzada” is a deliberate ploy by Narendra Modi to play to what she calls his “core Hindutva voters,” with no facts to back this conclusion. If this were indeed true, Smita Gupta’s conclusion should equally apply to the Congress party’s incumbent Prime Minister Manmohan Singh who has on occasion quoted Urdu couplets.

Smita Gupta’s third assertion that “Mr. Modi’s meetings with Hindu victims of the recent explosions in Patna was his way of telling his core constituency that he hasn’t forgotten his Rashtriya Swayamsevak Sangh roots” is yet another example of mischaracterizing him by giving twisted accounts of events to suit her narrative. The fact is that it happened that all the victims of 27 October Patna blasts were Hindus. The obvious question that follows is: does Smita Gupta want even Muslims to have died in the blasts so that she could test Narendra Modi’s attitude towards the Muslim community? Indeed, this statement reveals a lot about Smita Gupta’s attitudes than Modi’s. That said, there is nothing in Narendra Modi’s words or actions that indicate hostility towards Muslims. Indeed, it was Modi who in his 2012 Sadbhavana Mission proactively reached out to Muslims and spoke of inclusive growth. And this is not to mention that Muslims in Gujarat are better off than their co-religionists elsewhere in India.

It is clear from the aforementioned facts that Smita Gupta’s article is highly biased against Narendra Modi because it relies on mischievous interpretations of his record. It also displays blatant communalism by judging Hindutva adherents as guilty by definition, without stating any evidence. In fact, Smita Gupta’s article is by itself proof that the Indian media is actually hostile towards Modi rather than being in his favour.

The Hindu piece seems to be written with a deliberate intent to mischaracterize Narendra Modi.