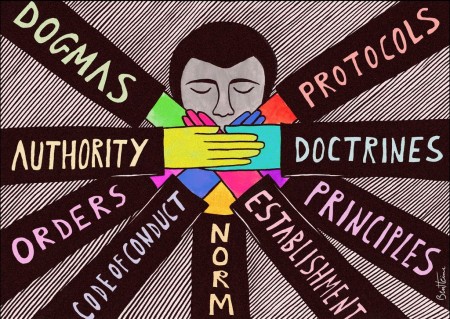 Information & Broadcasting Minister Prakash Javadekar has rightly highlighted the “Emergency mindset” of the Congress-led United Progressive Alliance (UPA) government. The mindset vilifies anything that is in dissonance with the Congress-type views, dubbing it as ‘communal’, ‘bigoted’, etc.

This was the reason that the previous regime disallowed the setting up of a news channel in a cavalier manner. “After I became the I&B Minister, I was reviewing pending files in my ministry. I noticed that while many TV channels had got permissions to start operations, one proposal had been rejected… I checked the Home Ministry’s report to find out the cause… I was shocked to see that the channel’s proposal was rejected because one of the directors’ father was an RSS member,” Javadekar recently told reporters.

The clearance pertained to a proposed Malayalam news-cum-entertainment television channel, which was stuck for about a couple of years. It was, however, one of the very few instances of Congress-style censorship that have come to light; most of them are never known. Equally bad, if not worse, is the magnitude of self-censorship that all media organizations have to exercise to steer clear of wrath when the grand old party (GOP) is in office.

And it is not just a question of upsetting the government of the day. Since academics, writers, editors, and other opinion makers work assiduously to keep public discourse in conformity with the political requirements of the Congress, anybody daring to challenge the dogmas of Nehruvian socialism gets marked as a dangerous deviant. So, the votary of economic reforms is maligned as a stooge of big business or, worse, an American agent (CIA agent is even more sensational). The predicament of the Hindutva ideologue is worse because of obvious political reasons. As far as RSS or BJP is concerned, even a hint of association can land one in trouble. Hence the tribulations of the Malayalam channel.

Since news channels and newspapers influence public opinion, it was of prime interest for the GOP to keep its direct and indirect control over the mainstream media (MSM). To a large extent, the party did succeed, as evident from the fact that while many scams during UPA rule surfaced, the members of the Divine Family remained unscathed. In spite of the unearthing of innumerable scandals, the MSM was careful enough to ensure that the Gandhis remained beyond taint. A. Raja, Suresh Kalmadi, Pawan Kumar Bansal, Ashwani Kumar, and many others got tainted and suffered the consequences, but not Sonia Gandhi and Rahul Gandhi.

It was an anomalous situation: everybody knew that Sonia ran the government, that her and her son’s wish was command for the UPA government, and yet nobody dared to put two and two together. It was left for Swamy to drag them to the court of law in a criminal case. Such was the terror of She-who-must-be-obeyed.

During the Emergency, L.K. Advani famously said, the Indian press was asked to bend but it started crawling. There was no Emergency when the UPA was in power, but the atmosphere was stifling. It’s not that every journalist became a Congress lackey or was subdued, but a large number of media barons and editors were scared. Many of them chose to blindly toe the Congress line on practically every issue. Several careers and fortunes have been slamming the Sangh Parivar and screaming ‘Gujarat genocide.’ Unsurprisingly, the views of some of the media eminences are indistinguishable from those of Congress spokespersons.

In the dark period when the UPA was in office, whereas the MSM was more or less kept on a tight leash, the social media remained untamed—something that galled Congress leaders to no end. The former law minister, Kapil ‘Zero Loss’ Sibal, even came up with a draconian piece of legislation, Section 66A, which was introduced in the 2009 amendments to the Information Technology Act. The principal motivation was to bully the citizens into worshiping the Divine Family: nobody should be allowed to mention Soniaji, Rahulji, and other GOP grandees in a manner less than reverential. Many innocent people have been victimized just because their views offended some people.

Thankfully, the Age of Sonia is over. With it, the authoritarian measures that it thrust upon the nation should also end. The Narendra Modi government would cover itself in glory by making a beginning by abrogating Section 66A. This will be a big blow to the Congress leaders and their Emergency mindset.