Trinamool goons will gun you down for voting BJP 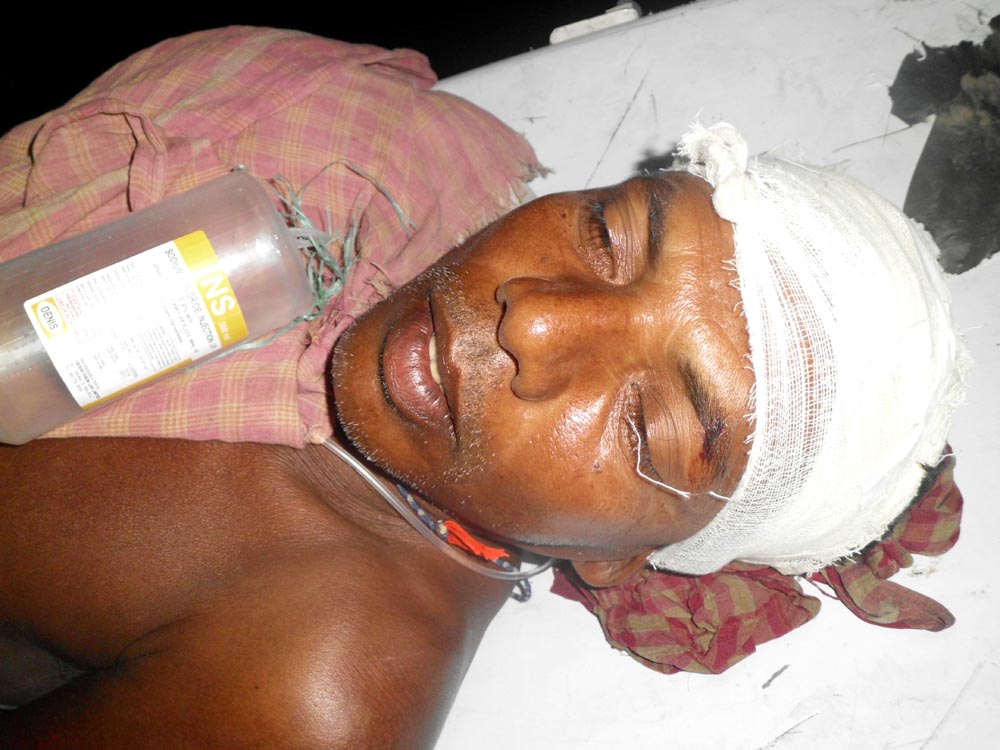 This ground report was sent by an IndiaFacts reader and supporter who was witness to the incident.

As the nation celebrated the historic swearing-in ceremony of India’s 15th Prime Minister Narendra Modi on 26 May 2014, the villagers of  Halder Para & Gayan Para falling in the Sandeshkhali police limits in North 24 Parganas district, too decided to join the occasion in their own way. This also owed to the fact that the voters hailing from there had given significant lead to the BJP candidate in two booths (153 & 154). However, little did they suspect the outcome that would follow.

On 27 May at about 9.30 A.M, about 10-12 local Trinamool Congress (TMC) goons, allegedly under the instructions of  TMC leader Shahjahan Shaikh (who is also the Upa-Pradhan of Sarberia Panchayat), reached the house of Dhananjay Baul, the local Hindu Samhati activist at Gayan Para in search of him.

Shahjahan Shaikh and the local TMC were already harbouring resentment against Dhananjay Baul because he was responsible for foiling their attempt to suppress the report of the rape of a Hindu girl at Jhupkhali. As Dhananjay was not present, they found his brother Mrityunjay Baul and beat him mercilessly. Tapan Sardar of Halder Para also underwent the same fate.

When they learned of this incident, villagers of the aforementioned villages became furious and blocked the main road connecting Dhamakhali to Kolkata at the Rampur Haldergheri crossing. They also allegedly detained Haji Biswas, Bappaditya Mandal and Bimal Halder who had attacked Mritunjay Baul and Tapan Sardar.

About 5-6 police personnel from the Sandeshkhali police station reached the spot to remove the blockade. After assuring the villagers of proper action against the offenders, they convinced them to withdraw the blockade and release the detainees. At this juncture, Haji Biswas made a call to Shahjahan Sheikh. Within 15 minutes 3 vans full of goons armed with guns and bombs reached the place. Immediately they opened fire and hurled bombs on the villagers at random. One police officer, Samir Ghosh, was hit by a bullet in his eye and 26 villagers sustained gunshot injuries.

All injured persons including women were taken to Khulna Block Hospital. Thirteen persons have been released after treatment and 13 others including Prabhas Gayen, Mantu Sardar, Gostho Gayen, Bonkumar Sardar, Manik Sardar, Gautam Gayen, Dholok Gayen, Mrityunjay Baul, Tapan Sardar, Satya Sardar, Ajay Gayen and others, who sustained severe bullet injuries have been admitted to the SSKM Hospital in Kolkata. Their injuries are critical because the doctors of the Block hospital could not extract the bullets from their bodies.

Some photos shot on the spot tell the stark reality of the violence and mayhem that the ruling TMC has been unleashing on a regular basis.

The attackers include Siddik Mollah, Akhtar Mir and Ziyarul Mollah among others. All of these are chargesheeted, notorious criminals of Shahjahan Sheikh’s gang.

The RAF has been deployed in the area but no arrest has been made so far.

This is only the latest of many post-poll incidents of severe aggression against Hindus in the Sandeshkhali police limits. Hindu Samhati activists fear that more such incidents will lead to another Hindu exodus from the area, similar to how it happened in the case of the mass Hindu exodus from the Mograhat Block of South 24 Parganas district during Left Front rule. In this case, the dreaded Muslim don Salim unleashed the said reign of terror against Hindus. He has since switched sides to the TMC and is one of their prized minority assets.