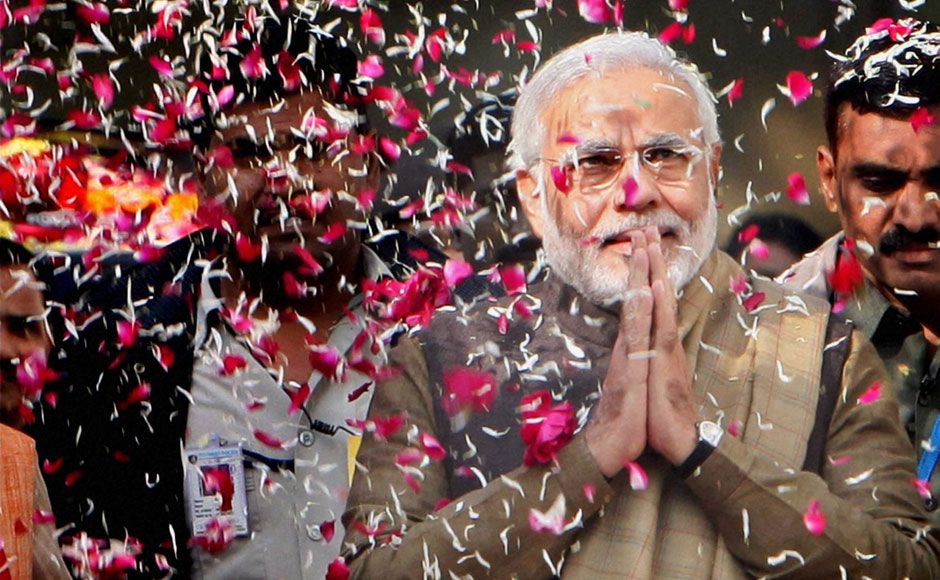 In response to a group of US-based academics urging Silicon Valley entrepreneurs  to boycott Prime Minister Narendra Modi’s upcoming visit to San Francisco, a group of eminent people hailing from various spheres of life have issued a statement condemning such reactionary behavior.

The cooperation of Silicon Valley for the Government of India’s new information technology program is crucial for India’s overall growth, for bringing technology to the masses, and reducing corruption and allied bureaucratic ills.

Sri Narendra Modi is the democratically elected Prime Minister of India, and under his leadership, his party has been able to form Government in four states across India including Jammu and Kashmir. This establishes without an iota of doubt that Indians have firmly reposed faith in Modi’s governance.

Therefore any attempt to boycott the Prime Minister is tantamount to advocating a boycott and marginalization of India as a country, and such cannot be condoned in any way.

Narendra Modi has initiated various other programs like Jan Dhan Yojana, and Make in India which have already shown remarkable positive impact. These have in turn set a stellar precedent and high expectations from the benefits of the Digital India initiative.

Contrary to what a group of a few reactionary academics may believe, Digital India has the potential to transform the way things work in this country, bringing in richer benefits for all sections of society.

Allegations of Narendra Modi’s involvement in the 2002 Gujarat riots are baseless and are in reality, malicious attempts at trying to derail Prime Minister Modi as an individual, a Prime Minister, and India as country. These allegations have already been proven false in the highest Court of Law in India.

Therefore, such a blatant denial and contempt of a court verdict is not only unfortunate, but also betrays a complete lack of objectivity and acceptance of truth, and further calls into question the true motivation and agenda behind their desperate attempt to stop Narendra Modi.

Ironical is the fact that these individuals who have probably taken the shorter and unethical cut to fame through spreading falsehood and maligning Modi, are doing so in the name of the very masses who have emphatically endorsed Narendra Modi as the leader of the Indian nation.

The following is the counter-statement from a group of eminent intellectuals denouncing the political gimmickry of the aforementioned reactionary academics in the US who have urged a boycott of Narendra Modi’s visit to Silicon Valley.

To sign the counter-statement, click: URGE SOME ACADEMICS TO LIFT THEIR VEIL OF IGNORANCE THAT WAGES ECONOMIC WAR AGAINST INDIA

Digitization to Transform the Indian Economy and Society

A letter signed by a group of US-based academics, implacably opposed to Prime Minister Narendra Modi of India, has advocated a boycott of India by Silicon Valley. The attempt to instigate a boycott by Silicon Valley, one of the leading sectors of the US and world economy, against cooperation with a vital flagship information technology programme of the Government of India effectively constitutes a call for economic war against India itself. Shri NarendraModi is visiting USA as the democratically elected Prime Minister of 1.25 billion Indians.

The victory he has secured at the hustings has been the grandest triumph in three long decades. Not only that, under his leadership his Party and alliance have formed Governments in four provinces across India including the state of Jammu and Kashmir. This clearly establishes the fact that people of India, transcending barriers of caste, class, creed and community have reposed their faith in the Prime Minister.

The Digital India initiative, which the enlightened signatories decry, is going to transform government and governance in India. It will take technology to the remotest corners of India and eliminate corruption. It will profoundly change the lives of ordinary citizens who have to run from pillar to post in their dealings with official India and ensure speed, accuracy and disbursement of welfare to the poorest. Prime Minister Modi intends India’s embryonic digitization endeavor to become a vehicle for the transformation of Indian societyby deepening and democratizing it.

The process of digitization of the government-citizen interface is already in place in most advanced countries. Yet, academics based there allege civil liberties in India will be endangered if its own government adopts the rational and efficient measure of digitizing to improve governance that is standard elsewhere. Moreover, India is home to several digital innovators and a vibrant start-up ecosystem that stands to gain tremendously from the Digital India initiative. Silicon Valley, which is where the transition to a digital world began, is, thus, a natural place for the Prime Minister to visit and explore cooperation and growth opportunities in IT.

Shri NarendraModi has already unveiled schemes that were previously unheard of in nature and extent in the sphere of governance. For the first time the Government of India launched a financial inclusion scheme, Jan Dhan Yojana. Continuing this focus on the poor and the marginalized the Government has initiated a social security programme as well. These schemes have already touched millions of Indians. The wheels of economic reforms have begun moving at an unprecedented pace, with global agencies and organizations taking note of India’s strides. Shri Narendra Modi’s clarion call to ‘Make in India’ has drawn the world to invest in India and create employment for the people.

The faculty statement concerning Prime Minister Modi’s alleged culpability for the tragic events of 2002 is even more of a disgrace. It is a belabored and questionable effort to throw mud at PM Modi as a person; in the desperate hope some of it would stick. The canard of his alleged responsibility for the communal rioting in Gujarat in 2002 has been comprehensively debunked by a high powered Special Investigation Team (SIT) appointed and intensively monitored by the Supreme Court of India at a period when NarendraModi was not even the Prime Minister. By ignoring the fact that India’s Apex Court has exonerated Mr. Modi of all charges over 2002 amounts to defamation.

It also reflects their scant regard for India’s judicial process and her time tested constitutional institutions. Other slanders in the petition against India’s incumbent executive authority are unworthy of comment. The cavalier disregard for facts and paucity of measured judgment also demonstrate that signatories to the malicious counsel against India have very little stake in it. It seems as if they are determined to pursue a vengeful agenda against a democratically elected Prime Minister of the country even if it seriously harms the interests of the people of India.

As scholars and public intellectuals from around the world, we submit that we have far more faith in the wisdom of the ordinary people of India than in the motivated slander concocted by a tiny group of first world academicians.
We urge the signatories of the letter to lift the veil of ignorance and grasp the bigger picture. They should stop seeking fame by thriving on misplaced victimhood and false grievances. It is ironic that those who claim to be most exercised about “Human Rights” and “Civil Liberties” have arrogated to themselves the power to judge and mock the democratic choice of those very same masses they purport to speak on behalf.

Addition of Yoga to Directive Principles of State Policy: An Open Letter to PM Modi

How Karnataka government is spending crores of rupees on Churches: A Report