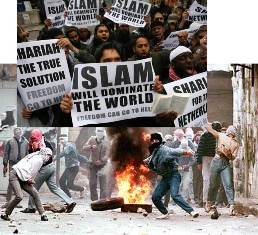 An oft-repeated bourgeois affectation earnestly avows that violence does not pay. This supposed truism, comforting in the ambience of drawing room chit-chat, is belied by experience. A vivid example is illustrated by the impact of Islamic terrorism on the UK. Untold sums are being spent on security, from the physical presence of personnel everywhere to myriad forms of surveillance. There is also a calculated attempt by the authorities to launch and elevate Muslims in the public arena, especially as journalists and television presenters. Numbers of imperceptibly talented individuals, proudly sporting their Muslim identity, are rapidly filling the public space. All, in the forlorn hope that it will convey a message of societal recognition and persuade angry young Muslim men to desist from planting bombs that kill the innocent and cause panic. Quite clearly, for the lucky few, terrorist bombs have become catalysts for career success. For them, violence has indeed paid.

Unbeknown to ill-educated policy makers, misinformed by ignorant journalists, their principal source of information for policy-making, this purposeful assimilative policy isn’t working at all. It is noteworthy that ideologically-driven expert policy advisers to politicians are also seized by an insane ‘kiss and make it better’ liberal impulse that has only compounded the ignorance of politicians. The ostensible aim is to divert angry, young Muslim men from the urge to plant bombs that kill and maim the innocent. Unfortunately, the bomb planter is fully aware of what they regard as the duplicity and chicanery of the political class and their underlings and rejects the feeble attempts to assuage their anger. In any case, amply remunerated, high profile jobs in the media are only available to the few and the hope that it will gratify the many, by supposedly encouraging feelings of displaced gratification, is plainly asinine.

On the contrary, the angry young men, praying five times daily and silently or not-so-silently spouting obscenities at women without appropriate head covering, are derisive at the cynicism of such policies. Uncovered delinquent Muslim media women, virtually all of them attached to white Christian partners, for whom death is prescribed by the Shariah, enrages them even further. The would-be Jihadis perceive in it a diabolical conspiracy to encourage Muslim women to abandon community and religion, by associating it with success. In fact, unknown to dim-witted politicians, a critical factor fuelling the rage of Muslim men is this very abandonment of community and religion by many British Muslim women. As a result, some Jihadis travel homeward to find an obedient spouse, British-born Pakistani men even venturing as far as remote Yemeni villages, in search of female religious fidelity they deem lacking in their own Jihadi homeland! Revealingly, Mohammed Bouyeri, the murderer of Dutch filmmaker Theo van Gogh, indicated that his simmering anger, because of Gogh’s film Submission, critical of Islam, became unbearable after his own sister chose a white, Christian Dutch partner. That is when he decided to kill the filmmaker.

In association with this lame policy, British public discourse and television broadcasts regularly feature solemn hand-wringing about the implied woes of a violent world. But they only dare a suggestive hint that Muslims should avoid participating in it! Assorted Muslim preachers, reformed Jihadis and religious leaders of Semitic persuasions, pontificate about the need for world peace, love, etc. What is studiously avoided is specific elaboration of political motives that precipitate violence by Muslims or the precise nature of their textual justification in the Koran, Hadith and Sunna. The underlying grandmotherly theme is that everybody has misunderstood everybody else and the need for the community and its sage elders to persuade youngsters with murder in the hearts, of the error of their ways. Hindus are rarely, if ever, invited to such gatherings because it would likely constitute provocation for the target Muslim audience these projects are designed to mollify. Excluded from the proceedings, Hindus, with a paucity of brain function and truncated wisdom, are sorrowful at their omission from such putative inter-faith parody, despite being the bearers of the rich tradition of Gandhian self-harm!

A trifling reflection on these proceedings makes clear that pure cynicism underlies such endeavours—from promoting cute young things, nominally of the Muslim faith, with giveaway names like Michelle in the media and inter-faith dialogue. Hindus are excluded from these discourses because these orchestrated interactions constitute a form of public negotiation, on air, of the mutual interests of Jihadis and the British establishment. The messages being pieced together are intended for audiences far beyond the studio. What is being subliminally posited to angry young Muslim men is that you go out there and kill Indians, Russians and Jews, in the order, and we will look the other way. Just stop planting bombs in our cities.

In essence, it is ruthless Machiavellian realpolitik. Hindus, Russians and the occasional Jew are fair game in this harsh world of murder and destruction, to be bartered for a bit of peace at home. Quite amazingly, mournful Hindus continue to mill around the slaughterhouse counter, inconsolable that they cannot offer succour to their would-be killers.

Dr. Gautam Sen is President, World Association of Hindu Academicians. He taught international political economy at the London School of Economics and Political Science for more than two decades.