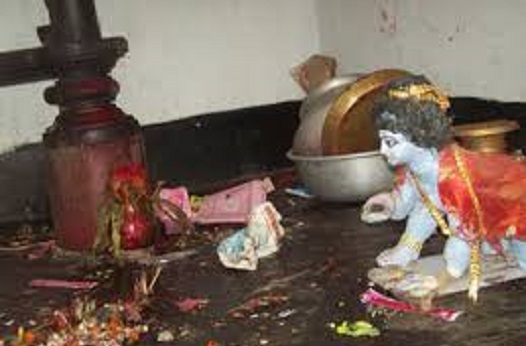 Report: Surjo Chandra is a resident of Ram Dakua which falls under ward no. 7 of Sundergonj Municipality in Gaibandha district, Bangladesh. On 22 December his family received threats from a Muslim group which was supported by the local Member of Parliament. Surjo stated that his sixteen year old, school going daughter Chandna Rani was raped by a certain Abdus Salam on the night of 22 September 2014.

Previously Chandana Rani was teased by Abdus Salam who is said to be an infamous local goon and is a known supporter of the ruling Awami League party. On the night of 22 September when Chandana Rani was asleep in her room alone, Salam broke into the room and attempted to rape her. When Chandana screamed in horror her parents were awakened and they captured Salam with the help of others. But after sometime a gang of armed Muslim goons assembled and rescued Salam from the hand of the villagers. Accordingly Surjo Chandra filed a case in the Sundergonj Police station. Even though the police were made aware of Chandana’s condition they did not arrange a medical test for her due to the pressure from the local MP.  Salam has not been arrested. On 20 December local Awami League supporters who are friends with Salam burned down Surjo Chandra’s shop. They threatened to kill him and his family if they do not leave the country. Police still did not take any action against the hoodlums and did not even the submit a charge sheet for the rape case since those thugs are friends with the MP.

Report: On 27 December 2014 a group of Muslim militants burned down the houses of many innocent Hindu families in the Nather Kandi village of Ujirpur Upazilla in Barishal district of Bangladesh. Mohammed Sobahan Hawlader, a local goon who often fabricated documents to grab the land belonging to the Hindus of the said area is said to be behind this incident. One of the victims, Nani Samadder told the reporter that Mohammed Sobhan Hawlader had been trying to grab their land for a long time. Nani Samaddar filed a complaint against Sobhan to the local administration asking for justice; as a result Sobhan Hawladar accompanied by his cadres burned the houses of Samadder as well as other Hindus of the area. According to Samadder the police has yet not taken any action against the accused.

A fifteen year old school going girl, Ritu Das was raped on 29 December. The accused was identified as Mohammed Khorshed Alam, Chairman of the Gunai Nagar Union Council in the Debidwar Upazilla, Comilla. The mother of the victim stated that while she, along with her daughter, was returning from the physician, the Chairman approached them on the road and asked Rita Das to go with him. Ritu’s mother tried to convince the Chairman to let her daughter go but sadly could not stop him from taking Ritu to the house of one Sabuj Miya, a lawyer in Comilla court. Following the abduction Chairman Khorshed raped Ritu repeatedly leaving her critically injured. According to the mother, when the Chairman went to bathroom, Ritu managed to phone her . The mother disclosed the incident to the locals and they went to the Kotwali model police station asking for help. When the police went to the location, the Chairman fled the scene and the girl reached home with the lawyer Sabuj Miya. A rape case was filed in this connection while the girl was sent to hospital for a medical test. In the meantime, Chairman Khorshed intimidated Ritu’s mother to withdraw the case if they “want to live in the country.”

Report: A Muslim youth has been arrested on the charges of marrying a Hindu girl after adopting a Hindu name, and also embezzling a crore of rupees. According to the police, the accused Imran Mohammad Rafique Sheikh is already a married man and a father of two kids. The victim is the daughter of a retired railway official and is herself a teacher at a school.

5.  Girl commits suicide after being forced to eat beef (mandatory) in boarding school

Report: According to an FIR lodged by the parents of Debahuti Talukdar at Dispur police station, Debhauti committed suicide after she was forced to eat beef by the Principal of Mount Hermon School where she was boarding. The parents alleged that when Debhauti refused to eat beef , she was told by the Principal that beef eating was mandatory in the school boarding. “When they have such a provision, this should be made known to each and every student  before taking admission,” said Debahuti’s mother, and added: “When my daughter opposed their move, the Principal and some other teachers framed some charges against her. She was accused of stealing the mobile set of a teacher. She was mentally tortured and her belongings were thrown out of the hostel. She came home and committed suicide.”

Report: On November 27, 2014, a Hindu youth Kamlesh Kumar son of Sajan Meghwar from the Guwahran village, Islamkot Taluk in District Tharparkar, a student of Mehran University of Engineering and Technology, has been abducted from Jamshoro by unknown persons.

Kamlesh was associated with Jeay Sindh Mutahida Mahaz (JSMM)’s student wing, Jeay Sindh Student Federation (JSSF). Rumors have it that he was abducted by the Pakistani armed forces. Kamlesh Kumar’s mother has lost her senses after hearing the news. Several protests were held in different cities of Sindh for the recovery of Kamlesh.

7. NA committee to take up the issue of Karachi’s madrassa girls

Report: The National Assembly’s Standing Committee on Law, Justice and Human Rights is meeting here on Monday (today) to receive a briefing on the recovery of minor girls from various places in Karachi last month. The committee will also take up two constitution amendment bills.

Report: According to the latest report prepared by the provincial government vis-à-vis the drought situation in Thar shows that 311 children under five years of age have died between December 2013 and November this year.

Report: Ms. Mavi Kolhi, a Hindu Dalit girl became the victim of forced conversion, appeared before the High court of Hyderabad where she was allowed to go with her parents as the honorable high court ordered that it is tested through medical report that her age is between 16/17 years. And so, as a minor she cannot get married according to the Child Marriage Restraint Act, 2013. The young girl Mavi also gave a statement that she prefers to go with her parents.

December 22, 2014: A teenage Hindu girl was abducted from Kunri, Sindh. Four armed men entered the Bheel community home and abducted the 13 year-old Sindhi girl Jago Bheel. The main culprit is Arshed Chandio. It was revealed that she was kept at Pir of Samaro Sindh.

On December 28, 2014: A 17-year old girl, Jamna, daughter of Misri Kolhi at the Nafees Nagar village in the Jhudo Taluka of district Mirpurkhas was kidnapped.

State of Hindus in Bangladesh: a Report