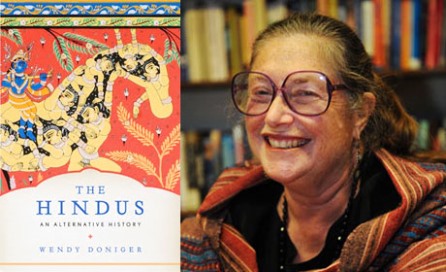 I do not believe in burning books, but Wendy Doniger’s 779-page tome titled, The Hindus: An Alternative History, 2009,  is a hurtful book.  It is laced with personal editorials, folksy turn of the phrase and funky wordplays.  She has a large repertoire of Hindu mythological stories.  She often narrates the most damning story—Vedic, Puranic, folk, oral, vernacular—to demean, damage and disparage Hinduism.  After building a caricature, she laments that fundamentalist Hindus (how many and how powerful are they?) are destroying the pluralistic, tolerant Hindu tradition. But, why save such a vile, violent religion, as painted by the eminent professor?  There is a contradiction here.

Doniger’s book is at odds with the increasing acceptance in the United States of key Hindu spiritual precepts.  Lisa Miller (Newsweek, 31 August, 2009) reports that Americans “are slowly becoming more like Hindus and less like traditional Christians in the ways we think about God, our selves, each other, and eternity.” Miller cites the following data:

The following review of Doniger’s very large book focuses on only one section:  the chapters dealing with the incursion of Islam into India.

As is well known, Islam entered Malabar Coast in south India with Arab merchants and traders in the 7th Century. This was peaceful Islam.  Later, Islam came to India as a predatory and a conquering force.  Mohammad bin Qasim ravaged Sindh in 711.  Mahmud Ghazni looted and destroyed numerous Hindu temples around 1000 CE.  The Muslim rule begins with the Delhi Sultanate, approximately 1201 to 1526.  The Sultanate gave place to the Mughal Empire in1526, which ended with the establishment of British Raj, about 1757.

I will take each one of these arguments and point out its falsity.

Alberuni, the Muslim scholar who accompanied Mahmud Ghazni (also known as Gazhnavi) to India in 1,000 CE, describes one such event:  “Mathura, the holy city of Krishna, was the next victim. In the middle of the city there was a temple larger and finer than the rest, which can neither be described nor painted.  The Sultan was of the opinion that 200 years would have been required to build it. The idols included ‘five of red gold, each five yards high,’ with eyes formed of priceless jewels. . . The Sultan gave orders that all the temples should be burnt with naphtha and fire, and leveled with the ground.  Thus perished works of art which must have been among the noblest monuments of ancient India.” [1]

At the destruction of another famous temple, Somnath, some 50,000 were massacred. The fabulous booty of gold was divided according to Islamic tradition–the Sultan getting the royal fifth, the cavalry man getting twice as much as the foot soldier. Women were sold into concubinage and children raised as Muslims.

Hindu sectarian violence existed but it pales in comparison to the level of violence that occurred under Islam. (See the riveting account of the history of pillage of minorities under Islam by Egyptian born Jewish writer Bat Ye’or.  Google her.)  The truth is that both Jainism and Buddhism were integrated into Hinduism’s pluralistic tradition.  The Buddha is regarded as one of the Avatars.  Exquisite Jain temples at Mt Abu at the border of Gujarat and Rajasthan built around 1000 CE survive in the region dominated by Hindu Rajput rulers, falsifying notions of Hindu carnage of Jain temples.

Doniger describes the invasion of Sindh by the Arab soldier of fortune, Muhammad bin Qasim as follows:

Qasim invaded Sindh in 713.  The terms of surrender included a promise of guarantee of the safety of Hindu and Buddhist establishments.  “Hindus and Buddhists were allowed to govern themselves in matters of religion and law.”  Qasim “kept his promises.” The non-Muslims were not treated as kafirs. Jizya was imposed but only as a substitute for military service for their “protection.”  He brought Muslim teachers and mosques into the subcontinent.  (paraphrased)

From Doniger’s assessment, Qasim should be regarded as a blessing.  Andrew Bostom in “The Legacy of Islamic Jihad in India,” provides the following disquieting picture, based on Islamic sources.[3]

The Muslim chroniclers . . . include enough isolated details to establish the overall nature of the conquest of Sindh by Muhammad b. Qasim in 712 C.E. . . . Baladhuri (an Islamic writer), for example, records that following the capture of Debal, Muhammad b. Qasim earmarked a section of the city exclusively for Muslims, constructed a mosque, and established four thousand colonists there.  The conquest of Debal had been a brutal affair . . .  Despite appeals for mercy from the besieged Indians (who opened their gates after the Muslims scaled the fort walls), Muhammad b. Qasim declared that he had no orders (i.e., from his superior al-Hajjaj, the Governor of Iraq) to spare the inhabitants, and thus for three days a ruthless and indiscriminate slaughter ensued. In the aftermath, the local temple was defiled, and “700 beautiful females who had sought for shelter there, were all captured.”

Muhammad massacred 6,000 fighting men who were found in the fort, and their followers and dependents, as well as their women and children were taken prisoners. Sixty thousand slaves, including 30 young ladies of royal blood, were sent to Hajjaj, along with the head of Dahar [the Hindu ruler]. We can now well understand why the capture of a fort by the Muslim forces was followed by the terrible jauhar ceremony (in which females threw themselves in fire kindled by themselves), the earliest recorded instance of which is found in the Chachnama. (Cited in Bostom.)

Doniger writes at page 458: when Muslim royal women first came to India, they did not rigidly keep to purdah (the veiling and seclusion of women).  They picked the more strict form of purdah from contact with the Hindu Rajput women.

Doniger finds much to praise in Muslim women during this period: some knew several languages; others wrote poetry; some managed vast estates; others set up “feminist” republics within female quarters (harems); some debated fine points on religion; some even joined in drinking parties (chapters 16, 20). Such descriptions are patently negated by other historians. See for example, The Mughal Harem (1988) by K S Lal, available free on the Internet.

If Hinduism is the source of strict purdah among Muslim women, as Doniger contends, how does one explain the strict veiling of women in the Middle East, a region far removed from Hindu influence?  Or, the absence of purdah in southern India, a region that escaped extended Islamic domination?

Doniger writes at page 627, “the Vedic reverence for violence flowered in the slaughters that followed Partition.” And, Gandhi’s nonviolence succeeded against the British.  But it failed against the tenaciously held Hindu ideal of violence that had grip on the real emotions of the masses.

Doniger blames “the Vedic reverence for violence” for post-Partition destruction that engulfed both India and Pakistan. What is one to make of this weighty pronouncement uttered in all seriousness by the author?  Could it perhaps be an expression of the hurt feelings on the part of a scholar? While discussing the Hindu epic Ramayana in London in 2003, Doniger put forth her usual gloss: that Lakshman had the ‘hots’ for his brother Rama’s wife Sita, and that a sexually-charged Sita reciprocated these feelings. An irate Hindu threw an egg at her and conveniently missed it.  This incident is her cause célèbre.

Part of a larger trend of Dhimmitude

Doniger’s scandalous book on the Hindus makes sense only in the light of a larger global trend—a trend that seeks to repackage Islamic history as a force for tolerance and progress.

Doniger is not alone in holding such views. Dhimmi attitudes of subservience have entered the Western academia, and from there into journalism, school textbooks and political discourse. One must not criticize Islam. For, “to do so would offend the multiculturalist ethos that prevails everywhere today. To do so would endanger chances for peace and rapprochement between civilizations all too ready to clash.”  See Bat Ye’or, http://www.dhimmitude.org/archive/by_lecture_10oct2002.htm

The field of Middle East Studies in the U.S. is now controlled by pro-Middle East professors, according to Martin Kramer, editor of the Middle Eastern Quarterly.  “The crucial turning point occurred in the late 1970s when Middle East studies centers, under /Edward/ Said’s influence, began to show a preference for ideology over empirical fact and, fearing the taint of the ‘orientalist’ bias, began to prefer academic appointments of native-born Middle Easterners over qualified Western-born students.”  Search the link at: http://findarticles.com/p/articles/mi_m1058/is_17_119/ai_90989239/.

In contrast, the field of Hinduism studies by and large is controlled by non-Hindus and anti-Hindus.  Hindu gods and goddesses are lampooned and denigrated.  Hindu saints are described as sexual perverts and India in danger of being run over by Hindu fundamentalists.  In these portrayals, Doniger is joined by Martha Nussbaum, Paul Courtright, Jeffrey Kripal, Sarah Caldwell, Stanley Kurtz, to name only a few. Unhappily also, the American born Hindu youth choose lucrative careers in medicine, law, finance and engineering rather than in the social sciences and the humanities.

Doniger is quite harsh on the British record in India (1757-1947).  She compares the British argument that they brought trains and drains to India to Hitler’s argument that he built the Autobahn in Germany (p. 583).  Censuring Britain and giving a pass to the more draconian Islamic rule fits with the dhimmi attitude described forcefully by Bat Ye’ or.  Consequently, attitudes of concession and appeasement are on the rise in the academia. A reversal of language occurs.  Jihad is called ‘struggle within’.  Dhimmitude is called tolerance.  Jizya is called protection.  No wonder that anti-Semitism is on the rise in Europe and on elite American college campuses.

(The author is Professor Emeritus of Political Science, University of West Florida)

[1] Vincent Smith, The Oxford History of India, Delhi, 1981, pp. 207-08. Smith derives his account of Mahmud’s raids from the account written by Alberuni, the Islamic scholar who traveled with Sultan Mahmud to India.

[2] See Ram Swarup’s Hindu View of Christianity and Islam, 1992.  And, Andrew Bostom, The Legacy of Jihad: Islamic Holy War and the Fate of Non-Muslims, 2005, at: http://www.andrewbostom.org/loj/.

[3] Published in 2005 in the American Thinker  by Andrew Bostom and available at: http://www.islam-watch.org/Bostom/Legacy-of-Islamic-Jihad-terrorism-in-India.htm