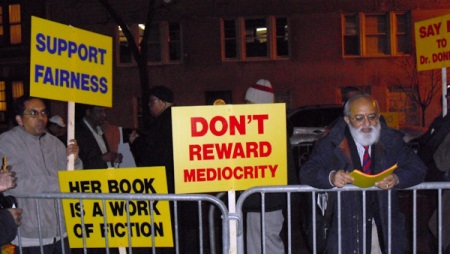 At the outset I must admit I am a Hindu, and apologize for the same. To improve my credibility I also admit that the holocaust happened; that Muslims are persecuted everywhere and that the way forward for the world is the template given by the White race with its superior Judeo-Christian religions and culture of liberal expression and individual freedom.

I also clarify, hopefully to the satisfaction of Ramachandra Guha, that I don’t drink milk in the morning, do not wake up at sunrise to do Pranayama, nor thereafter, like a Hindu troll spend some religious time bashing “deviant” liberals (remember Guha on Hindu trolls in Outlook magazine?).

Actually I am lying about most of the above-mentioned beliefs. In reality I am fed up of the manipulative “politically correct” yet strangely glorified “liberals”, the utterly confused, ill-motivated, foreign funded, India based, pseudo-intellectuals that have stayed back in an almost institutionally and intellectually bankrupt nation due to personal compulsions and have devised strange compromises for survival; A class that grew up fearful of grinding poverty, has succumbed to the intellectually repressive regimes of the Nehru-Gandhi clan, seeks favor from a patronizing, almost dictatorial, socialist structure and foreign funded lobbies in a nation that lives with blasphemous distortion of its own history.

On the other hand, the fact that the University of Chicago lets Wendy Doniger continue in her chair despite being discredited by several eminent scholars speaks of the ill-shrouded façade of fairness in the American intellectual establishment itself. It has long been exposed for what it really is.

However, the American intellectuals are dead serious about certain goals. They have worked hand in glove with American agencies to achieve USA’s political aspirations of Pax Americana, laying down visions for the achievement of a global society under American military, economic and cultural dominance, therefore strategizing against every perceivable threat. Its top universities have fervently discouraged and stifled pacifist and alternate researches, pandered shameful fascist philosophies – such as the clash of civilizations – and have sold their soul to the business and political establishment.

A strong Hindu India is a threat to any country in the world; it is a threat to the white supremacist, to the Jewish, Christian and Islamic right wing groups, the weapons peddling lobbies that realize that their ideologies face difficulties before the brilliance of the all-encompassing cosmopolitan cultural heritage of India. They recognize the fact that the “alternate lifestyle” movement is a huge worldwide phenomenon and is a direct cultural and economic assault, even though unintended by India; therefore in nature, a primary challenge to their dominance.

The US is the original Anarchist and suppressor of free speech; its response to any discussion that contradicts its vested interests is brutal violence, physical or in any other form. Its noteworthy notorious achievements, in the arena of freedom of speech in the last century include the kangaroo courts of the McCarthy era where lives of brilliant academicians and intellectuals were ruined ruthlessly if they were even mildly suspected of having faint links to the communist ideology. It’s the same country that witnessed cowardly assassinations of two Kennedys including a President, and of Martin Luther King. It’s the same country that propped up dictators all over the globe to repress development and freedom of expression under the garb of stopping communism.

However, the fact and big question remains: what we as Indians, have done to counter the Wendy Donigers of the world?

The Indian intellectual establishment is in doldrums since the beginning of the Nehruvian era. Almost all think tanks and universities are packed with professors pandering to Nehruvian socialism and the Indian history’s perspectives of his chosen coterie. No dissent was or is allowed. No intellectual or artistic freedom is imaginable. Research grants and materials are scarce and pathetic, political appeasement of minorities is rampant in a politically correct establishment. There isn’t and has never been any artistic or intellectual freedom in India post-Independence. Even in the 5 years that the BJP ruled, it packed universities with non-serious stooges.

India, a society that has a few centuries worth of the cultural heritage of debate as a central mechanism of resolution, has assaulted the mechanism of debate to death under the semi-dictatorial Nehru, Indira and their obliging stooges.

Not even a handful of intellectuals from within the Indian establishment of think tanks, newspapers, magazines and Universities have gone hammer and tongs after Doniger. Why? Why are Indian intellectuals not standing up and forwarding explanations on Indian philosophy and our way of life to counter Doniger and the raft of substandard PhDs that her department has awarded to her accomplices? Why are the newspapers not covering them? Why have they not invited her to conferences and exposed her? Had they done the same convincingly and publicly then the man on the street would not have shown such desperation. Penguin would have found Doniger a waste of money.

Most Indian intellectuals, majority being left of center, wear rose tinted glasses believing the world to be a beautiful place, and that practicing Hindus have almost always been wrong and unfair. They romanticize the brutality of India’s invasion in the past, expound theories on India’s lack of a coherent identity and fail to acknowledge that the nation is under constant attack from enemies on the cultural front just as it is being attacked on the economic and territorial front. They should accept the fact that India is being attacked not only by its Islamic and Chinese neighbors but also by distant nations in Europe and the US. And that these attacks are logically justifiable to the adversary and therefore need countering on all fronts.

Today there is a total disconnect between the so called Indian intellectual and the masses, the common man. Most Indians crave an intellectual roadmap that leads to an Indian renaissance not just economically but culturally too, similar to the intellectual victories of Buddha and Shankara. The Indian is a pacifist. It is his cultural heritage. Indians reject fascism unlike that claimed by an increasingly spaced out Arundhati Roy. She comes across as a pseudo-liberal, if not a liberal fanatic. Despite her rants most Hindus still fold their hands in reverence while walking past a Church and in the not so distant past did so before mosques too. Hindus realize that their decency is not reciprocated and therefore now want to act towards self-preservation.

It’s unfortunate that there is much hue and cry about the pulping of Wendy Doniger’s book. The publisher could have rejected it on its own merit had there been a vibrant intellectual environment in the country that could have countered Doniger’s sub-standard dated methodology, poor logical skills and lack of professionalism.

The intention behind her writings is questionable. One fails to understand why most of our intellectuals, aptly called “Wendy’s children” by Rajiv Malhotra, have different criteria for Salman Rushdie and Taslima Nasreen on the one hand and Wendy Doniger and her ilk on the other. Will Arundhati Roy and Ramchandra Guha support Wendy if she were to write about the Prophet’s penis size or discuss his prolific sex-life with similar fervour?

Double standards, bias and hatred describe Wendy’s children. I sincerely hope that Arundhati Roy and Ramchandra Guha ask Penguin to cancel their contracts as well so that Penguin can finally shut shop. The nation should be ready for more such reactions from the public as has been done against Doniger. Her hatred as well as the foolishness of the Indian intellectual has been exposed in all its ugly glory.