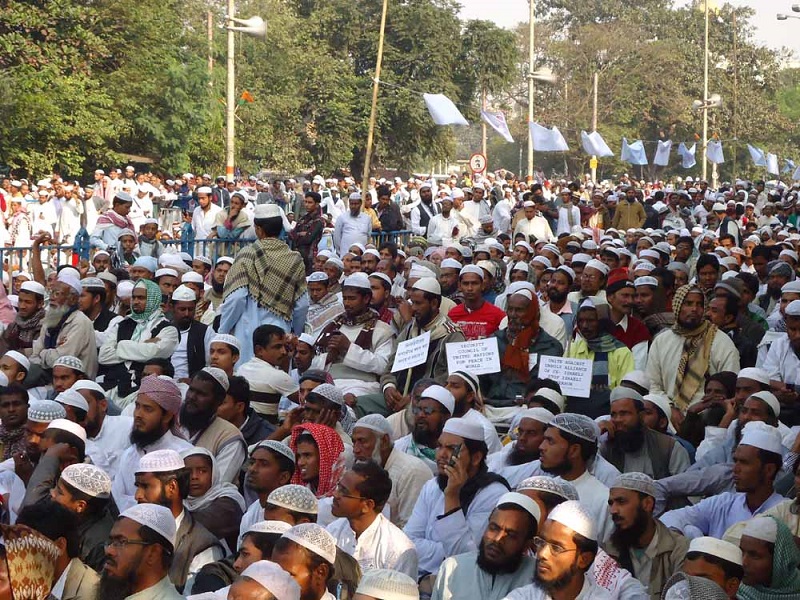 Uninspired by the need to safeguard India’s national security, Mamata supports jihadis on West Bengal soil, who aim to establish an Islamic Caliphate in the West Bengal and Assam by driving out non-Muslims

In 2014, West Bengal Chief Minister Mamata Banerjee refused to meet the US charge d’affaires ambassador,Kathleen Stephens during her visit to Kolkata because she got a call from Mohammed Noor-Ur-Rehman Barkat, Imam of Tipu Sultan Mosque of Kolkata.

The imam and other leaders of Jamaat-e-Islami warned her against developing business ties with the US. Thus Mamata Banerjee presented herself as being keen to be seen as anti-US and pro-radical Islamist.Things went to a dangerous extent when she forced Sharada group to buy at an inexplicable huge price a pro-Islamic newspaper, Kalom owned by Ahmed Hassan Imran, former state chief of SIMI who has links with radical Islamic outfits across the border.

Imran and his alleged connections were behind the communal violence that took place in South 24 Parganas district in February 2014. A document revealed that Imran was the mastermind behind the communal conflict at Naliakhali village in South Bengal. Imran was rewarded with a Membership of Parliament by Mamata in February 2014, despite the West Bengal police’s negative report.

In the 2014 general elections in India,Jammat-e-Islami had openly canvassed for the TMC—Abdul Barik Biswas, was seen on a dais with Trinamool MLA actress Debasree Roy. The state government blocked a liberation anniversary rally in Kolkata in 2013 and instead, gave support to Jamaat-e-Islami to organise its own anti-India show of strength. A massive rally was held in Kolkata on 30 March 2013, explicitly against India’s liberation of Bangladesh and in support of Pakistan and the war criminals already convicted. Various Muslim groups, including the All Bengal Minority Council, the All Bengal Minority Youth Federation, the Madrassa Students Union, the Muslim Think Tank and the All Bengal Imam Muazzin Association, organised the rally.

Students of madrassas and the new Aliah Madrassa University were conspicuous at the gathering. Incidentally, it was from the same ground Maidan in August 1946 that the call for ‘direct action’ was given by the Muslim League.The way the March 2012 Maidan meeting was facilitated and the manner in which Sidiqullah received permission for the gathering and was allowed to spew poison against India indicate that there exists a tacit support by West Bengal’s ruling party for the increasing volubility of these groups and for their unhampered consolidation of Militant Islamists in West Bengal.

Mamata had initially tried to stall any attempt by the Centre to facilitate investigations into the Burdwan blasts whose roots and links go deep beyond India’s boundaries. It took her a fortnight to hold a press conference on the blasts and the Centre’s offer of investigative intervention.

Jamaat is also responsible for communal disturbance in West Bengal in places like Canning and Deganga.The rise of Jamaat and other militant Islamist organizations have led to communal clashes increasing in the state. According to state police reports, 106 incidents of communal clashes were recorded in West Bengal in 2013, 42 of them being major ones where Hindus in rural areas were targeted, particularly in border districts.

A Christian missionary based in South Africa and author of 40 books, Peter Hammond delineates how societies change in his book, Slavery, Terrorism and Islam. Citing examples of countries worldwide, Hammond outlines typical activities that occur as the demography changes.It is a warning bell about the gradual, step-by-step changes that can be expected in Assam and West Bengal.

This is something very similar to what the Hindus in the Kashmir valley underwent in the late 80s and 90s: the indigenous population of Assam and West Bengal are losing land and livelihood, and are forced to migrate as laborers to safer locations. The rape of a catholic nun in March 2015 in the border town of West Bengal by a Bangladeshi criminal Sikandar Shaikh and his gang, the threat by SIMI to assassinate a leading monk,Swami PradiptanandajiMaharaj of Bharat Sevashram Sangha…all these point to a dangerous trend.

The NIA had pointed to Mamata Banerjee that 500 recognized and 4,000 unrecognized Madrassas are engaged in indoctrination, recruitment, training and sheltering of jihadis. As per the NIA, there are 58 terror modules operating in the state. The objective of the jihadi outfits in West Bengal is to provide a safe conduit for manpower resources to al-Qaeda and ISIS.

It is not mere coincidence that some Indian Muslim youth, especially from Andhra Pradesh and Maharashtra, willing to join the two organizations were headed for West Bengal for their onward jihadi journey. It was pointed out to Mamata that her refusal for not allowing the state police to raid Simulia madrasa where the jihadhi training camp was conducted, helped the key jihadist Yusuf Sheikh to flee. The state had also seen protests after President Pranab Mukherjee ordered the execution of the Supreme Court order to hang Terrorist Afzal Guru, all indicating the growth of Jihadist tentacles in West Bengal.

Another area of concern for security agencies is the mushrooming of Muslim organizations, many of them in the form of NGOs with more of political-religious agenda and cross border sources of funding. According to West Bengal Minority Affairs Department, 400 Islamist NGOs cropped up during 2012 and 2013.

Why does Mamata publicly recite the Kalima Shahadat, the Islamic conversion prayer, in front of an audience of imams? She has announced a series of schemes for the Muslim community.(Mamata for Muslims Indian Express March 14 2014 ). Special allowances for imams and muezzins of West Bengal, giving recognition to all Kharezi in West Bengal (unorganised madrasas—10,000 of them operate in West Bengal), reservation in jobs along benefits of Housing (exclusive Islamic townships), stipend, scholarship, vocational training for Muslims, reservation for Muslim teachers, a Medical College at Diamond Harbour and a Polytechnic at Baruipore with reservation for Muslims and hostels for Muslim girls and Muslim-only hospitals.

She approved and validated the academic degrees of 10,000 previously unrecognised madrasas,building four Muslim towers and five new Haj Houses, a provision of five acresof prime land in the Rajarhat area.

It’s significant to note that while she opposed land acquisition reforms initiated by the Modi government for development, she is open to doling out land for Islamic institutions only. Free bicycles and laptops for Muslim students In order to keep the Urdu speaking Muslims happy; Mamata is writing a book on Urdu Shayari. She also made an Eid announcement after offering namaz “wait for my book on Urdu Shayari”.

Both Mamata and previous Communist governments claim that the state’s Muslims made progress under their rule – the state is now ranked first when it comes to development of Muslims. In which case, why does the West Bengal government need to give such massive resource allocations to Muslims alone? On 28 Feb, 2015,the Special Task Force seized fake currency notes of India, US and a few other countries along with currency printing equipment, chemicals, stamps and cheques in the heart of Kolkata valued over Rs 10 crore.

Indicating the Dawood Ibrahim-ISI-Jamaat network’s deep penetration in West Bengal, Kolkata is now the hub of terror funding business. Mehdi Masroor Biswas, arrested by Bangalore police earlier in 2015 for operating a pro-ISIS Twitter is the new breed of the well-to-do,educated, tech-savy Bengali jihadist from Kolkata.

West Bengal-born Mehdi was an electrical engineer with a MNC, his father is a retired government employee.One cannot forget the fact that in the last decade and half, every major terrorist activity has a West Bengal connection.

It’s the Harkat-Ul-Jihad-i-Islami (HuJI) of Bangladesh with links to Pakistan’s Jaish-e-Mohammed that carried out blasts on board the Patna-Delhi Shramjeevi express.

One of five identified in the Delhi blasts was Mehboobque Ali Mandal of North 24 Parganas West Bengal. It’s significant to note that Mamatahas never criticised the Jamaat-e-Islami or any other terrorist organisation. She did raise the issue of persecution of religious minorities during her Bangladesh visit in February 2015.

The rot runs deeper. In Class 8 history textbooks of the West Bengal Board of Secondary Education, the activities of freedom fighters like Khudiram Bose, Jatindranath Mukherjee and Prafulla Chaki have been termed as extremism and terrorism.By labelling freedom fighters as terrorists, Mamata is trying to pander to the elements who view India with hate.West Bengal is failed state today where even the police and judiciary are finding it difficult to operate.

According to National Crime Records Bureau (NCRB), the number of political murders recorded in West Bengal during in 2013 is estimated to be 300.The killing of 19-year-old Sourav Choudhury on June 2014, a college student who led a movement against the liquor mafia is a pointer to the law and order situation in West Bengal.

Mamata is the only Chief Minister who stormed into a police station to free arrested goons. In 2014, the French MNC ABG-LDA-promoted HBT exited Haldia port on the grounds of unsafe work conditions in West Bengal. This is yet an example of the business environment of West Bengal under her dangerous regime.

Unlettered in the ideals of national interest and uninspired by the need to safeguard India’s national security, Mamata Banerjee supports jihadists on West Bengal soil, who aim to establish an Islamic Caliphate in the West Bengal, Assam, and Bangladesh by driving out non-Muslims as revealed by the discovery of Al Qaeda pamphlets in October 2014.

If politics and power blinds her, neither she nor the state will be spared from being consumed by jihadi fire. The rise of Narendra Modi and Indian Nationalism is a great opportunity to save Eastern India.Indeed, Modi has been giving great attention to eastern India’s development and security needs. Indians of eastern India should not miss this opportunity to revive their past glory by rooting out jihadis.