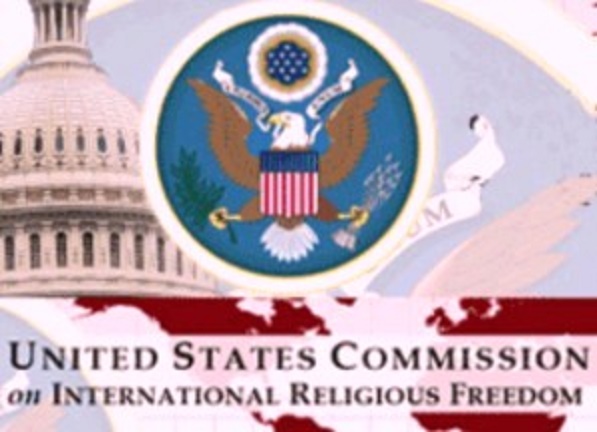 U.S. Commission on International Religious Freedom (USCIRF) is scheduled to release its annual report on May 2. Each year, after the annual reports are released, most media outlets blindly peddle the USCIRF propaganda. It remains to be seen whether this year’s report will be less biased and more factual or not.

When India denied visa to USCIRF recently, Govt. of India’s IB officer stated that USCIRF reports are based on “half-truths, hearsay and standalone cases”. But media portrayed USCIRF as neutral bi-partisan commission, and headlines proclaimed “What is India hiding?”; however, the real question is “What is USCIRF hiding?”.

The Vatican is the largest O&E religion. Word ‘Vatican’ appears 107 times in USCIRF reports. In most cases, USCIRF is advocating Vatican’s right to control Asian churches, canonize Asian saints, appoint and excommunicate Asian Bishops. USCIRF opposes the idea of localizing church in Asia. If USCIRF truly believes in Vatican’s right to lord over foreign churches, then it should also demand that the Church of England, & all other catholic cathedrals confiscated during protestant reformation, be given back to the Vatican.

USCIRF’s double standard could be further seen in its treatment of Christian and non-Christian countries on visa and foreign funding matters. The word ‘visa’ appears 147 times in USCIRF report. It is mostly about organized religion and Christian Clergy’s right to visit foreign countries and visa for the propagation of the faith, but visa to a foreign country is not a right. It is a permit to be earned by displaying good faith. USCIRF opposes all regulations on foreign funding in India. In a testimony to the US Congress on April 4 2014, USCIRF attacked India’s Foreign Contribution Regulation Act.

USCIRF claimed that the FCRA is a “Facially Neutral law that has been used to discriminate against Religious Minorities in India” but it did not provide any data supporting this claim. In sharp contrast, USCIRF describes Austria’s explicitly discriminatory law as reform. In April 2015, Austria passed a controversial law aimed at cutting off foreign funding for Islam (but not Christianity). It issued a blanket ban on all foreign donations to all Islamic charities and placed severe restrictions on foreign imams. USCIRF tweet describes it as reform:

There is a greater need for regulation of foreign funding, strict visa rules, and criminal background check in poor countries because the poor are more vulnerable. Overly aggressive foreign priests, misuse of foreign funds, and predatory proselytization is a threat to the poor people’s Individual right to act as per conscience. USCIRF double standard is harming religious liberty of poor, vulnerable, and at-risk non-Christian individuals. This reminds me of Religious Freedom jingle “I am free to practice my religion and you are free to practice mine”.

USCIRF is a strong critic of religious practices denying women’s right (i.e. rights other than right to choose) and sexual abuse in the name of religion. But, this criticism is mostly targeted at non-Christian religions. The word ‘child’ appears 501 times in USCIRF annual reports. USCIRF addresses range of issues like child soldier, forced labor, etc. but USCIRF hides child sexual abuse by Christian clergy. Far worse, in the issue of sexual abuse of 20+ kids in India, US Department of State (not USCIRF) 2008 Religious Freedom report paints accused Pastor Jacob John as innocent & vilified complainant. Pastor John Jacob faces grave charges of abusing 53 kids. One child is pregnant and four children died. Catholic Church sexual abuse scandal is the largest sexual abuse in the name of religion. It spans 15+ countries, all continents, 4392 accused priests in US alone, 3000 lawsuits in US alone, and thousands of victims between the ages of 3 and 14. Several USCIRF commissioners have played an intimate role in the Catholic Church sexual abuse scandal yet USCIRF reports are mum. As per IRFA law, USCIRF should champion children’s religious freedom, provide reform recommendations to the Vatican, and place the Vatican in its tier two watch list.

USCIRF commissioner 1999-2001 Cardinal Theodore McCarrick is a major figure in managing fall out of the sexual abuse scandal. He is prince of the church, a top level cleric, and spokesperson of the American Catholic Church’s zero tolerance against sex abuse policy. In a media briefing, He articulated multi-step process against accused priest and repeated pontiff’s message ”there is no place in the priesthood and religious life for those who would harm the young” but the Google search result of “Cardinal Theodore McCarrick church sexual abuse scandal” is unsettling:

USCIRF commissioner 2001-2003 Most Reverend William Francis Murphy is a controversial figure in the sexual abuse crisis. Massachusetts attorney general stated that Murphy “placed a higher priority on preventing scandal and providing support to alleged abusers than on protecting children from sexual abuse”. The Catholic League praised Murphy’s actions on sexual abuse issues and stated that Massachusetts did not require clergy to report abuse.

USCIRF commissioner 2003-2007 Most Reverend Ricardo Ramirez is a main figure in managing fall out of the sexual abuse scandal in Las Cruces, New Mexico. Catholics believe that he has done a great job in managing sexual abuse crisis, but in 2002 he sent out a letter denying sexual abuse lawsuits. The family of three boys, who were sexually abused, pointed out that the letter is misleading. Victim’s sister Vicki Francis said “This letter essentially, I feel, is raping my brothers all over again. I’m so angry, I can hardly stand it.” Ramirez expressed regret and stated “…In retrospect…I would do it differently.”

USCIRF commissioner 2003-2007 Most Reverend Charles J Chaput was appointed by President George W Bush. He is a main figure in managing fall out of the sexual abuse scandal in Philadelphia. Catholic groups praise his crisis management skills, but others see hypocrisy. His views on Democracy and Nation are quite controversial. According to 2004 New York Times report, Chaput took the position that it is sinful for Catholics to vote for fellow catholic and Democratic presidential nominee John Kerry. He said that those who intended to vote for him were “cooperating in evil” and needed “to go to confession”. In other words, Catholics should vote for President George W Bush who appointed Chaput to USCIRF. On political affiliation, Chaput stated that absolute loyalty to the Catholic Church’s teachings must be a higher priority for Catholics than their identity as Americans and political affiliation. How is this different from Islamists demanding loyalty to Islam?

Current USCIRF commissioner Reverend Thomas Reese is a Jesuit priest and a journalist. He has covered sexual abuse scandal and criticized church’s handling of the scandal. In 2009, Reese wrote an article criticizing the media’s double standard, one for ungodly Hollywood & another for godly Church, in sexual abuse cases. He complains that priests are criticized more harshly than Hollywood celebrities but he should be grateful to media. Media coverage does not display any mala fide intention of destroying the catholic way of life. It is not filled with hearsay, vilification of victim and outright fiction. Media is not lying under oath. USCIRF reports are far worse than media coverage.(1) (2) (3) (4)

“Religious Freedom” is a predatorily crafted con. The strategy is to first establish a false narrative implicating prey and then demand action against prey. For instance, USCIRF creates spectra of “Hindu Terrorism”. Its international report covering 194 countries gives the impression that terrorism is Hindu and most extremists are Hindus:-

The spectra of “Hindu Terrorism” implicates victim. Hindus are victim of religiously motivated violence in India. Nearly all terror groups operating in India are non-Hindu. Hindu temples, ashrams, pilgrims, and train passengers are the prime terror targets. In the last 35 years, about 100053 Indians have died due to terrorism. 99.87% of this terror deaths are due to non-Hindu terrorism (5) (6) (7) (8) (9) (10):

Note: Christian & Leftist numbers are understated because data for 1980s decade is not available. Leftist terror groups, like NDFB, are dominated by Christians and prefer Christian way, but they are not included in the Christian terror list.

USCIRF has directly and indirectly demanded action against Hinduity. USCIRF 2013 report urges India to grant enforcement powers, including to conduct trials, to National Commission of Minorities. USCIRF 2011 report urges the Supreme Court of India to investigate the Special Investigative Team which gave clean chit to Narendra Modi. It also urged government of India to allow all efforts to bring a case against Narendra Modi. USCIRF should rest easy because the then Indian establishment had tried its best to implicate Modi. The then Home minister of India had allegedly fudged evidence to frame Modi as well.

“Religious Freedom” is slyly paired with “Discrimination”. Together they make a lethal pair where one is used for offense and another for defense. The double-standard strategy is based on “My fomentation is Religious-freedom, but the prey’s reciprocation is discrimination”, “I have religious freedom to cry-wolf and whip up hatred, but the prey must stay calm”, “Terrorists are presumed-innocent, but the prey is presumed-guilty”.

Both, US state department and USCIRF, report are littered with double standards. USIRF defends powerful mullah’s religious-freedom to describe Hindu festivals as ‘demonic’, but a Hindu youth allegedly insulting Islam on Facebook is anti-Muslim discrimination. Influential mullah’s high-profile media interviews can foment violence and USIRF has no problem with it. USIRF opposes the mullah’s arrest, but not the youth’s arrest. Minister Jyoti, a Dalit woman, describing political opponent as bastard is twisted into anti-Muslim discrimination. Alarmingly, USCIRF does not condemn attack on Hindu ashram and the massacre of 5 people, including 84 year old Monk, women, and children. USCIRF does not defend Hindu monk’s right to propagate his religion; instead, it wrote that Monk Saraswati was fomenting violence against Christians. USCIRF also opposed court verdict declaring seven Christians guilty of massacre. USCIRF is crying wolf over alleged church vandalism, but is silent on the sinister attempt to blame Hinduity for 2008 Mumbai bombing. Far worse, On July 7 2013, Bodh Gaya temple is attacked by Indian Mujahedeen terrorists, but USCIRF 2014 report portrayed Monk Arup Brahmachari as sole suspect. USCIRF describes Monk Arup as a “Hindu priest”, but many media outlets describe him as “Buddhist Monk”. This report strengthens terrorism. (11) (12) (13) (14) (15)

USCIRF should rest easy because India is precisely following its recommendation for last 65 years. In India, the number of abuses heaped on Hinduism vastly exceeds abuses heaped on others, but India’s Supreme Court has never punished a publisher for insulting Hinduism. In contrast, five publishers were punished for insulting Islam or Christianity. 80% of all hate-speech arrest, or censor, is for insulting non-Hindu religions.(18)

Christianists exhibit a deep rooted antipathy for non-Abrahamic or the so-called idolatrous religions. On his radio show, USCIRF commissioner Richard Land 2001-2012, of Southern Baptist Convention, said “the devil takes pleasure in anything that causes destruction in human society and the homosexual lifestyle does cause destruction”. He portrayed California marriage fight as a Christian struggle against pagan practice.(23)(24) In his book “Imagine! A God Blessed America: What It Would Look Like and How It Could Happen“, He wrote that Hindu tradition is “superstitious” and “cruel”. In 1999, an Anti-Hindu booklet was produced by The International Mission Board of the Southern Baptist Convention. This booklet equates Hinduism with devil worship. (25) (26) Commissioners should remember that evangelicals have hate speech right, but USCIRF, bound by IRFA law, have no such right.

(*) This article is inspired by @sighbaboo‘s investigation of Pastor Jacob John Case.