What is Wrong with Ro Khanna? 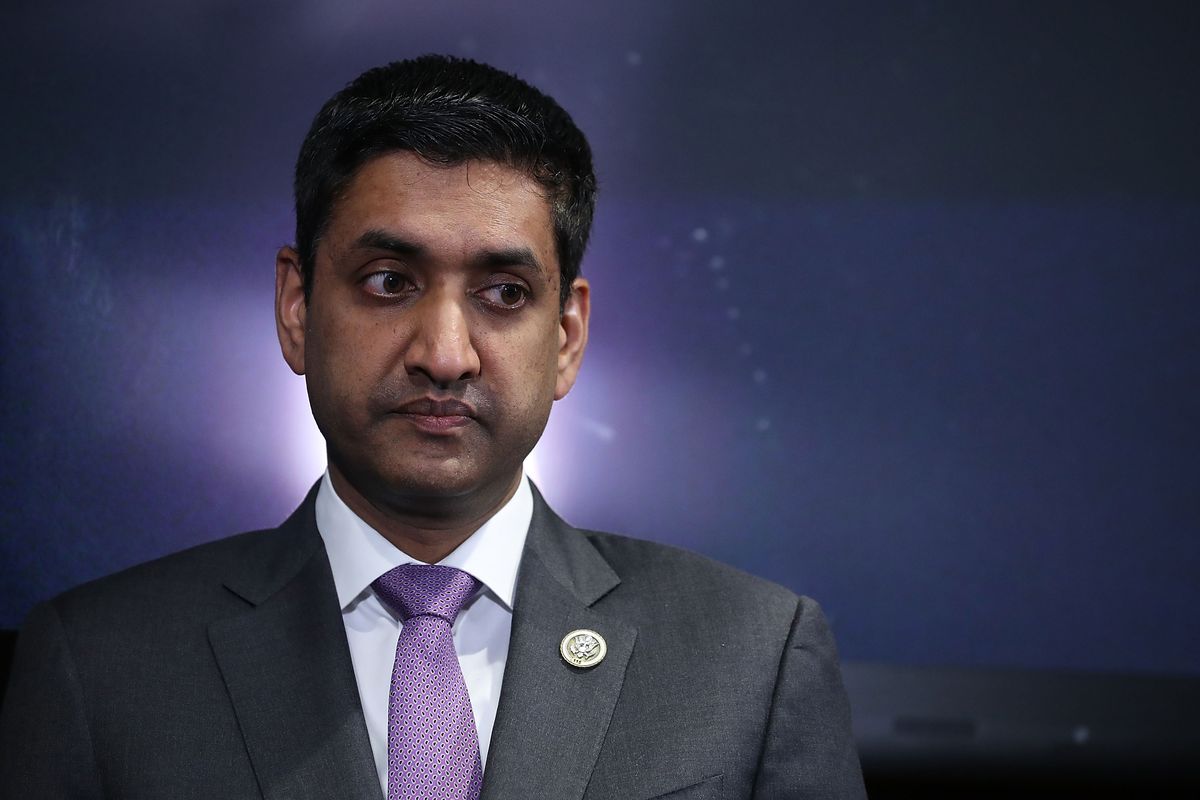 He is 43 years old, was born in Philadelphia to Punjabi parents, has a BA from the University of Chicago, and earned his JD from Yale. He served in the Obama administration as a Deputy Assistant Secretary in the Department of Commerce. He ran for Congress in 2004 and 2015, unsuccessfully, before winning the Democratic primary from California’s 17th Congressional District in 2016 beating Mike Honda by a thin margin of about 2,200 votes, and then beating his Republican rival to secure the seat. He won because he not only had top Obama campaigners working for him but also got a lot of the Silicon Valley tech honchos to back him, not to forget the support of most of the Hindu-Americans in that district. He claimed he wanted to move the “Democratic Party to a more progressive stance”. Did he mean to say that he wanted to have a Hindu/Indian voice in the party, and give it some prominence? We waited expectantly.

Now, it seems, the Indian/Hindu American supporters have got to know what that “progressive stance” is about — including Ro Khanna’s shrill denunciation of “Hindutva,” and becoming a member of the “Pakistan Caucus” in the House of Representatives. We could have let his dangerous, idiosyncratic and self-serving move be, but in a Twitter post, soon after, he supported the terrorist-affiliated Pieter Friedrich who had written a 20-page scurrilous screed against Rep. Tulsi Gabbard in India’s Caravan magazine. Pieter Friedrich, whose tweet against Rep. Gabbard that Ro Khanna endorsed, is a known Hindu-baiter and who has hobnobbed with men who have terrorist links. Not only was Friedrich’s screed targeting Rep. Gabbard, a self-proclaimed Hindu (unlike Ro Khanna who fights shy of asserting his Hindu identity), it was an attempt to paint all Hindu activism and activists in the US as supporters of some kind of exclusivist Hindu agenda that targeted “all minorities” in India.

Before tweeting support for Friedrich’s screed, Khanna’s office must have done some due diligence, you think. Either they did and ignored what they found, or they thought that the drumbeating against India in the media echo chambers was what they could march to. Ro Khanna has now joined the gang of anti-India doggerel singers, mimicking their cheap and hateful versions about Hindus, the Bharatiya Janata Party, about Narendra Modi, and about Hinduism. He has calculated that this move will earn him political capital among the so-called “progressives” (as news reports already show), and that he could treat the loosely tied together, difficult to herd Hindu electorate as dispensable.

According to the Hindu American Foundation (HAF), Friedrich, who claims to be a “South Asia analyst,” does not have one single credential — academic, work, travel — to corroborate his self-acclaimed status as a South Asia analyst. What we know about him, however, should make us pause, and should have made Rep. Khanna take a deep breath before endorsing this hateful, Hinduphobic bigot. Friedrich is a Hindu-baiter who has slandered Hindus and Hinduism in online portals and social media sites, as well as on homemade videos which he has uploaded to social media sites, according to HAF.

More damningly, as HAF points out, Friedrich is affiliated with an anti-India activist group called Organization for Minorities of India (OMFI). This organization was founded by Bhajan Singh Bhinder, who was the subject of an undercover US Customs Service investigation for trying to purchase C-4 plastic explosives, M-16s, AK-47s, grenade and rocket launchers, and Stinger missiles in support of the separatist, violent, Khalistan movement seeking to have Punjab secede from India. Ro Khanna’s parents are from Punjab. Does he not understand these dynamics, or is he playing with fire? Pieter Friedrich has been OFMI’s spokesperson for a long time, and Bhinder has also served as a spokesperson for the “Sikh Youth of America”, a radical organization that glorifies Sikh terrorists and has alleged ties with the International Sikh Youth Federation, a US Department of State designated terrorist organization under E.O. 13224. That OFMI supports Ro Khanna’s Hinduphobic stance should therefore not come as a surprise.

We do not know how Friedrich sustains himself or who funds him, but he has been seen harassing Hindu-American children waiting in line to testify at the California State Board of Education about the depiction of Hindus and Hinduism in California state school textbooks. According to HAF, Friedrich has been allowed to testify at the California State Board Education between 2015–2017, and he has taken those opportunities to abuse and denigrate Hindus, Hinduism, Hindu-American activism, and demanded that the textbooks for school children continue to denigrate and demean Hindus and Hinduism. Rep. Ro Khanna seems therefore to not only countenance this bigot, but he also fully supports Friedrich’s anti-India activities and views.

What is wrong with Ro Khanna? That is the question Hindu-Americans are asking, and for which, we believe, we have some answers: Ro Khanna wants to be considered a “progressive”. Being a “progressive,” in American politics, can mean anything, and the group can and does include all kinds of extremists, supremacists, violent anarchists, religious bigots, racists, anti-Semites, and Hinduphobes. Thus, we see on Ro’s twitter feed, Pieter Friedrich given a free rein, and a whole bunch of anti-India, anti-Hindu bigots who have posted anti-Hindu screeds in response to his post on “Hindutva”.

Not stopping at taking pot-shots at Hindutva, which the otherwise vocal representative has not bothered to explain or clarify, Rep. Khanna has joined the “Pakistan Caucus” stating that he wants to “promote peace in the region”. Really? A representative who took the support of Hindu-Americans to win the election from the 17th District and now demonizes them wants to bring peace to “South Asia”? Talk about chutzpah, talk about brazen hypocrisy, and talk about idiocy by a blinkered politician who seems to be keeping his sights on a presidential run in the next couple of election cycles. Does he even know what Pakistan has been up to since it gained independence, and how many Pakistan-trained terrorists have wrought havoc on India? Does he remember 26/11/2008 — the day Mumbai was brought to its knees by ten Pakistan-based trained terrorists of the Lashkar-e-Taiba who killed 174 people and wounded more than three hundred? Does Ro Khanna remember the 2001 attack on India’s Parliament building, again by Pakistan-based Lashkar-e-Taiba and the Jaish-e-Mohammed (JeM)? For heaven’s sake, does he remember this year’s Pulwama attack, in which 40 Indian soldiers were killed by a suicide bomber, also belonging to the JeM? Pakistan has not apologized for even one of these dastardly terrorist attacks. But who shall show Ro Khanna his place since the Democratic Party has wildly lurched leftward, blinkered itself from seeing the hate propagated and violence perpetrated by Islam-inspired groups? These “progressives” also seem to ignore the actions and ideology of Left-Marxists who have ground to dust their critics in India or who have suppressed dissent anywhere they rule in the world. They have not only ignored the hateful and destabilizing campaigns of Christian supremacists who want to make India/the world Christian they countenance it by saying that these supremacists are merely exercising their right to free speech. Thus, Ro Khanna has now become part of the “progressive caucus” which has cozied itself to faux progressives who run with the “colored” and hunt with the “supremacists”. This is what Ro Khanna now stands for.

Khanna, who seems to consume news selectively, may not have heard what Pakistan’s Prime Minister has said about Kashmir and Modi recently, including during the address to his nation on August 14, 2019, when he compared the BJP to Nazis. Pakistan, which has been identified as the center for terrorist training and export, now wants to tell the world that it is India that is “fascist” and inspired by “Nazi ideology,” and Rep. Khanna seems to have bought into the idea… just for the time being, while he solidifies his image among “progressives,” and builds his vote-bank to beguile us all into thinking that he is a politician we can trust.

We can dismiss Ro Khanna as another witless, hypocritical fool, or see him for what he really is: an unprincipled, bigoted politician who bites the hand that has fed him. His maternal grandfather, Amarnath Vidyalankar, was an Indian patriot who worked with one of the great Indian nationalists, Lala Lajpat Rai. A member of the Hindu Mahasabha in the 1920s, Lala Lajpat Rai was not shy about criticizing Muslims for their violence against Hindus. Lalaji, as he was known, was so convinced of the brutality of Muslims in the region that he argued for a separate state for them. But Ro Khanna wants to selectively sup from the political plate of his grandfather, and worse yet falsely accuse Hindus, the Bharatiya Janata Party, and Prime Minister Narendra Modi of supremacist beliefs. The grandson has proven himself to be a classic American conman politician, claiming to be a progressive but now publicly in bed with the terrorist state of Pakistan.

Despite the urging of about 230 Indian-American organizations which have asked him to resign from the Pakistan Caucus, Khanna is holding fast. We cannot educate him, it seems, and it seems he is intent on building his voting bloc drawing from the myriad “minority” anti-India fronts that have mushroomed in the US, all intent on destabilizing India. He is counting the votes, and so is assured that we cannot numerically defeat him. So, we can wait and watch and see which of the chameleon colors he will continue to display, and to what gallery he will dress up to play, or we can shame him, scold him, and describe to the world his true colors.