A maharathi without a rath: the meaning of being Koenraad Elst 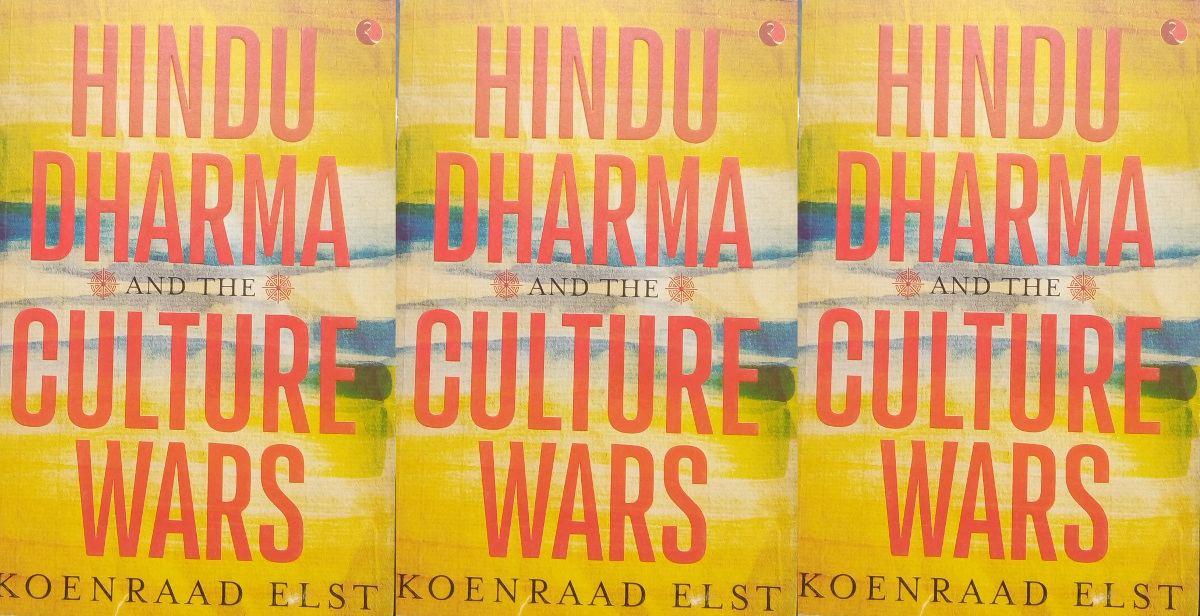 Koenraad Elst has coined two evocative terms to help understand Indian socio-political situation: ‘Negationism in India’ and ‘Decolonizing the Hindu mind’. These are also the names of his two most important books published in 1992 and 2001 respectively. Going through just these two books one can understand his great contribution to current Indology. Yet his assistance to the Hindu side on the Ayodhya debate is as significant, though surprisingly little known even to Hindutva leaders.

In fact, the Ayodhya issue changed the course of Koenraad’s life. He was incidentally in India when the controversy erupted on the national scene. He observed the falsehood being spread by eminent Marxist historians and liberals in Indian media, and could not resist the urge to fight it out. The common adventurer in this European young academic decided to take it on, even without any support. Except that Sita Ram Goel decided to publish his first book: Ram Janmabhoomi vs. Babri Masjid, A Case Study in Hindu-Muslim Conflict (Voice of India, 1990).

It was also the first book on the dispute based on first-hand sources written by an unbiased Western scholar. Koenraad rebutted the false claims of the Marxist historians, then actively campaigning for the Muslim side, or put better, against the Hindu side. The book was released by none other than L K Advani and Girilal Jain, then the most important figures in politics and media respectively. Advani at the time was the Hindutva hero, after his recently concluded famous Rath Yatra that put the Ram mandir in Ayodhya on the national agenda.

However, as it became clear later painfully, Koenraad had inadvertently put his career and by implication his life on line to defend the Hindu position on Ayodhya and other related issues. Hindu leaders and organizations happily used his hard research, data, facts and arguments he marshaled. But hardly thanked him and, more importantly, never provided some succor to compensate the hardship he invited upon himself by just becoming the friends of Hindus.

The situation has not changed since. Although today Koenraad is an internationally recognized Indologist, well known to all organized anti-Hindu forces. He is even feared by many left-liberals. No Indian left-liberal or Islamic apologist is ready to face him in any standard debate on Ayodhya or on issues related with the theory and practice of secularism in India. For the same reason he has also been denied academic situations in the Western world, mostly controlled by left-liberals. The unstated reason everywhere is the same: he is a supporter of ‘Hindutva forces’, by itself deemed as a bad entity.

Yet, the very Hindutva forces never invested even in his well-being, let alone thanking and celebrating his scholarship. A first rate scholarship that put leftwing superciliousness in place. Hardly any Indian left-winger or secularist ever took up Koenraad’s works to find faults, though they all know its weight. Initially they tried even to deny his existence, saying that Koenraad Elst is a fictitious name created by cunning Hindutvawadis to give their ‘lies’ a Western support! An uber secularist Khushwant Singh also fell for this propaganda, until he by chance met Koenraad in real flesh. This kind of denial attempt by the left-liberal powerhouses in India was also a revelation of their puerile scholarship. By the same token, it was also a left-hand recognition of Koenraad’s prowess.

That is why it is so strange even by common sense, not to say political-intellectual sense, that Hindutva quarters did not see the need to make his stature influential or at least more visible. Koenraad is personally known to many tall Hindutva leaders, who are directly in power for decades. But it never occurred to anyone to set even a little ground beneath his feet, so that he could continue work comfortably. The work which benefitted the Hindutva leadersthemselves. His scholarly contribution on the Ayodhya controversy is just a case in point.

The VHP and BJP were campaigning for Hindu claim over the disputed Ramjanmabhumi-Babri Masjid site for years. Yet they did not collected hard evidences to be used in court for their claim. The campaign was largely emotional, based on traditional lore. It was important but where a court was hearing the matter and the issue was debated in media and academia, such an approach was hardly winnable. It was Koenraad, encouraged and helped by Sita Ram Goel, who took upon himself to present a systematic case for Hindus with authentic historical and logical evidences. This was his second book Ayodhya and After: Issues before Hindu Society (Voice of India 1991), a first introduction to all aspects of India’s religious conflicts.

Thus, Koenraad Elst was one of the rare individual scholars who put paid to the pretentions of eminent Marxist historians. Soon they started dragging feet because they depended on the mere emotionalism of the Hindu forces, and were sure to win the thinking classes by flaunting their high academic chairs. Koenraad, Sita Ram Goel and also some others such as Arun Shourie, Swapan Dasgupta etc. challenged them on facts, arguments and historical method. Thence the Marxists changed their tune, fled the court contest and finally also the arbitration the Prime Minister Chandra Shekhar had constituted to resolve the issue on evidence.

It would be ungrateful if we do not recognize the role Koenraad also played, indirectly, in Hindus winning the Ayodhya court case. The archeological evidence, after the Allahabad High Court ordered the Archeological Survey of India to dig into the site, further corroborated the contentions of Koenraad and Sita Ram Goel presented in their books about temple destructions.

This long prelude is necessary to explain the importance of his new book, Hindu Dharma and Cultural Wars (Rupa, 2019). It may be useful to evaluate the book, as it helps to understand the continuity of his concerns and consistency ever since he voluntarily took up the case of Hindus vis-à-vis their opponents in politics and academia.

The articles in this book are on diverse issues, all combined make the outline of a cultural war presently raging which Hindus are compelled to fight. Yet they are ever so reluctant to fight, as the articles about the BJP and their governments in this volume also indicate. Many Hindus, including their leaders, are not ready yet to even acknowledge that there is such a war going on. Even as they are feeling the heat of the war for a long time. This strange apathy is also addressed in some articles in the collection.

Some new insightful pieces in this collection of 25 articles are: Hindu Fearlessness through the Ages (pp. 1-6), A Diversity of ‘White saviours’ (178-194), Debating the Hindu Right (43-46), The Modi Government as an Exponent of BJP Secularism (39-42), Hindus Need Dharmic Awakening? Rather, the BJP needs Dharmic Awakening (72-74), Academic Bullies (152-167) , and The RSS in Western Media (127-133). For a new reader every article would be a novelty and provide food for thought. They all combined make the title meaningful, suggesting that the Hindus are in the midst of a cultural war. Even though many highly educated Hindus are blissfully unaware of it.

That makes this book rather more valuable. The author himself said it is a ‘very good book’. Should Hindu organizations study and propagate it seriously, a great need of the time may be fulfilled. The need of making uninformed Hindus aware of the dangers they are facing. The Modi govt in power has not thwarted it. At best the dangers seem subsided or waiting at a distance, but they are very much alive and focused.

Take, for example, any issue discussed in the book. Yoga, Ramakrishna, Saint Thomas, Golwalkar, Aurangjeb, Macaulay, Hinduphobia, nationalism, or even Ayodhya. The daily discussions, observations and comments about it in our prestigious media are found invariably opposite to the hard realities, past or present. It tend to take, as a rule, an anti-Hindu and pro-Islamic or pro-Church stance. Sometimes even knowingly so. What this shows, if not that many leading Hindu intellectuals are fighting from the enemy side? They even take pride in being ‘liberal’ and more ‘fair’ to others. Totally oblivious of the dire results of such naïve Gandhian stance in recent past, as in Bengal and Punjab during the years 1947-48 or in Kashmir since 1989 onwards for more than a decade. Not to speak of the great devastation the Hindu society earlier suffered during centuries of barbaric Islamic onslaught.

Being increasingly ignorant of the un-natural calamities fell upon Hindus, past or present, is the hallmark of Indian academic discourse in independent India. By extension of our media too. As a result, they simply deny there is any cultural war going on. If at all, they say it is the ‘minorities’ who are at receiving ends. Any single day a prestigious Indian English newspaper would reveal a score of evidence in its coverage, headlines, comments, op-ed articles, and even in selection of pictures or data or words. Not only they summarily speak a different tune, from the concerns expressed in this book of Koenraad, but also definitely ridicule it in more or less open manner.

Therefore, the problems the Hindu society is facing on cultural fronts are as acute as ever. In fact, the BJP securely in power has somewhat lulled many in the Hindu movement. All the while the enemies of Hindus are relentlessly playing the victim card, and getting rewards, even more easily. Any event of significance, be it the legislation for banning triple talaq, or the hearing on Ayodhya in the Supreme Court, or abrogation of Article 370, or meeting of the RSS Chief with an Islamic leader, or even just BJP winning an election is used as a common indicator of the ‘hurt’ non-Hindus are feeling regularly. This refrain is articulated and propagated more regularly and forcefully by Hindu liberals than a Muslim or Christian writer. In no case, such as mentioned above, a left-liberal Hindu would even care to give a voice to a single Hindu hurt, as if such a hurt is non-existent or irrelevant.

This makes the Koenraad book much more noteworthy. It brings to light some still hidden truths about the history of the Hindu society. It also challenges many wrong notions entrenched in its intellectual classes. At present is a golden opportunity because influential Hindu organizations in India could use such works to awaken sleeping sections of our country, reeducate the misinformed sections and correct the wrong notions wantonly propagated by misinformed or misguided intellectuals. Not only the Hindus but at least a section of Muslims also mouth falsehoods due to plain ignorance.

If candid rebuttals and correct information could be disseminated with equal seriousness and regularity, the tide of the cultural war can be turned successfully. That is the opportunity at hand. Are the so-called organized Hindutva forces up to it? It remains to be seen. Meanwhile individual Hindu warriors may rejoice that one of their inspirations – a maharathi – is still fighting the battle, despite being without a rath. This seems an apt imagery to depict Koenraad Elst, the Belgian scholar and orientalist. Through his scholarly contributions he has been fighting for Hindus with his two bare hands – without weapons customarily available to those on high academic chairs. Grateful Hindus must salute the rare warrior on completing his 60 years recently!

Father of the Nation is too Big a Crown for Him