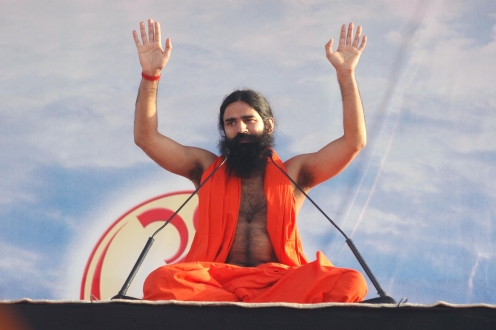 Baba Ramdev, India’s prominent Yoga guru and campaigner against corruption, was unexpectedly detained when he arrived at London’s Heathrow airport on Friday, the 20th September. He had visited the UK regularly in recent years and was the guest of honour at the celebrations for Swami Vivekananda’s 150th birth anniversary. The young Asian woman immigration officer informed him he would have to wait. When he enquired after a half hour why he was being held up, she curtly told him to remain in the detention centre, failing to recognise her famed guest. His hosts waiting outside were growing anxious and Baba Ramdev phoned to inform them he was not being allowed to enter the country. After three hours he exercised the right, he was told he had, to demand the reason. None was forthcoming.

Persistent representations from his hosts failed to elicit any explanation from the immigration authorities. Legal representatives who arrived to offer counsel and inquire had no luck either. The Indian High Commission in London was contacted, but claimed it could not fathom why Baba Ramdev was being denied entry. It cannot be said they evinced undue interest over the issue, perhaps conscious of the Congress party’s abhorrence for Baba Ramdev and all his works. Eventually, after being detained for eight hours, Baba Ramdev was granted temporary entry to the UK, but required to return for a further interview the following day. His passport, the leaflets he was carrying and his personal diary were seized while Hindi and Sanskrit translators were sought to scrutinize them. The timing of the immigration interview he was required to attend coincided exactly with the commencement of the Vivekananda birth anniversary celebrations. It was evident they did not wish him to participate.

One of Baba’s devotees telephoned the Rt. Honourable Keith Vaz, MP for Leicester and Chair of the Home Affairs Parliamentary Select Committee, a position of authority pertaining to official police and immigration policy. He swung into action immediately, inviting Baba Ramdev to his home to discuss the situation. It is unprecedented to be invited to the home of a MP to confer about an issue raised by a member of the public. Keith Vaz, whose wife happens to be a leading expert on immigration issues, spent several hours on the phone to the authorities involved at Heathrow, the Home Secretary as well as 10 Downing, Street, the prime minister’s official residence. He berated the immigration authorities roundly and then unexpectedly accompanied Baba Ramdev to Heathrow airport. The immigration authorities suddenly became receptive and acceded to Keith Vaz’s demand that Baba Ramdev’s passport and the seized documents be restored to him immediately. All this only took five minutes and he was granted a two-year multiple entry visa on by the immigration authorities on their own initiative. Keith Vaz earned the profound gratitude of Baba Ramdev’s followers and British Hindus for his huge efforts and extraordinary courtesy towards their revered saint.

It transpired that a coded notation, visible to scanners used in airports, had been imprinted in Baba Ramdev’s passport by the authorities at New Delhi immigration control, as he was departing for the UK. Such a notation is reserved for terror suspects and drugs warlords and prompted an instant red alert when Baba Ramdev arrived at Heathrow. It would seem that the highest political authorities in New Delhi sought to disrupt Baba Ramdev’s travel abroad, to the UK and US, where he was participating in various events connected to Swami Vivekananda’s 150th birth anniversary. It can only be inferred that they have become so fearful of his campaign against corruption and support for political change in India that they were prepared to sink to the lowest depth imaginable. No doubt Baba Ramdev’s support for Narendra Modi’s prime ministerial candidature compounded their rage, prompting disregard for all legal and moral norms. They were prepared to instigate the humiliation and possible arrest of a Hindu saint to perpetuate their corrupt hold on power and persist in their increasing disregard for the Indian Constitution. The prime minister himself and his patron, who has usurped political and constitutional authority in India, must both be personally held to account for this outrage against Hindus.

In the event, Vivekananda 150th birth anniversary celebrations in London’s Hounslow Borough were a huge success. The audience was amply rewarded for their patience, having waited many hours for Baba Ramdev’s presence. He delivered a pithy and thoughtful speech when he arrived at the closing minutes of the first day’s session. The Rt. Honourable Shri Venkiah Naidu also spoke at length about India and its future in the context of Swami Vivekananda’s aspirations for Hindu civilisation. On the following day, many speakers, from doctors to educationists and women’s rights activists, delivered inspiring talks about the future for India they volunteered to help promote. Baba Ramdev spoke at length about the parlous situation in India, suggesting some extraordinarily useful economic solutions that any out-of-the-box policy maker should take seriously. He counselled more modest aspirations for material advancement in India since European and American standards of living would be unrealistic for Indians to expect. Interestingly, he criticised the waste of resources, citing the huge land holdings of the Indian railways that could be used for economic development. Such imaginative ideas for a yoga guru were a surprise! He ended by giving a ringing endorsement of Shri Narendra Modi, much to the universal delight of the audience!

It only remains to reiterate the sense of outrage that pervaded the event in London at the treatment meted out to Baba Ramdev at the instigation of the Indian government and its supreme authorities. It seems that they will stop at nothing to retain political power. However, their egregious misconduct against opponents suggests anxiety that they are poised for consignment to the political wilderness indefinitely since comprehensive demolition of the Congress party appears to be in prospect. They and their countless venal retainers, not least in the media, have every cause to feel anxious that the good life, through prodigious illegalities, is destined to come to an unhappy end, with some facing prosecution for legion violations of the law. The Congress party itself has been seized by foreign interests, seeking to cause massive harm to India. One by one, national institutions are being compromised, first parliament through outright purchase of votes, followed by the courts and then India’s intelligence services. These traitors are now engaged in subverting India’s armed forces to gain temporary electoral advantage, by revealing the innermost secrets of the Indian State. One may legitimately infer that when the anointed her apparent identified Hindus as the principal terror threat in India, against all the evidence, he was speaking in deadly earnest to his possible patrons. This is why Hindus are being routinely fitted up for terror crimes known to be committed by Pakistani agencies. The assault against Baba Ramdev is only the latest in their many calumnies.

(Dr. Gautam Sen taught international political economy at the London School of Economics and Political Science for more than twenty years. He is currently President of the World Association of Hindu Academicians and Member of the Steering Committee of the World Hindu Economic Forum)