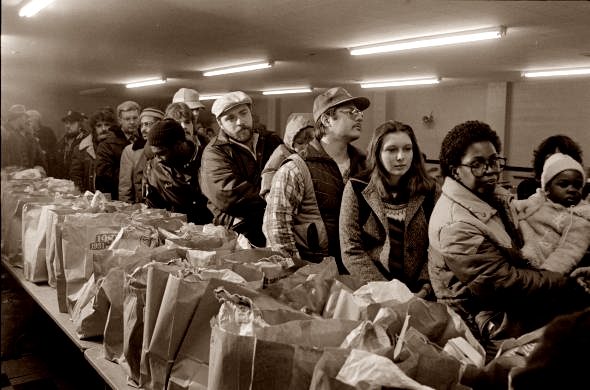 Americans live in the world’s wealthiest nation yet close to 50 million struggle to put food on the table. Compounding this is Washington’s apathy towards the condition of middle and lower income Americans devastated by poverty.

Lucy Reyna is a veteran of the Iraq war. A mother of three young children, she returned home from her second tour in 2007. She was diagnosed with panic disorder and generalised anxiety disorder because of what she experienced in combat. Then she was told she had both cervical and breast cancer.

Unable to work, Lucy relied on food stamps to feed her family. She also frequented a food bank that supplied her family with groceries and baked goods that store owners were about to throw out. “I was constantly looking up different resources, trying to dig myself out of this hole,” she says. “The hardest part was not knowing when it would get better,” she says. “I had such a bleak outlook and was always stressed trying to make ends meet. It felt hopeless.”

According to a 2014 survey by Feeding America – which feeds 46 million hungry Americans – about 25 per cent of military households require food assistance because military salaries are often too low to cover the cost of daily life.

Loudoun County in Virginia is made up of one of the wealthiest communities in the US. But it’s also where Barbara Diaz, a nanny, struggles to feed her family of eight. While the median income in the county stands at $122,000 a year, Diaz, 55, makes about $21,600 a year as a nanny. With her salary, she has to feed her family and pay rent, car insurance and utilities. Often, she doesn’t have enough at the end of the month for food, so she turns regularly to her local food pantry for help. She’s one medical emergency away from destitution.

Robert, a Vietnam veteran in his 60s, is a descendant of a long line of American servicemen. Five years ago, he lost his home in Florida and moved to Connecticut, where he now lives out of a van. Often, the only hot meal he has is at the community soup kitchen. Robert’s hardest days are Wednesday and Sunday when the charity doesn’t operate; then he has nothing to eat.

Five years after the death of her husband, Rosalinde Block found herself at a New York food pantry, in desperate need of food to feed herself and her teenage son. She is no ordinary American. According to ABC News, the 61-year-old graduated from an elite American college and made her life as a musician, illustrator, author and teacher of music and art.

Roy is a casualty of the New England fishing industry that went bust in 2007. With nothing in the way of savings, the then 39-year-old found himself homeless for the first time in his life. Hunger has forced the once proud Maryland resident to visit local charities.

[pullquote]Close to 50 million Americans do not know where their next meal will come from.[/pullquote]

America may or may not be the land of the free, but it is certainly the land of the hungry. Job losses, home foreclosures and other recent crises have been life-altering for Americans, with close to 50 million Americans who do not know where their next meal will come from. That’s one in six Americans struggling with hunger.

This is the official figure from December 2010 and experts say the current figure could be higher. “The numbers are provided by the US Department of Agriculture,” Ross Fraser of Feeding America, the nation’s leading domestic hunger-relief charity, told this writer via email.

Doctors at American clinics say they have seen a dramatic increase in the number of children they treat who are dangerously thin; that’s not surprising considering hunger is an everyday reality for 16 million American children.

What is worrying the American elites is the demographic that is seeking help. Most of the newcomers that show up at Feeding America’s centers are from middle class backgrounds and had until now managed without handouts.

All across the country, from LA to New York, it seems the soup kitchen lines are getting longer. And requests are so high, food centres nationwide are turning away the hungry. “We will soon have the most food stamps recipients in the history of our country,” says Jim Weill, president of the Food Research and Action Center.

Indeed, right now many are fighting for their lives. A USDA report says more than a third of these households “had very low food security — meaning that the food intake of one or more adults was reduced and their eating patterns were disrupted at times during the year because the household lacked money and other resources for food”.

So why does a country that spends more on its military than the next 11 nations combined have so many people in such dire straits? How can so many be hungry in a country that has bought 185 F-22 stealth fighters at $361 million each?

The chief reason is that America – like Britain – is among the most unequal societies in the world; it is a country where the wealthy have a huge disconnect with ordinary folk. It is disturbing to many but American leaders do not see the irony in doling out $700 billion to bail out New York’s rogue bankers while 40 per cent of New Yorkers have problems affording food.

Unemployment is growing even as new jobs are not being created. Washington cites an unemployment rate of 9 per cent, but according to the financial website Zero Hedge, if you include the number of Americans who have stopped looking for work or who are unemployable, then the real figure is 17 per cent or 51 million out of work.

According to a USDA official, hunger is very much a hidden problem. “When you walk by people who may be hungry, it’s not necessarily evident they’re hungry. This is something that low-income people don’t talk about a great deal.”

[pullquote]American leaders do not see the irony in doling out $700 billion to bail out New York’s rogue bankers while 40 per cent of New Yorkers have problems affording food.[/pullquote]

Worse, those who can help are looking the other way. What most people would describe as hunger, the USDA couches it in the euphemism “food insecure”. And deaths caused by malnutrition are passed off by hospitals and coroners as  “natural causes” or “failure of bodily organs”.

During the Great Depression of the 1920s, millions lost their homes and ended up in the streets. Today, foreclosures are again forcing people out of their homes. The greater danger for poor – and a growing number of middle class – Americans in the 21st century is they are not just competing with each other for food and resources. In the backdrop of declining incomes and rising unemployment in the US, keeping in step with more than two and half billion Chinese and Indian consumers in the global marketplace is going to be a tall order.