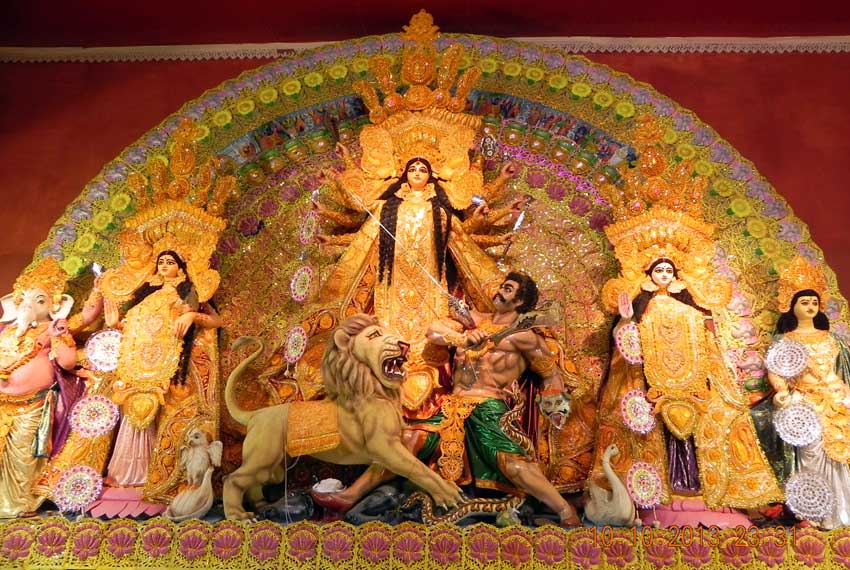 Open letters are currently in vogue, so I thought of writing one myself and since they are usually written to those who wield some kind of power, I chose you, the Infinite Power Herself.

Sticking to the time-tested tradition established by professional open-letter writers from our media houses, this one will mostly talk about you or ask questions of you, all the while avoiding mention of me, except when expedient.

I am not very sure why they named you at all, given that you are beyond name and form but be that as it may, I have often wondered about why they chose to call you Durga, in particular. I know that the kings of yore worshipped you and prayed for your assistance in battle, calling on you to protect their Durg (fort).

Maybe, gradually they began to associate you with their forts and the name stuck? Or like your devotees claim, you are the destroyer of their misfortune or Durgati and therefore, aptly named such.

Both these conjectures, though heart-warming, sound overly conceited and optimistic to me. My favourite theory is one that derives your name from Dur (difficult) +Gam (to attain). This name not only fits the case for the origin of the Sanskrit word for fort but is also corroborated by the experience of those who strive to know you, only to end up describing you as unfathomable, unknowable and invincible.

Speaking of names, Durga is not the only name you are known by. You are often named after your worshippers or those who claim you as their own.

The Pulindas, Shabaras and Barabaras of Central India call you Vindhyavasini (whose abode is the Vindhyas). The Chandas and Mundas of Central and Eastern India together call you Chamunda.

You’re also known as Katyayani and Kaushiki, after the adoration you receive from the Katya and Kaushika lineage of Rishis. Likewise, you’re also known as Parvati (of the mountain), Bhavani (pervading the Universe) and Himavati (daughter of the Himalayas), varying according to place and context of usage.

It is slightly perplexingto my mind that you’re called both Gauri (fair complexioned) and Shyama (dark complexioned), but then who would dare limit your attributes to match the sorry consistencies of our waking consciousness?

Every year during Durga Puja, we recall with celebration, your epic battle with Mahishasura, the most powerful asura ever, who, you defeated when just about everyone else had surrendered to his violent imperialism.

But Mahishasura never really had a chance. Some say that this battle is ordained to be fought in each one of us, as we patiently wait for you to put an end to the reign of the petty tyrant that we recognize as our ego.

Seated on the tamed tiger of unruly vital passions, the different articles you hold in your ten hands signify the various aspects of universal Power,largely inaccessible to our feeble, earthly existence and whose iconography,is rationalized and reinterpreted in every era according to the direction in which the wind of ideas is blowing.The truth though is that you remain the same,the unchanging and eternally dynamic facet of the ground of all being that is known as Brahman.

You are also remembered as the fierce yogini, Uma and I tremble, recollecting how you had set yourself ablaze by the power of your tapas, in indignation over the insults heaped by your father, King Daksha on Shiva, your beloved consort.

Shiva, on hearing about the unfortunate turn of events, went into a wild frenzy, intending to annihilate the cosmos by his deadly tandava, while carrying your lifeless body in his arms. It was then that Vishnu, taking pity on all sentient beings, decided to intervene and using his Sudarshana Chakra, shredded your corpse into 108 pieces that landed at different places on the earth. With the corpse gone, Shiva’s anger subsided and the Universe was spared an untimely and violent annihilation.

The places where these parts of your body landed are spread all across the Indian subcontinent, including but not limited to, present day Kashmir, Assam, Karnataka, Gujarat as well as Nepal, Sri Lanka and the now hostile, Pakistan, adding up to a total of 51 Shaktipeethas and 18 Maha Shaktipeethas.

From times immemorial, millions of Sanyasis, Grihasthas and Yogis, both men and women,of all shades and sects, have made laborious journeys to these spots, seeking the grace of a particular facet of your divine being.

The ever-shifting internal political boundaries were inconsequential to the pilgrims’ ardour, which inspired our sages, like Vivekananda and Aurobindo, to address you directly as Bharata Mata (Mother India), reminding us that your being pervades every square inch of this sacred geography.

Vande Mataram, the inspiring mantra for the struggle against colonial rule for Swarajya, written by Bankim Chandra Chatopadhyay, addresses Bharat Mata thus: “Thou art Durga, Lady and Queen, With her hands that strike and her swords of sheen.”

For,you have given the people of Bharata a sense of territorial,cultural and spiritual sovereignty that far surpasses the tumultuous transience of any form of political unity.

We have seen the grand empires of Persia, Egypt, Macedonia and Arabia bite the dust, to be buried in the annals of archaeological scholarship while we have resiliently survived brutal and barbaric onslaughts lasting a thousand years.

Yet, we witnessed in disbelief, the horrific act of partition, as a consequence of which, perhaps for the first time in 10000 years, there were regions within the Bharatavarsha that were declared out of bounds for its own people, ironically at a time when new means of transportation were revolutionizing travel.

Also, for the first time, we were taught that there were boundaries to be acknowledged, even in a mother’s love for her children.The politically suicidal surrender of a vital principle to alien hostile forces is a setback that waits to be reversed at some point.

If survival is the criterion for legitimacy of a way of life, if peaceful coexistence with the ‘other’ is a hallmark of wisdom and if aligning your civilizational vision with the greater good of the planet is an evolutionary imperative, Bharata has set a towering benchmark for every other civilization to measure itself against.

Thanks to your imminence, Mother, we need no patronizing lectures on the moral issues that trouble the world.We have set a sterling example in dealing with such issues, with amazingly few lapses that are routinely permitted for all humanity anyway.

In fact, we are a natural leader for any global coalition on matters concerning the biosphere’s continued existence on the planet because your gift of buddhi is something we have nurtured over millennia and even psychologically isolated from other forms of intelligence in the wide spectrum of mental activity.

In other news, we successfully launched the Mangalyaan too, with much fanfare.

Our faculties of buddhi(reasoned discernment) and viveka(moral differentiation) tell us that as a consequence of our current biotechnological condition, humankind is bound by necessity, of being organized into concentric circles of decreasing loyalty.

The apparent goal of all socio-economic endeavour is to push the boundaries of the smallest of these loyalty-based circles to as far as possible in relation to the individual at the centre. As long as we are organized along these principles, there will always be place for Nationalism, Tribalism or whatever –ism applies to a culture’s specific coordinates in World History.

We cannot shy away from this reality and therefore, we ask for strength, dear Mother, to stand by our civilization’s identity, no matter how difficult it is to do so, confronted as we are with the cognitive dissonance faced by other cultures and even our own peoples, whose sense of our collective history is embarrassingly ill-informed, cutting across the ideological and demographic divides.

We are indeed grateful that you have implanted in us, Ahimsa (non-harming), which is usually misunderstood as a stoic, and passive intellectual response to violence, while our ideal is one that affords sthirata (calm) to a soldier making a war cry in the battlefield, shanti (peace) to a mighty monarch who rules to serve and protect his populace, achanchalata (quietude) to a merchant mundanely going about selling his goods and nishchala-niravata (stillness of silence) to a reclusive sage, contemplating on your glory.

For we watch you betray a serene smile, even as you pierce Mahishasura’s torso with your trident,playfully reminding us that all existence is just a careless part of your cosmic leela.