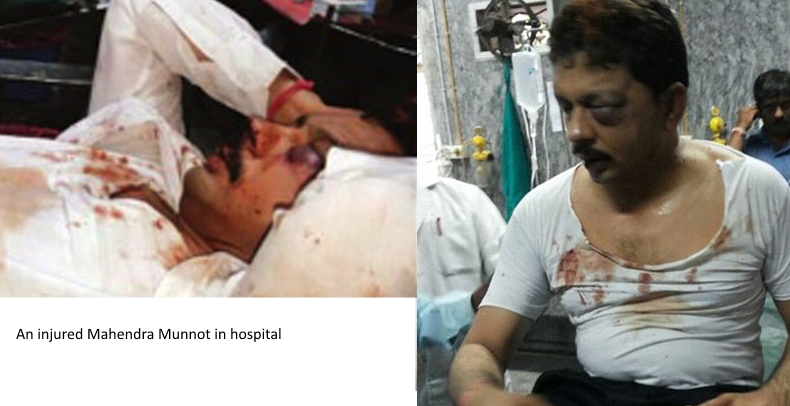 This happened in Bangalore.

Mahendra Munnot is the owner of Maruti Medicals in Vijayanagar, Bangalore. That however is not his claim to fame. Munnot over the years has been working with dedication for the cause of cow protection and protesting against cow slaughter. He regularly organizes public awareness campaigns and programmes about the importance of protecting cows, and has even written a book on the subject.

The following is the eyewitness testimony of a member of Mahendra’s team who spoke to IndiaFacts.

For over a week, Mahendra and his team noticed rampant and regular incidents of cow smuggling in the Gangondanahalli locality. They clicked pictures, collected evidence and pressed the police to take action. Initially, the police refused to even take a complaint but finally relented. However, there was no follow up action despite the complaint. When questioned, the police admitted that “there is only so much we can do.”

Yesterday–1 October–Mahendra went to MMI School (a private school) for distributing his book on cows. He was accompanied by his driver, Upendra, Rakesh, and another person. After he finished distributing the books and was sitting in his car getting ready to leave, a mob of about 50 Muslims surrounded the car and unleashed a vicious attack.

Armed with deadly assault weapons and stones, the mob smashed Mahendra’s car and injured the inmates grievously. Mahendra and Upendra have suffered severe injuries on the face, arms, legs, and other body parts. Even as they tried to get out of the car to save themselves, one of the Muslim goons pinned Upendra down on the ground and threw a huge stone on his chest.

Eventually, the teachers and other school staff intervened and locked the victims up safely inside one of the rooms in the school. The mob chased them down there and pelted stones at the door and windows, breaking them. By then, the Chandra Layout police station had been alerted but it was too late when they arrived on the spot. The Muslim mob had fled the scene.

Mahendra and others were taken to Victoria Hospital for immediate treatment and were later shifted to Columbia Asia for a more detailed treatment.

Following this ghastly incident, Mahendra’s supporters blocked the road demanding the arrest of the culprits. Speaking to IndiaFacts, one activist said that the police instead of going after the culprits, detained several members of Mahendra’s team till late in the evening yesterday. He said, “what kind of Government is this? What kind of country is this where our law enforcement people don’t care to rescue Bharata’s its most sacred animal? The police claim that they have arrested 12 culprits, another one says that we have arrested 5 culprits.”

Yet another activist told IndiaFacts that Press Secretary to Karnataka Chief Minister Siddaramaiah, Mr. Dinesh Amin Mattu had given orders to prohibit the media from covering this incident. As a result, no TV crew was allowed in the locality.

More importantly, this beastly incident instead of getting wide coverage in the mainstream media, was largely given a go by. Here for example is how the Times of India reported it.