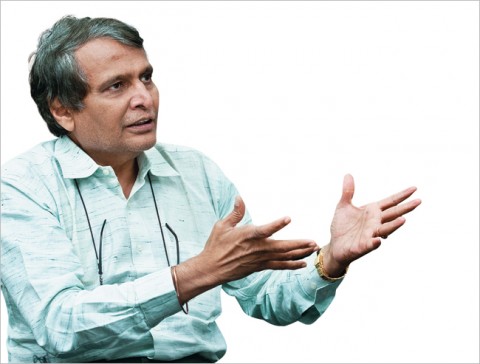 One of the key appointments made by the Narendra Modi-led NDA Government has been that of former Power Minister, Suresh Prabhu, who now heads the advisory panel on the integrated power, coal, and renewable energy sector. In his earlier stints, he has handled six diverse portfolios at various points in his career. He has been described in the past by Asiaweek  as a “talented nation builder” and a promising “future leader.”

The following is the transcript of a telephonic interview IndiaFacts had with him.

At the outset, thanks for agreeing to do this interview with IndiaFacts Mr. SureshPrabhu. Without much ado, let’s begin.

You’ve held a distinguished career as both a Chartered Accountant and a Cabinet Minister and Parliamentarian. Asiaweek had described you as a “nation builder” and a future leader. Any thoughts you’d like to share when you reflect back on this career?

Suresh Prabhu (SP): In my mind, I would like to think of a leader as someone who’s a leader of an idea rather than an individual. A person who has the vision and the will for implementing transformational ideas is a good leader.

As for my career I was the youngest chairman of the largest co-operative bank in India. All of us criticize politics as bad…people instead of helping a fallen person usually wait for others to help. Similarly, nobody wants to take the plunge in politics, and so I decided to take the plunge and do my bid. Actually I think I was lucky…I didn’t go through the usual route…like, I was never in municipal or state politics but I became an MP directly.

People ask me “What change have you brought in?” my answer – the only change I brought was to do more and more work but what I did not change was myself. I am still the same person.

You’ve also handled diverse portfolios like Energy, Industry, environment, chemicals. In NDA-2, you were praised for your transformational work in the power sector. And now you are the head of a high-powered panel again in the power sector. So what drives you to seek such diverse areas of activity?

SP: Diversity is innate in human nature because nature itself is diverse. Our own mind is extremely diverse. It moves from one extreme to another- within a fraction of a second it will move from India to Antarctica.

What is important is how you achieve positive results in spite of this underlying diversity. How do you focus on action?

I could change the entire electricity sector during the previous NDA government through new laws etc. I am proud to say that in the power sector the Electricity Act 2003 heralded a comprehensive reform…it was well thought out, well planned and well implemented. This largely happened by investing Rs.40000 crores towards reforms in distribution.

We have to make power commercially viable. Unless distribution is reformed, we cannot not achieve this viability. All the money we pump in is lost if we can’t collect the receivables. Today, we are losing about 70-80 thousand crores of tax-payer’s money annually only because of this.

We need to ensure that to transform the sector totally, two things need to be done. First, the private sector must come in and second, losses need to be minimized in the public sector.

Governance is as complex as the human body, but we seem to be focusing only on the heart but not the other vital organs like liver, kidney, pancreas etc…My approach therefore, is to focus on the entire body.

I could understand the intricate linkages and cascading effect which my decisions in one sector have on other sectors. It is a must to understand these linkages. For example, China’s development has come at the cost of destroying its water bodies and causing massive damage to its environment. Chinese cities are one of the most polluted in the world.

I think my experience in the diverse areas I have worked in has helped me in this manner…that is, to understand these linkages, which will also help craft well-rounded policies.

Could you share your vision with respect to power, water…or any other areas that you wish to focus on in terms of economic development?

SP: Governance in India has been fragmented and has become unwieldy. Lots of unnecessary/extra ministries, committees, groups, etc dealing with the same thing have been created.

The Central Government should create synergy. We should have an integrated energy policy plus an integrated water policy for India.

The present government has already done well by bringing power, coal and renewable energy together. It is a welcome development. Oil and gas could also be integrated.

I think fixing the water and energy sectors should be made a priority.

India’s success story in the recent decades has been by allowing the private sector to grow. For example, but for the IT industry, our current account deficit would be higher by $75 billion.

Next is agriculture. Unlike China, agriculture has always been in private hands in India. This is a phenomenal achievement anywhere in the world. Unfortunately, the governments till now have thought that they know the best on how to decide people’s destiny…the government should get out of deciding people’s destiny and simply work as the guardian of the state.

The farmer should be free to sell his produce anywhere in India….. remove unnecessary restrictions on the movement of his produce. A farmer in Kerala should be able to sell coconuts in Jammu and Kashmir for Rs.100—or wherever he gets the best price—instead of being forced to sell it at Rs.10 to the local distribution chain or market.

When this happens, India will no longer be growing in Udyog Bhavan but in the fields of these farmers.

The government should also encourage small and medium business sector which is the actual backbone of our economy.

A strong water policy will improve the Human Development Index. Much of the health problems in India…public sanitation problems etc…are the result of having a bad water policy. We need to fix water policy urgently…And to improve the economy, fix energy policy.

There’s been lots of media reports and articles analyzing and reporting on how the style of government functioning has drastically changed under PM Narendra Modi. Your take on that?

SP: Prime Minister Narendra Modi is a completely different trendsetter. He represents people’s aspirations. He is the first PM who has willingly taken the responsibility of being a change agent himself.

But then, already people are saying ‘Where is the change? We can’t see anything happening.’ Mr. Modi works for 16-18 hrs every day. He is not a magician, and people can’t expect miracles overnight. I’m sure in a couple of years, a different India, a different sort of governance and a different set of expectations will come about. In fact, the way people will set their expectations will itself change, and it will be a positive change.

Mr. Narendra Modi has given targets to every ministry and departments under his Prime Ministership. When a wife cooks for the family…if the family members keep asking ‘How’s the food, how’s the food?’ every five minutes, she would reply ‘Wait till the cooking is done.’ Narendra Modi has promised delivery on all his poll promises, but not instant results. He has repeatedly asked the people of India to give him five years. I am sure we will see a totally different India, a positive and vibrant India after five years.

You held important Cabinet portfolios in the earlier BJP-led governments. How different or similar is the current experience compared to the past?

SP: Atal Bihari Vajpayee ji and Mr.Narendra Modi share a common trait:nation building is more important than merely running the government. Narendra Modi thinks that power is a means to achieve this goal of nation-building.

There are different styles of working. Atalji told me ‘Don’t worry if a particular policy or decision of yours won’t benefit us electorally. Focus on how it benefits India.’ Narendra Modi is also the same. Mr. Narendra Modi thinks long-term. In the short term, surgery might be necessary and painful but is definitely essential for the cure.

Each time the BJP comes to power, we keep hearing concerns in the media and other public spaces about saffronization of textbooks, UCC, curbing freedom, etc. How would you respond to that? Is there any truth in those concerns?

SP: Large sections of India feel that they are citizens of India and must be treated equally. It is equally true there are historical realities which cannot be ignored. These must be taken into consideration and policies must be made after calm and reasoned debate and deliberation. Only this will help to reduce friction in the society.

The Congress talks about minorities but their own Sachar report shows the opposite. Rather than shaping policies using only numerical strength as a factor, an approach of nation building helps looking at things qualitatively.

Mr. Narendra Modi thinks that India is one, all Indian citizens are equal before law, and he’s working for the nation and its people as a whole instead of this or that group.

In an earlier interview, you said that India needs to create infrastructure to the extent of $10 trillion dollars in the next three decades. Would you please elaborate on this?

China put 12% of its GDP in infrastructure. As a result China’s GDP has grown sixty times in 36 years. This has perhaps never happened in history before.

So, 10% of GDP adds up to about five trillion dollars in the next fifteen years. Think what it means in the context of removing poverty.

Lastly, what is your take on the recent BRICS summit in which India secured a victory by becoming head of the new BRICS bank that will soon be launched? What were the other key takeaways and pointers to India’s role in BRICS in the coming years?

SP: BRICS was a huge success. We have always talked anti-imperialism etc, only on paper. The only way to arrest imperialism of any sort is by creating an economic power that will result in a truly multipolar world.

BRICS…well, largely all member countries except the former USSR were victims of imperialism rather than perpetrators.

We talk about democracy at home, but on the global stage, there is no real democracy. The USA invaded Iraq without the UN Security Council’s approval. The same is happening on the economic front with the IMF and the World Bank. So, on the whole I think India heading the new BRICS Bank under Narendra Modi’s leadership is both a welcome sign and a positive development.