Ashoka And Pushyamitra Sunga: A Study In Mythmaking 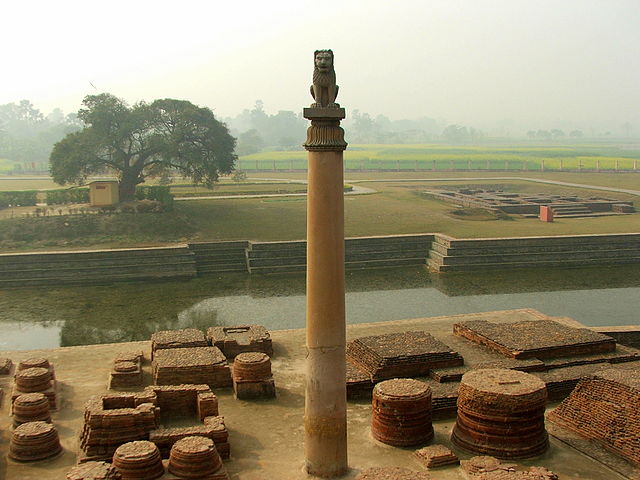 Let us elaborate one example of pro-Buddhist bias in modern indologist scholarship. It has to do with a story of alleged Hindu persecution of Buddhism by Pushyamitra, a general in the service of the declining Maurya dynasty, who founded the Shunga dynasty after a coup d’état. This story serves as the standard secularist refutation of the “myth” that Hinduism has always been tolerant.

Another myth has been meticulously promoted with regard to the tolerance of the Hindu rulers. Let us go back to the end of second century BC. Divyavadana, in a text of about the second-third century AD, depicts Pushyamitra Shunga as a great persecutor of Buddhists. In a crusading march with a huge army he destroyed stupas, burnt monasteries and killed monks. This stretched up to Shakala, i.e. modern Sialkot, where he announced a reward of 100 gold coins to the person who would bring the head of a Buddhist monk. Even if this is an exaggeration, the acute hostility and tensions between Pushyamitra and the monks cannot be denied… (Gargi Chakravartty: “BJP-RSS and Distortion of History”, in Pratul Lahiri, ed.: Selected Writings on Communalism, People’s Publishing House, Delhi 1994, p.166-167)

We need not comment on Chakravartty’s misreading of Divyavadana as a person’s name rather than a book title. Before considering the context, remark the unobtrusive bias in the assumption that the supposedly “undeniable” conflict between the king and the monks proves the king’s intolerance. The question of responsibility is evaded: what had been the monks’ own contribution to the conflict?

When Shivaji had a conflict with the Brahmins (see Jadunath Sarkar: Shivaji, Orient Longman, Delhi 1992/1952, p.161, 165-167), all secularists and most Hindus blame the “wily, greedy” Brahmins; but the Buddhist monks, by contrast, are assumed to be blameless.

The story is given in two near-contemporaneous (2nd century AD) Buddhist histories, the Ashokavadana and the Divyavadana; the two narratives are almost verbatim the same and very obviously have a common origin (Avadana, “narrative”, is the Buddhist equivalent of Purana; Divyavadana = “divine narrative”).

This non-contemporary story (which surfaces more than three centuries after the alleged facts) about Pushyamitra’s offering money for the heads of monks is rendered improbable by the well-attested historical fact that he allowed and patronized the construction of monasteries and Buddhist universities in his domains.

After Ashoka’s lavish sponsorship of Buddhism, it is perfectly possible that Buddhist institutions fell on slightly harder times under the Shungas, but persecution is quite another matter. The famous historian of Buddhism Etienne Lamotte has observed: “To judge from the documents, Pushyamitra must be acquitted through lack of proof.” (History of Indian Buddhism, Institut Orientaliste, Louvain-la-Neuve 1988/1958, p.109).

In consulting the source texts I noticed a significant literary fact which I have not seen mentioned in the scholarly literature (e.g. Lamotte, just quoted), and which I want to put on record.

First of all, a look at the critical edition of the Ashokavadana (“Illustrious Acts of Ashoka”) tells a story of its own concerning the idealization of Buddhism in modern India. This is how Sujitkumar Mukhopadhyaya, the editor of the Ashokavadana, relates this work’s testimony about Ashoka doing with a rival sect that very thing of which Pushyamitra is accused later on:

At that time, an incident occurred which greatly enraged the king. A follower of the Nirgrantha (Mahavira) painted a picture, showing Buddha prostrating himself at the feet of the Nirgrantha. Ashoka ordered all the Ajivikas of Pundravardhana (North Bengal) to be killed. In one day, eighteen thousand Ajivikas lost their lives. A similar kind of incident took place in the town of Pataliputra. A man who painted such a picture was burnt alive with his family. It was announced that whoever would bring the king the head of a Nirgrantha would be rewarded with a dinara (a gold coin). As a result of this, thousands of Nirgranthas lost their lives…(S. Mukhopadhyaya: The Ashokavadana, Sahitya Akademi, Delhi 1963, p.xxxvii; in footnote, Mukhopadhyaya correctly notes that the author “seems to have confused the Nirgranthas with the Ajivikas”, a similar ascetic sect; Nirgrantha, “freed from fetters”, meaning Jain.)

Only when Vitashoka, Ashoka’s favourite Arhat (an enlightened monk, a Theravada-Buddhist saint), was mistaken for a Nirgrantha and killed by a man desirous of the reward, did Ashoka revoke the order.

Typically, Mukhopadhyaya refuses to believe his eyes at this demythologization of the “secular” emperor Ashoka:

This is one of the best chapters of the text. The subject, the style, the composition, everything here is remarkable. In every shloka there is a poetic touch.(…) But the great defect is also to be noticed. Here too Ashoka is described as dreadfully cruel. If the central figure of this story were not a historic personage as great and well-known as Ashoka, we would have nothing to say. To say that Ashoka, whose devotion to all religious sects is unique in the history of humanity (as is well-known through his edicts) persecuted the Jains or the Ajivikas is simply absurd. And why speak of Ashoka alone? There was no Buddhist king anywhere in India who persecuted the Jains or the Ajivikas or any other sect. (The Ashokavadana, p.xxxviii)

This just goes to show how far the idealization of Buddhism and Ashoka has gotten out of hand in Nehruvian India.

When the modern myth of Ashoka as the great secular-Buddhist ruler is contradicted by an ancient source (one outspokenly favourable to Buddhism and Ashoka) which shows him persecuting rival schools of thought, the modern scholar (a Hindu Brahmin) still insists on upholding the myth, and dismisses the actual information in the ancient source as a “great defect”.

Moreover, the non-persecution of other religions, claimed here for Ashoka against the very evidence under discussion, was not unique at all: it was the rule among Hindu kings throughout history, and the Buddha himself had been one of its beneficiaries.

It is at the end of the Ashokavadana that we find the oft-quoted story that Pushyamitra offered one dinara for every shramanashirah, “head of a Buddhist monk”. (Mukhopadhyaya: The Ashokavadana, p.134) Not that he got many monks killed, for, according to the account given, one powerful Arhat created monks’ heads by magic and gave these to the people to bring to the court, so that they could collect the award without cutting off any real monk’s head.

At any rate, the striking fact, so far not mentioned in the Pushyamitra controversy, is that the main line of the narrative making the allegation against Pushyamitra is a carbon copy of the just-quoted account of Ashoka’s own offer to pay for every head of a monk from a rivalling sect.

Hagiographies are notorious for competitive copying (e.g. appropriating the miracle of a rival saint, multiplied by two or more, for one’s own hero); in this case, it may have taken the form of attributing a negative feat of the hero onto the rival.

But there are two differences. Firstly, in the account concerning Pushyamitra, a miracle episode forms a crucial element, and this does not add to the credibility of the whole. And secondly, Ashoka belongs to the writer’s own Buddhist camp, whereas Pushyamitra is described as an enemy of Buddhism.

When something negative is said about an enemy (i.c. Pushyamitra), it is wise to reserve one’s acceptance of the allegation until independent confirmation is forthcoming; by contrast, when a writer alleges that his own hero has committed a crime, there is much more reason to presume the correctness of the allegation.

Mukhopadhyaya can only save Ashoka’s secular reputation by accusing the Ashokavadana author of a lie, viz. of the false allegation that Ashoka had persecuted Nirgranthas. Unfortunately, a lie would not enhance the author’s credibility as a witness against Pushyamitra, nor as a witness for the laudable acts of Ashoka which make up a large part of the text.

So, Mukhopadhyaya tries to present this lie (which only he himself alleges) as a hagiographically acceptable type of lie:

In order to show the greatness of Buddhism, the orthodox author degraded it by painting the greatest Buddhist of the world as a dreadful religious fanatic. (The Ashokavadana, p.xxxviii).

However, contrary to Mukhopadhyaya’s explanation, there is no hint in the text that the author meant to “show the greatness of Buddhism” by “painting the greatest Buddhist as a religious fanatic”.

By this explanation, Mukhopadhyaya means that the writer first made Ashoka commit a great crime (the persecution of the Nirgranthas) to illustrate the greatness of Buddhism by sheer contrast, viz. as the factor which made Ashoka give up this type of criminal behaviour.

There is a famous analogy for this: the cruelty of Ashoka’s conquest of Kalinga was exaggerated by scribes in order to highlight the violence-renouncing effect of Ashoka’s subsequent conversion to Buddhism.

But in this passage, Buddhism plays no role in Ashoka’s change of heart: it is only the sight of his own friend Vitashoka, killed by mistake, which makes him revoke the order. And it was his commitment to Buddhism which prompted Ashoka to persecute the irreverent Nirgranthas in the first place.

Buddhism does not gain from this account, and if a Buddhist propagandist related it nonetheless, it may well be that it was a historical fact too well-known at the time to be omitted.

By contrast, until proof of the contrary is forthcoming, the carbon-copy allegation against Pushyamitra may very reasonably be dismissed as sectarian propaganda. Yet, we have seen how a 20th-century Hindu-born scholar will twist and turn the literary data in order to uphold a sectarian and miracle-based calumny against the Hindu ruler Pushyamitra, and to explain away a sobering testimony about the fanaticism of Ashoka, that great secularist avant la lettre.

Such is the quality of the “scholarship” deployed to undermine the solid consensus that among the world religions, Hinduism has always been the most tolerant by far.

At rate, this sort scholarship is another bad case of the political abuse of history concerning Ashoka, glorified by Jawaharlal Nehru as the emperor who was first bad and Hindu, then “converted” to Buddhism and became good. This wilfully distorting spin has led to the ignoring of an earlier testimony which suggests a different story.

(This slightly edited essay is a chapter in the author’s book: Ayodhya, the Case against the Temple, Delhi 2003.)