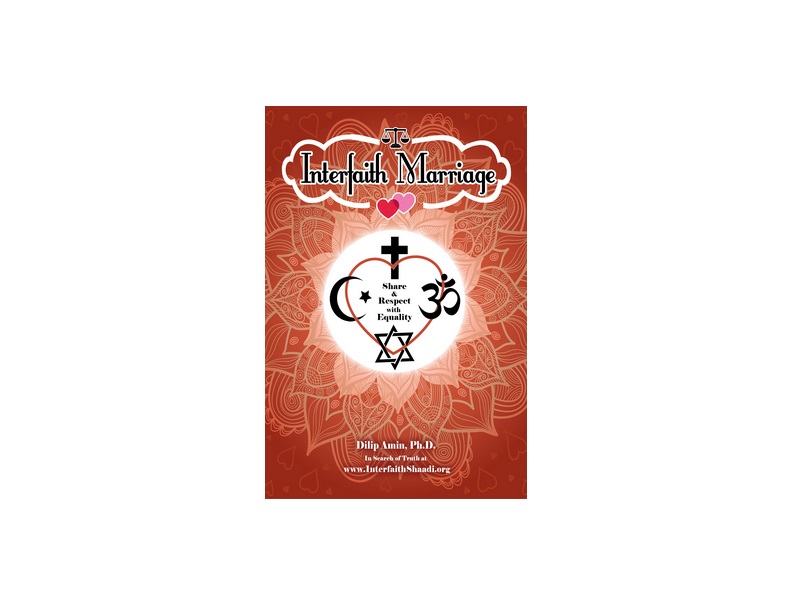 Interfaith Marriage: Share and Respect with Equality by Dr. Dilip Amin is published by Mount Meru Publishing and is available on Amazon.

Interfaith Marriage: Share and Respect with Equality by Dr. Dilip Amin is a wonderful primer on the dynamics, complexities and nuances of interfaith marriages in an American context, although I am sure the knowledge presented would be equally applicable to an Indian context. The aim of the book is to promote interfaith marriage with equality, so as to ensure that religious pluralism and tolerance, rather than religious exclusivism becomes the order of the day. The book is replete with experiences of real life examples of interfaith couples and explores the various kinds of conflicts they encounter during their courtship, marriage and later both during and after childbirth. This is not an academic book filled with dry facts, but rather a manual or user-guide to real life issues and responses which young people are more likely to relate to and the conclusions and assertions are backed by evidence and empirical data.

As the author points out with facts and figures, most interfaith conflicts appear only a few months after marriage or in worst case after the birth of a child. The book attempts to help educate new adults so that they make fully informed decisions before committing to long-lasting married life. In the author’s own words:

“Everyone likes to have equality in many aspects of life. Religious equality in an interfaith marriage should not be any different, though it is difficult to define. Further, tolerance toward religious differences may be high during the dating period but these differences may become a major point of conflict later in married life. The author’s objective here is not to define for readers what is right and wrong, but to provide dating couples with talking points to help them make fully “informed” decisions [1].”

The author, Dr. Dilip Amin, is a lifelong (42 years) researcher in the medical field now settled in America. He was born in Gujarat, India, and has travelled to 27 countries to learn different cultures and religions. He has been the President of Plymouth Balvihar, Blue Bell, Pennsylvania, USA, and is a founder of the Balvihar at Sanatan Mandir, San Bruno, California. Dr. Amin is a Director of Peninsula Multifaith Coalition in the San Francisco Bay area. He is a certified speaker at Islamic Networks Group, San Jose, California. He is a Dharma Ambassador with Hindu American Foundation. He co-authored the book Vivaha Samskara: The Hindu Wedding Ceremony. Dr. Amin founded a Forum for Interfaith Marriage with Equality (InterfaithShaadi.org) in 2009 where he guided more than 900 youths in their interfaith love relationship issues.

Why is the understanding of inter-faith marriage so important? As the author points out, interfaith marriages are now an integral part of modern life and we need to be adequately prepared for it. He shares some important statistics on this topic in an American context to set the tone of the discussion [2]:

Interfaith marriage is on the rise, especially among modern young people and second or later generation immigrants. A marriage in an interfaith context is not merely between two individuals but rather between two different communities of widely diverging customs, values, attitudes and background. Often, in-laws and others apply pressure for the religious conversion of the spouse. In an interfaith Muslim marriage, conversion to Islam is mandatory before the nikaah, and children have to be raised as Muslims [3]. In interfaith Christian marriages, baptism of spouse and especially of future children becomes an important prerequisite of church weddings [4].

Dr. Dilip focuses on some of the key differences between Abrahamics and Dharmics, and explains the interfaith issues from fundamental principles of the religions. He points out that Dharmics like Hindus typically believe in One God (or Truth / Brahman) , who can be expressed in various forms like Krishna, Lakshmi, Ganesh and others, and who is worshipped as a murti which is often mis-translated as an idol. Hindus are thus often accused of being idol worshippers or polytheists. Many modern Hindus, especially in the West also believe themselves to be polytheistic and idol-worshippers. While there is nothing wrong in being an “idol worshipper” or a polytheist, problems crop up when Hindus are falsely characterised as being polytheistic idol-worshippers by Abrahamic faiths like Islam and Christianity. Islam insists that Allah is the only God and must alone be worshipped. Anyone who worships “other” Gods (like Dharmics) is committing shirk and is a criminal as per Islam. Similarly, Christians believe in only one God and condemn worship of others as a criminal offence. It is the duty of Muslims and Christians to bring more people into their fold through conversion by way of marriage and by ensuring that the religion of the children is Abrahamic. In other words, while Dharmic faiths are naturally inclusive and plural, the Abrahamics are by default exclusive and expansionist, and thus to ensure that marriage with equality happens, the couples need to be aware of exactly what they are getting into.

Dr. Amin provides a lot of evidence to highlight the grave issue of love-proselytization (or love-jihad) where certain communities and their leaders use wedding as a tool for religious expansion. He says that it is “fashionable to talk of being secular and tolerant in colleges, and thus not always easy to recognize an exclusivist” and in order to assist people “to spot exclusivist thinking in the intended spouse, simple lists of questions are provided in this book.” In many cases even Muslims themselves advise against Dharmic-Muslim marriage. One woman highlights the Muslim point of view of a proposed Hindu-Muslim union as below:

“Please be aware in nikah, your hindu parents are not allowed to attend, your guy wouldn’t be a true muslim if he allows them to attend, as you said you are not going to convert plz leave the muslim guy, plz don’t spoil the muslim boy, our religion does not permit marriage to you, a kafir, you are haram and you kids will be harami, if you marry him. I wonder how did our muslim boys are marrying you Hindus, as your parents have no love for you, so they tolerate you getting our muslim guy, you hindu girls are cheapest. I hope you see the truth and become muslim and leave you stupid faltu religion. I will never allow my daughter to marry a hindu, bloody F…..”

To this end the author has crated extensive checklists to check the compatibility of prospective spouses in terms of religious attitudes and openness to equality. During the initial phase of courting, everything appears hunky-dory, and the prospective couple do not focus on key areas of potential conflict which would eventually crop up once the novelty of the courting phase gets over, and reality sets in. Some of the issues that need to be sorted out at the very beginning:

As the author repeatedly points out, it is very important for interfaith couples to engage in serious dialogue on these issues not only between themselves but also with their future family members. It is better to have a conversation now and a broken engagement with immediate heartbreak, rather than reserve the pain for later after marriage or after having children. As a Hindu, a request for BBS from an Abrahamic spouse must be treated as a warning sign of potential future issues. If a person does convert for marriage, he or she should be prepared to give up his or her old tradition completely, and accept a new alien way of life. There is no equality in such a marriage, and it is no different than forced religious conversion. On the other hand marriage among Dharmics (like Hindu-Jain) promote greater equality and generally do not lead to complications on account of conversions. Zoroastrianism and Judaism are non-Dharmic faiths, but do not engage in proselytism [5]. A Jew-Hindu marriage generally has less conflicts compared to a Hindu-Muslim or Hindu-Christian marriage but a major issue arises after childbirth in the matter of circumcision of a baby boy. Prospective Hindu-Jewish couples need to address all these issues at the earliest, to avoid conflicts in later married life [6].

The author also warns against what is known as “fake-conversion” to appease one’s spouse and in-laws. In almost all cases, what one would think of as a temporary conversion to another religion, is in fact legal conversion. For example, if a Hindu woman gets baptized or reads the shahada before her nikaah thinking that it is a mere ceremony without any significance, she would be wrong. Legally she would become 100% Christian or Muslim, and her children will in most cases be raised as Christians and Muslims. Many such practical issues are addressed in this book. The section on scriptures is particularly instructive, and one needs to go through it to understand why certain religions behave the way they do when it comes to inter-faith marriages [7].

“As a Christian Pastor I am always looking for resources that equip my ministry. The author has written a respectful and “tell it like it is” book that brings together information on a subject that breaks apart many families. This book is helpful, insightful and a gem for people working with couples from different faiths.”

“Interfaith Marriage: Share and Respect with Equality” is therefore an indispensable reading for aspiring interfaith couples and covers almost all conceivable aspects of inter-religious marriages, like conversion, dealing with in-laws, raising children, legal aspects of any future separation, and sets realistic expectations. As the author says “pre-marital problems generally grow into ‘Hindenburg class disasters’ after marriage [8]” and hence prevention is better than cure to avoid marriage meltdown and in this regard, this book helps couples to be forearmed by being forewarned.