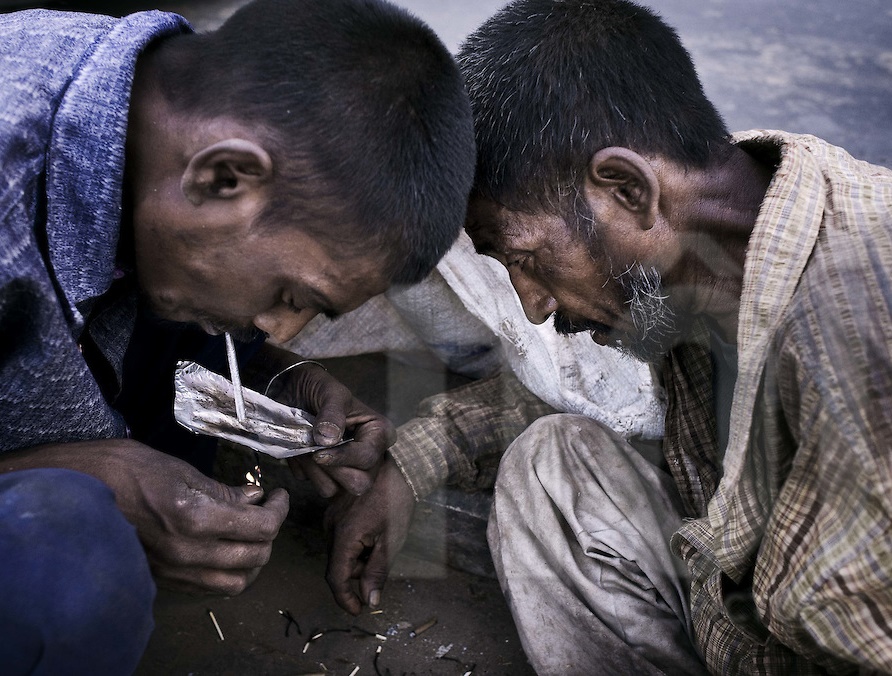 Punjab is the most famous name in the field of Drug addiction and drug menace. But now after “Udta Punjab”, the competition appears to have emerged in the neighboring state “Udta Rajasthan”. The state of Rajasthan is in fact fighting with the menace of Drug addiction for several decades. In a journal published recently, it was reported that 20% of the population of Rajasthan is addicted to opium. 40% of the addicted population is between the ages 40-50 years. Out of this, 80% are literate. In another study, it was found that 25% of children in Rajasthan are addicted to injectable drugs. Opium, Doda, Postt, Smack, and Heroin are the leading sedatives consumed in the state.

Several reports have suggested that the Rajasthan Border is one of the most porous drug routes for international as well as domestic trade. A report suggested that the Sirsa Village of Haryana lying between the border of Rajasthan and Punjab has 70% of its population addicted by some kind of sedatives.  The village is the trade route between the two states and Rajasthan acts as the favored route to transport drugs to the state of Punjab.

Opium Poppy and Poppy Husk (Doda Posht) are the most common form of drugs in the state. The sale of poppy husk was legal in the state till March 2016. It was earlier closed in March 2015, but was resumed after the wide spread violent disruptions across the state. The extent of addiction can be perceived by the fact that the state had 82 legal opium depots, which sold 18,000 quintals of poppy husk in 2013. Poppy cultivation is carried out in seven districts of Rajasthan – Udaipur, Chittorgarh, Pratapgarh, Bhilwara, Boondi, Kota, and Baran – for medicinal purposes. The agents, who sell opium in the village, procure the opium from both the licensed fields and illegal fields, and then sell them locally. The districts of Barmer, Sri Gangangar, Hanumangarh, Jodhpur and Bikaner are known for high consumption of Doda/Opium.

Heroin is the second most consumed drugs in the state of Rajasthan. It is consumed by as much as 30% of the total drug abusers. It is smuggled into India, originating from the border towns of Sahiwal, Rahimyar Khan, Sukkur and Khokhrapar in Pakistan and from there the consignments crosses the border to various receiving towns such as Churu, Sikar, Kishangarh, Ramgarh, Barmer, Jaisalmer, and Anupgarh in Rajasthan, from where they are subsequently transported to Delhi and Mumbai. Over 200 Kgs of Heroin has been recently seized by the BSF, along the Indo-Pak border .

The usage of painkillers and other sedative tablets in the place of drugs is also on the rise in the state of Rajasthan. Several banned medicines and cough-syrups are consumed by local children because of their cheap rates and easy availability in the medical stores. The trend was specifically observed in Sri Ganganagar district. The easy availability of sedative pills without prescription is another issue that is adding to the rising drug menace.

Since, the traditional drugs like opium and alcohol are not readily available; children and youngsters have started using sedative tablets. These tablets are sleeping pills or powerful pain killers. Some of the medicines used for this purpose are Corex, Rex cough syrup, Alprozone, Proxyvon, etc. The police have been trying hard to nab the illegal sales of drugs and curb the menace. Nevertheless, the chemists still succeed in selling the sedatives without prescription. Hence, the traditional medical supply units are not only directly involved in the growth of drug trade, they are also aiding it by creating larger number of addicts. Moreover, a new form of the delivery chain through unregistered doctors has developed in the region. In several villages, untrained doctors give medical advice and provide the medicines. It was found that such doctors also act as suppliers of the sedative tablets to the youth. They procure the medicines either from the pharmaceutical companies or from the stockists. Later, they supply it directly to the consumer or through the channel of grocery stores spread it in the market.

Sri Ganganagar district of Rajasthan, which is in the neighborhood of Punjab, is the most affected district in terms of drug menace. It is like a mini Punjab in Rajasthan, which suffers from the same problems that are prevalent in the neighboring state. Another issue of concern is the fact that the Sri Ganganagar district is also an adjoining district of Pakistan and numerous cases of involvement of Pakistani nationals in the Drugs supplying chain have come to light. It appears, after ruining Punjab through Drugs, Rajasthan has now become the new target of the ISI to disrupt Indian border.

Golden Crescent is the most famous Drug route, which starts from Iran and goes through Afghanistan and Pakistan and finally enters into Punjab. Afghanistan is also a matter of concern for India, since, it grows 90 percent of the world’s opium and if 2014 estimates are anything to go by, Afghan farmers grew opium on a whopping 244,000 hectares land. India in general, and Punjab in particular, is one of the favored destinations, to which opium is smuggled into. From Punjab, it smuggled into other parts of India. According to various intelligence reports, Pakistan willfully supports the drug peddlers and suppliers to disturb Indian borders.

After Punjab came under media scanner, drug smugglers are now searching for a new destination, which is safe and away from media glare. They are, thus, entering into Rajasthan via Sri Ganganagar. Drug addiction and Drug smuggling have not only emerged as a serious social menace affecting the country’s youth, but has also emerged as a serious security concern for the entire nation. As the demography of Indian borders is changing day by day, radicalization and fundamentalism are also increasing in the bordering areas. The increasing drug menace is only adding to the increasingly volatile situation that is emerging along the western borders. If the drug menace is not handled at this stage, it won’t be long, before it spreads to rest of the country and we will be forced to witness an ‘Udta-India’.