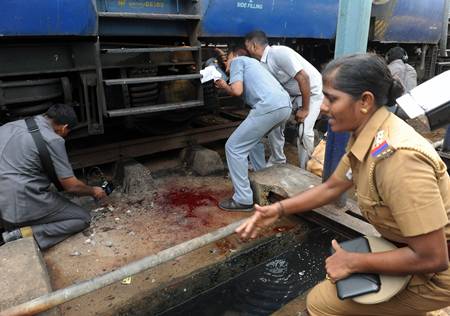 The identity of those who carried out the Chennai bomb blasts isn’t known yet. However, Col. Hariharan thinks that it is probably the handiwork of an Islamic group orchestrated by Pakistani operatives based in Sri Lanka. Col. Hariharan is a retired military intelligence specialist on South Asia and has served as the head of intelligence of the Indian Peace Keeping Force in Sri Lanka. He is associated with the South Asia Analysis Group. So, his opinion carries weight.

Even if it turns out that some other group such as the Maoists was behind the blast, the sheer preponderance of Islamic terror attacks necessitates an understanding of the Islamic psyche. An Islamic terrorist doesn’t arise in a void. He is a product of a cultural milieu that warps his view of reality.

I was conversing with a Muslim woman of Pakistani descent recently. Her family is very wealthy and had settled in Kenya three generations ago. She had been educated in exclusive schools in Kenya and the U.K. before settling down in the Silicon Valley. She claimed that her grandfather left Pakistan for Kenya because he faced discrimination in his hometown of Lahore. According to her version of the story, Hindus were a majority in pre-partition Lahore. Muslims weren’t allowed to own businesses. They couldn’t even drink water from the same tap used by the Hindus. Unable to live under this oppression, her grandfather left for Kenya.

I asked her whether she was aware that India was partitioned on communal lines and Lahore went to Pakistan because it was predominantly Muslim. A quick Google search revealed that according to the 1941 census, Muslims constituted 64.5 percent of Lahore’s population. Another academic paper pointed out that since the end of the 19th century Hindus had felt insecure in Lahore as a result of organized Islamic communalism. The police and military in Lahore were entirely Muslim and British officials even predicted a Hindu and Sikh holocaust. I pointed out that an insecure minority couldn’t have oppressed a dominant and militant majority. I pointed out that even if one were to pretend that the Muslims were oppressed in Lahore, they would’ve just migrated to a Muslim-dominated area within Pakistan. It would’ve taken enormous resources to migrate to Kenya and start businesses. Her grandfather went to Africa in search of prosperity like many Muslim merchants of that era did.

Facts and reason had little effect on her.

However, she is not alone. She is merely one of the numerous Muslims whose worldview has been warped by family upbringing. The warped Islamic worldview has the following elements:

An individual raised in such an Islamic milieu internalizes and propagates the myth that the Hindus are to be blamed for the imaginary grievances of Muslims. A Hindu is demonized and dehumanized. As a result, Muslims rarely empathize with the plight and suffering of Hindu women who are abducted, raped, and forcibly married to Muslims in Pakistan. It is this psyche which conditions a Muslim to take to terrorism. The terrorist believes that he is avenging the collective injustice suffered by the Muslims at the hands of Hindus. He believes that his act of terrorism is divinely mandated and would be rewarded with a place in paradise.

One must understand this psyche to root out Islamic terrorism. So long as Muslims resist embracing modernity and integrating with mainstream society, their worldview would continue to remain warped. It would continue to produce new terrorists that would target the infidels. A civil society cannot turn a blind eye to this terrible reality. An innocent 24 year-old engineer died in the Chennai blast. We have an obligation to pay her a tribute by addressing the root cause of terrorism. We have a duty to ensure that such acts of terrorism do not recur.

Islamic terrorism would disappear when Muslim women abandon the burqa for the bikini, when the mullahs are denied a captive audience, when Dawkins displaces the Quran, and when the insidious myths Muslim parents and grandparents teach unsuspecting children at homes are reasonably debunked at schools.

Muslims, who are brainwashed and whose worldview is warped by a divisive medieval ideology, are as much victims as they are perpetrators of terrorism.

The author is a Silicon Valley-based writer, an atheist, a practicing orthodox Hindu, and author of What Every Hindu Should Know About Christianity.