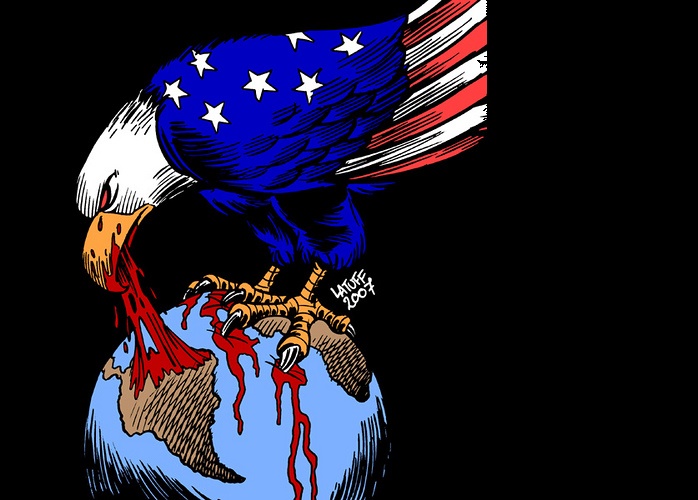 US victory in the Cold War has been followed by an unabashed attempt to consolidate its triumph rather than create a more harmonious international order to overcome the fear of nuclear war. All undertakings given after the Soviet withdrawal from Eastern Europe were abandoned with alacrity. The US imperial upsurge was preceded by the blatant attempts to subvert post-communist Russia itself through bogus interventions during the 1990s, under the aegis of international institutions, to bring about supposed economic reform. The goal was to create economic chaos and install domestic political forces in Russia, like Boris Yeltsin, willing to accept US global primacy. When that failed, the US began moving the perimeter of the Berlin wall to the very border of the former USSR, by removing sitting governments in countries proximate to Russia and cajoling their leaders to join NATO and the EU.

Georgia and the Ukraine became particular objects of US machination, once the rest of Eastern Europe succumbed and were absorbed into the Western fold, with Poland resuming its historic aggressive posture against Russia. The anti-Russian leadership of most former communist nations cooperated enthusiastically with the NATO goal of cornering Russia once and for all. But the virtual declaration of war on Russia prompted the rise of a hard line leader, in the shape of Vladimir Putin, who began to respond with military preparedness and global military activism. Unbelievably, Western commentators refuse to take on board the virtual destruction of Russia, within living memory, from the direction of its western border by the Nazis and repeated earlier invasions, dating back several centuries.

The European Union’s eastward expansion is strongly supported by the US. The purpose is to indissolubly tie small and weak economies to the EU, as a means to securing their commitment to NATO by making membership of the EU too valuable to sever. This is why both Poland and Romania are hosting US missiles that pose a direct threat to Russian security. This is the same reason that Barack Obama spoke against Britain’s exit from the EU, since it is their most pliable asset within it. US global imperial re-assertion has also reached Latin America that was enjoying a brief period of respite from suffocating US embrace in the aftermath of the end of the Cold War. Regime change in Brazil, Venezuela and elsewhere is being accomplished by inciting resentful local elites, who had been in retreat owing to the election of populist governments.

The policy of erasing all vestiges of a Russian footprint is also occurring with unbridled violence elsewhere too, with regime changes in the Middle East and Africa. Much of the Middle East has been systematically razed to the ground, removing local recalcitrants like Muammar Gaddafi and Saddam Hussein, to the accompaniment of genocidal brutality that recalls Caesar’s ruthless pacification of Gaul. The subsidiary aim appears to be to forestall possible Chinese entry as a major presence. WikiLeaks evidence also highlights a cynical disregard for the prodigious human suffering entailed in the region. US imperialism in the Middle East has culminated in the destruction of independent states and millions of deaths and continuing bitter civil strife. The murder of Gaddafi, whom President Ronald Reagan had sought assassinated in 1986, was inevitable because he foolishly sought to thwart US attempts to establish military and intelligence bases in Mali for Africom, the US regional headquarters for Africa. The French were also mightily annoyed with him for his failure to order US$ 14 billion worth of arms that he had promised to purchase.

Modern Islamic terrorism itself is also a product of Anglo-American patronage, with long historical roots. It has been used against secular Arab nationalism, Russia, and India, through Pakistani proxies. This association has not ebbed in the aftermath of the recent global upsurge of Islamic terrorism. US calculus on the usefulness of Islamic terror primarily derives from cost-benefit analysis and is indifferent to the price paid by third parties. Africa is now replete with US drone bases, without the likes of Patrice Lumumba (murdered in 1961 at CIA instigation), Kwame Nkrumah of Ghana and Muammar Gaddafi, to oppose primacy. Britain remains a faithful ally of US imperial ventures everywhere and France itself is notoriously imperialist, reluctant to permit genuine African independence in former colonies. Its constant African adventurism is motivated by the rich uranium deposits of the Sahara that allow it to claim world power status.

The US has never been a genuine welfare state in the European mould that would have obliged a policy focus on domestic economic well-being instead of imperial ventures. Instead, it has long been an imperialist country whose raison d’être is conquest and control, expanding in successive waves, from Latin and Central America to the Philippines in 1898, and the wider world beyond since WWII. The serious contemporary domestic economic crisis has not deterred its policy of violent and brutal imperial ambition, advanced without apology by the so called necons, who seem to have inherited the mantle of Nazism. But the timing of its surging foreign ventures, irrespective of which party or individual leads the nation, must also be understood as a means of pre-empting an incipient Chinese challenge, before the latter’s enhanced economic and military capacity pose a serious threat to US aspirations.

It would be a grievous error to judge that India is somehow immune from subordination through US interference and conspiracies. India happens to be on its radar as a recalcitrant state that needs to be subdued, by using a dire two-front Sino-Pak threat to force it into an unequal relationship with the West. Some of the recent campaigns against the Modi government are an attempt to force policy change, especially permit accelerated religious conversions and favors to US contractors. Deepening Indo-US engagement is entirely opportunistic from a US perspective, dictated by India’s usefulness to the US global posture and its welfare does not enter the calculus at all. Unfortunately, cupidity and self-flagellation are the traditional hallmarks of India’s perceptual universe, unable to comprehend a world in which its supposed elites sleepwalk, deeply insecure. Indian intellectual resources seem unable to overcome a culture of self-doubt, miss-steps and grotesque misunderstanding of the world beyond its shores.

Historically, India has been viewed as a resource by imperial predators, as Lord Curzon emphatically noted in 1908, providing slaves and plunder for a 1000 years to the subaltern Mughal Emirs of Persia and, subsequently, British looters. India’s post-independence incarnation remains much the same for imperialists, with the US eager to use Indian manpower and bases to fight wars, much as the British colonial power had done. But in the period up to the late 1990s, after independence, India declined to join the West in its multifarious conspiracies and was subject, as a result, to constant efforts at subversion. This is why the Anglo-Americans found in Pakistan, a useful ally to discipline India with, seeking to permanently keep it off balance through military threats from across the border and terrorism inside its national territory.

India’s local would-be grand subjugator, China, has now adopted Pakistan to harass India, outsourcing ready-made nuclear weapons and delivery systems to terrorize India. Indeed, it can be surmised that the Godhra episode was a joint operation between Pakistan, China and, possibly, the US, alarmed at the prospect of war between two nuclear-armed states owing to Indian mobilization for Operation Parakram. Once, Indian army units were diverted to Gujarat in the aftermath of the post-Godhra violence, the prospect of Indian military chastisement of Pakistan, for trying to decapitate its entire political leadership, became less likely.

India’s political class and bureaucrats have in the past decade allowed the Christianization of Nepal to facilitate US activities for future operations against China through Tibet, failing to understand this dramatic change is a two-edged sword. The prize of a politically subjugated India, by creating an internal Christian constituency and other political assets, remains a goal, the US will not easily abandon. The West has no compunction killing millions in the Middle East to achieve the political objective of regime change, but Indians appear to believe, they live in a different planetary system and therefore, immune to the brutal rules of imperial logic! But the rampant genocidal politics, the world over, demonstrate little has changed, since the British departed India, precipitating the twin holocausts of famine and partition, as it fled. And there would be no hesitation in cleaving India again should it be in the interest of NATO and feasible.

Intervening militarily in India to turn it into a neo colony like much of the developing world is not practicable. But subverting India has proven deceptively easy and has accelerated in the 21st century, after it foolishly opened its doors wide to supposed consular and allied activities and allowed foreign governments to establish offices in major cities. Numerous Indian politicians and public officials have since become direct or indirect assets of foreign powers, who have been bribed and/or blackmailed into treasonous cooperation.

Being a foreign asset is, in fact, unremarkable for people of Indian origin and that encompasses much of the social science and humanities academic fraternity abroad, collaborating with governments hostile to India. The coordinated international chorus against the BJP-led government, on the fabricated grounds of alleged violations of democratic rule, freedom of expression and its intolerance, has an extraordinarily familiar ring, straight out of the operational handbook of the CIA. Of course, there are also specific foreign grievances against Indian behavior, like the failure to purchase the Euro fighter, the British government was desperate to sell, which upset it bitterly, when a French fighter aircraft was purchased instead.

Much of the mainstream Indian media itself is basically a foreign presence in its body politic, available for purchase. India’s domestic academics have long been mobilized by foreign intelligence agencies to engage in low level sniping at its central government to cause it discomfiture. But, these they are mostly irrelevant, since the level of pay does not attract, with some exceptions in science and technology, real talent nor do professorships confer stature. Other levels of Indian society, including industrialists and entrepreneurs, are often suspect, because they engage in illegal activity and depend on foreign goodwill to persist and escape sanctions for their criminality.

India is currently tethered like a goat, which doesn’t really know the fate that awaits it and happily munching the fodder put before it. The preparation for the kill is proving long-winded, because the goat is oversized, but a combination of carefully instigated and nurtured internal dissension and the permanent alarming threat of a double external assault do have a reasonable chance of eventual success. The cue for internal dissension is a multilayered conspiracy of treason from within and without, the latter in the shape of illiterate academic half wits abroad, who are mostly hired assassins. Some of them imagine they are serving the cause of humanity by helping to dismantle their own nation, which has hardly had any respite from endless horrors in over a thousand years.