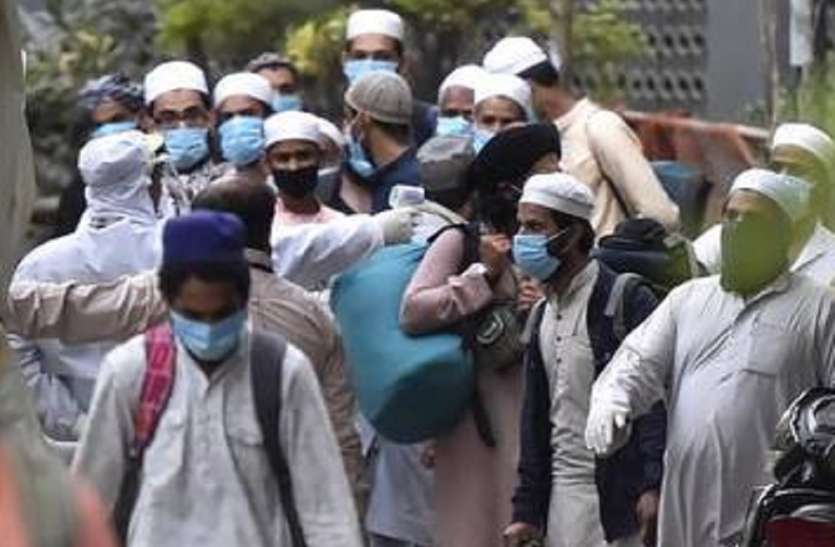 The Tablighi Jamaat’s mission is to spread Islam around the world but right now it is vying with China to become the biggest super-spreader of Coronavirus. At least 10 deaths and over 300 hospitalisations are being linked to the Jamaat’s congregation at its headquarters in Delhi’s Nizamuddin Markaz Masjid or Banglewali Masjid, which has become one of the 10 Coronavirus “hotspots” in the country (1). These numbers are likely to go up as more than 8,000 Jamaat members had congregated at the dargah (tomb), and the number of people they came in contact with could be in the tens of thousands.

Forget shame or regret at having flouted government orders against large gatherings during a pandemic, the members of the Tablighi Jamaat spat out of the windows of the bus that was taking them to a quarantine centre. They threw tantrums, made unreasonable demand for food items, abused officials and spat at doctors and staff in the centre (2).

When not engaged in bio-jehad, the Tablighi Jamaat has been linked to a string of terror organisations, including the Harkatul Ansar, Harkatul Mujahideen, Jaish-e-Mohammad, Lashkar-e-Jhangvi, Sipah-e-Sahaba Pakistan and the Taliban. People associated with the Jamaat have been linked to terrorist incidents like the San Bernardino massacre by a Pakistani husband and wife team (3).

US officials say that the cult, with 50,000 members, is rife with jehadis, and jehadi groomers are recruiting at mosques in at least ten American states. “We have a significant presence of Tablighi Jamaat in the United States, and we have found that al-Qaeda used them for recruiting,” says the FBI (4).

The Tablighi Jamaat’s contempt for healthcare staff, police and the government is owing to the fact that the movement does not consider individual states to be legitimate. According to the French Tablighi expert Marc Gaborieau, its ultimate objective is nothing short of a “planned conquest of the world” in the spirit of jehad (5).

The Tablighi Jamaat’s deep-rooted fanaticism and hatred for kafirs (non-Muslims) can be traced to its origins as an offshoot of the radical Deobandi movement. The cult was established in 1927 by Muhammad Ilyas al-Kandhlawi in Mewat near Delhi. Ilyas’ followers were intolerant of other Muslims, especially Shi’ites, let alone adherents of other faiths. Part of Ilyas’s impetus for founding the Jamaat was to counter the inroads being made by Hindu missionaries who were successful in bringing many neo-Muslims back to the Hindu fold. Syed Muhammad Mian, a writer of the Jamiat Ulema-i-Islam, writes that as a result of this initiative, more than 11,000 Hindus re-converted to Islam.

One needs to get into the DNA of the cult to understand its mentality. The Nizamuddin mosque and dargah are both named after Hazrat Nizamuddin Auliya (1238-1325), a Sunni Muslim scholar and Sufi saint of the Chishti Order. The Tablighi Jamaat’s choice to establish itself in Nizamuddin in the 1930s was motivated by proximity to the dargah and its magnetic draw on Muslim communities across India. Scott Kugle and Bruce Lawrence suggest that Tablighis treat the constant flow of visitors produced by the dargah as a means to spread a conservative message (6).

Face of the Sufi Islamist

Leftists and seculars, who in their little heads imagine that Sufis were gentle, long-haired mystics who smoked weed and danced away the night, should know what Nizamuddin Auliya felt about people like them. Toeing the orthodox line, he condemned the Hindus to the fire of hell, saying: “The unbelievers at the time of death will experience punishment. At that moment, they will profess belief (Islam) but it will not be reckoned to them as belief because it will not be faith in the Unseen… the faith of (an) unbeliever at death remains unacceptable.” (7)

Auliya asserted that, “On the day of Resurrection, when unbelievers will face punishment and affliction, they will embrace faith but faith will not benefit them… They will also go to Hell despite the fact that they will go there as believers.” (8)

In his khutba (sermon), Auliya condemned the infidels as wicked, saying, “He (Allah) has created Paradise and Hell for believers and the infidels (respectively) in order to repay the wicked for what they have done.” (9)

During the reign of the cruel and barbaric Sultan Alauddin Khilji, when Qazi Mughisuddin inquired about the prospect of victory in the jehad launched against Hindu kingdoms in South India under the command of Malik Kafur, Auliya uttered in effusive confidence: “What is this victory? I am waiting for further victories.” (10)

Auliya used to accept large gifts sent by Sultan Alauddin from the spoils plundered in jehad expeditions and proudly displayed those at his khanqah (lodge).

The Ganga-Jumna syncretism that low IQ seculars talk about happened only in their dreams. By the mid-13th century when Nizamuddin Auliya settled in Delhi, the seat of Islamic power in India, Sufism had been purged of its mystical and tolerant aspects. Influenced by the unorthodox, controversial doctrines and practices of the famous Arab-Spanish Sufi ideologue Ibn Arabi (d. 1240), Auliya always put the ulema (clergy) as supreme in religious matters. To the question of whether dancing and playing of musical instruments, as had been adopted by Sufi dervishes, were permissible, he said, “What is forbidden by Law (Sharia) is not acceptable.”

On the question of whether the controversial Sufi devotional practices were permissible or not, he said, ‘‘Concerning this controversy at present, whatever the judge (orthodox Ulema) decrees will be upheld.” The Sufis of India had no contradiction with the ulema; both had a common goal – the interest of Islam, but to be achieved through different methods. Auliya used to say, “What the Ulema seeks to achieve through speech, we achieve by our behavior.”  (11)

Amir Khasrau (1253–1325), Shaykh Nizamuddin Auliya’s exalted disciple, is lauded as the greatest liberal Sufi poet of medieval India. Auliya gave him the title of Turkullah (The Turk or Soldier of God). Regarded as one of India’s greatest Muslim poets, he is credited with being a great contributor to Indian classical music and the creator of qawwali (Sufi devotional music). There is little doubt about Amir Khasrau’s achievements in music and poetry, but according to historian M.A. Khan, “When it came to the fallen infidels and their religion, his bigoted Islamic zeal was very much evident. In describing Muslim victories against the Hindu kings, he mocks their religious traditions such as tree and stone-idol worship. (12)

Mocking the stone-idols destroyed by Muslim warriors, he wrote: “Praise be to God for his exaltation of the religion of Muhammad. It is not to be doubted that stones are worshipped by the Gabrs (derogatory slang for idolaters), but as stones did no service to them, they only bore to heaven the futility of that worship.” (13)

Amir Khasrau showed delight in describing the barbaric slaughter of Hindu captives by Muslim warriors. Describing Khizr Khan’s order to massacre 30,000 Hindus in the conquest of Chittor in 1303, he gloated: “Praise be to God! That he so ordered the massacre of all chiefs of Hind out of the pale of Islam, by his infidel-smiting swords… in the name of this Khalifa of God, that heterodoxy has no rights (in India).” (14)

He took poetic delight in describing Malik Kafur’s destruction of a famous Hindu temple in South India and the grisly slaughter of the Hindus and their priests therein. In describing the slaughter, he wrote, “…the heads of Brahmans and idolaters danced from their necks and fell to the ground at their feet, and blood flowed in torrents.” (15)

About the miserable subjugation of Hindus and the barbarous triumph of Islam in India, he wrote: “The whole country, by means of the sword of our holy warriors, has become like a forest denuded of its thorns by fire? Islam is triumphant, idolatry is subdued. Had not the Law granted exemption from death by the payment of poll-tax, the very name of Hind, root and branch, would have been extinguished (16).

Amir Khasrau described many instances of barbaric cruelty, often of catastrophic proportions, inflicted by Muslim conquerors upon the Hindus. Nowhere did he show any sign of grief or remorse, only gloating delight. While describing those acts of barbarism, he invariably expressed gratitude to Allah and glory to Muhammad for enabling the Muslim warriors achieve those glorious feats (17).

Another disciple, Nasiruddin Mahmud Chirag-Dehlavi (1274–1337), purged and purified deviant aspects of the Sufi practices. According to professor K.A. Nizami, he prohibited all deviant (from Sharia) rituals and practices that had entered the Sufi community, saying, ‘‘Whatever Allah and his prophet have ordered, do it, and whatever Allah and his prophet have forbidden you against, you should not do.’’ Nizami adds: “He brought Sufi institution in harmony with Sunnah. Wherever there was a slightest clash, he proclaimed the supremacy of the Sharia Laws.” (18)

It is clear that as against the original spiritual mission of Sufism, the cult was primarily introduced in India for the spread of Islam with a view to help the Muslim rulers for political domination. According to Arshad Javed Rizvi of the Sir Syed University of Engineering & Technology, Karachi, “By and large the spiritual successors of mystic Islamic saints enjoyed the royal favor of Muslim rulers and gave moral support to the Muslim invaders. They also guided the state in political affairs with their experience of regular interaction with the common people.” (19)

The Tablighi Jamaat is also a cult which pretends to be peaceful while its real agenda is jehad. In view of the radical DNA of their muse Nizamuddin Auliya, the increasing radicalisation of the Jamaat’s rank and file is only to be expected. It is now a driving force of Islamic extremism and a major recruiting agency for terrorist causes worldwide. For a majority of young Muslim extremists, joining the movement is often the first step on the road to extremism. Perhaps 80 percent of the Islamist extremists in France come from Tablighi ranks, prompting French intelligence officers to call it the “antechamber of fundamentalism”. (20)

Across the western border, the movement has gained a strong foothold in the echelons of power. According to the Islamabad-based Pak Institute for Peace Studies, “The Tablighi Jamaat has, undoubtedly, penetrated deep into South Asian Muslim societies, impressing people from all walks of life including rulers, civil and military bureaucracy, businessmen, sportsmen and even members of the showbiz community.” (21)

If not cut down to size, it won’t be long before the various branches of the Tablighi Jamaat in India, Pakistan and Bangladesh are emboldened to link up to make a grab for the big prize – the Islamic conquest of India.
==========