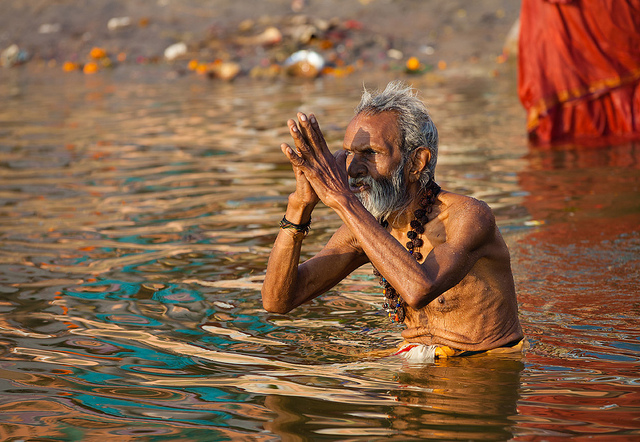 Hindus across the world believe that Prime Minister Narendra Modi will be able to clean the Ganga. Since the time of announcement of project Clean Ganges, many countries have offered their help to the Indian government. Some of the countries are Israel, Australia and England. Their offer for help reminds me of the following two points:

1. It was this smallpox outbreak in England which was probably responsible for the deaths of the Indian natives in American colonies as well. First introduced into Mexico by the Spanish conquistadors, Mexico’s indigenous population fell from 25 million to 1.6 million. Similar fates fell upon the Indians of Eastern North America when the English colonists introduced smallpox to the native Indians. (Armies of Pestilence: The Impact of disease on History by R S Bray)

2. U.S. Marine Corps Major General, Smedley Butler, the most active military officer in the Banana Wars and winner of two Medals of Honor wrote in his book War is a Racket:

I spent 33 years and four months in active military service and during that period I spent most of my time as a high class muscle man for Big Business, for Wall Street and the bankers. In short, I was a racketeer, a gangster for capitalism. I helped make Mexico and especially Tampico safe for American oil interests in 1914. I helped make Haiti and Cuba a decent place for the National City Bank boys to collect revenues in. I helped in the raping of half a dozen Central American republics for the benefit of Wall Street. I helped purify Nicaragua for the International Banking House of Brown Brothers in 1902-1912. I brought light to the Dominican Republic for the American sugar interests in 1916. I helped make Honduras right for the American fruit companies in 1903. In China in 1927 I helped see to it that Standard Oil went on its way unmolested.

Wars are not only fought with bullets & bombs but by different means and all wars fought are not for territory. Modern day wars are fought in a camouflaged way and more often than not, for economic reasons.

Ganga is not only holy but is also the economic lifeline for more than half of India. The Ganges basin is one of the most fertile regions for agriculture in the world and supports India’s food requirement in a massive way. The holy river also supports several types of water species (more than 140 fish species, 90 amphibian species and the endangered Ganges river dolphin) as well as flora and fauna.

Cleaning up the Ganga will involve several types of activites involving machinery to chemical usage, impacting physical forms to environmental aspects. And here is where one needs to be cautious.

So, how are these points relevant to the cleaning of the Ganga? Let’s look at the following:

1. Salvinia are of serious concern among paddy cultivators in the state of Kerala. Salvinia made its entry in India before 1900 and now more than 0.2 million hectares of water bodies are affected by it. In addition to the problems caused to the farming community, the weed can choke waterbodies and serve as ideal breeding grounds for mosquitoes. Eichornia, popularly known as water hyacinth, was introduced as an ornamental pond plant from the Amazon Basin; now it has become a menace in the backwaters.

2. Parthenium weed, or “Congress grass”, is a relatively recent immigrant into India. It was not included in the review of alien weeds by Biswas (1934). Since the arrival of P. hysterophorus from the New World in the 1950s, it has spread throughout most of the Indian subcontinent, and is now considered to be the principal terrestrial weed in India. As well as being a highly aggressive weed in a range of crops and urban situations, P. hysterophorus is toxic to livestock and causes allergenic responses, such as respiratory malfunctions and dermatitis, in susceptible humans. (Major Indian Weeds of Neotropical Origin and the Possibilities for Collaborative Biocontrol Projects by Harry C Evans)

3. Agricultural scientists from ten states have embarked on a hunt to trace and isolate five harmful “invasive weeds” which made their way into the country through wheat imports. The UPA Government had imported nearly 63 lakh metric tonnes of wheat in 2006-07 from Russia, Australia, Canada, Hungary, Europe, France, Argentina, Romania, Netherlands, Kazakhstan, and Bulgaria in which nearly 25 types of weed seeds were found.  The alien weed, Ambrosia Trifida could affect human health as it was suspected to contain allergic pollen. Agriculture experts say that it was essential to control and check the spread of such invasive weeds as they push native species to the verge of extinction and drastically reduce the yield of economic species and agriculture crops. (Indian Express, September 2009)

4. Native fish fauna of Indian rivers gets yet another threat to their existence. According to researchers from India’s premier wildlife research body, Wildlife Institute of India (WII), a new ferocious predator fish has entered the Godavari River basin in Andhra Pradesh. Red-bellied Piranha (Pygocentrus nattereri), a known invasive species, was never reported from river systems in India before. Native to Brazil, Red-bellied Piranhas are usually found in the Amazon and other coastal rivers, interconnected wetlands and canals of Brazil. Often, when a predatory invasive species is introduced, it wipes away the native species, either by predation or through competition for food resources.

According to a study published in 2011 on non-native fish species in India, not less than 324 alien fish species have been introduced in India, mainly as ornamental fishes for aquariums, for cultivation and for killing mosquito larvae. However, many of them have turned invasive and destructive to the existence of native fish fauna. (http://indianbiodiversitytalk.blogspot.in)

5. A group of researchers has reported the presence of Acacia dealbata – an invasive alien plant – from the interior of the high altitude, protected area of Kedarnath wildlife sanctuary in Uttarakhand. No one has a clue on how this plant reached an altitude of 2200 from the mean sea level. The plant is already declared as an invasive species in the Indian Himalayan region, while it is reported as a problem species in Portugal, Spain, New Zealand, France and Italy where it is found to be replacing native plant species and taking a high toll on the biodiversity of indigenous plants. They are also found to increase water loss in riparian zones and thus gradually change the ecological nature of the area. (http://indianbiodiversitytalk.blogspot.in)

The aforementioned instances are just a very tiny sample and not an exhaustive list. There is no proof that these invasive species have been introduced intentionally but there is no reason to disbelieve it (at least some of them would have been introduced intentionally) either. This is in light of the long recorded history of how Small Pox and banana war were introduced, as mentioned in the beginning of this article.

So am I opposing the Ganga cleaning?  Absolutely not. I am all for it. The point I am trying to make here is that India needs a serious central policy on how to manage invasive species. The Clean Ganga project will impact the maximum people and it is the right time to evolve and implement such a considered policy. Otherwise it can have dangerous, disastrous, and unpredictable impact in the long term. In the name of cleaning, we might unwittingly add more problems.

Most countries in the world take the threat of invasive species seriously, and this begins right in the flight where alien passengers are asked to fill out immigration forms declaring whether they have been to X, Y, or Z country, whether they’re carrying food/grain/natural produce containing this or that substance. I am sure we all remember that Harbhajan Singh and Virender Sehwag were hit with 200 NZ (100 US) dollar instant fines by New Zealand’s Ministry of Agriculture for arriving in the country with dirty shoes in 2002. New Zealand, one of the world’s leading agricultural exporters, is particularly sensitive to bio security.

It is estimated that out of about 45000 species of plants recorded from India, nearly 1800 are alien and out of the known 54430 arthropods (including insects), nearly 1100 are alien. Thus invasive species have become an environmental issue of concern. And aquatic weeds cause more problems.

It is time India also takes a serious look and invests manpower and resources into studying invasive species.