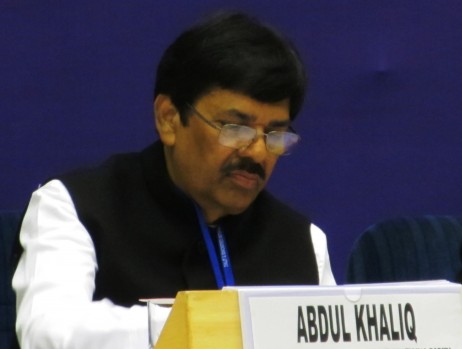 As a senior journalist, I usually keep away from responding directly to the essays or articles written by politicians because they are often just that — political and biased.

However, as a citizen of India who swears by this country’s pluralism, I feel compelled to confront the many assertions that you have made in your piece in The Indian Express. In this piece, you narrate why according to you there is unprecedented ‘hatred’ against Muslims in India. At breakneck speed, you gush out a sense of fear at ‘the mind numbing environment of hostility and prejudice’ that Indian Muslims supposedly face.

When I read your article, for a moment I stepped back and wondered why you would have written such a piece, and what someone reading it outside India would imagine about our country from your essay. I was disheartened to realise that for anyone reading your essay outside India, it sounds like Muslims are being tortured and murdered every day in India. You make the Indian Muslim — whose population has held steady consistently in all these 67 years, while minority populations almost everywhere else in South Asia have been annihilated — sound like they share the fate of the Yazidis in Iraq of the Ahmadis or Shias in Pakistan (notice, I am not even getting into the fate of the Hindus, Christians or Sikhs). This to me is unfair, unjust and denies what this country — your country and mine — has achieved in all these years through much tumult.

Imagine for a moment, Mr Khaliq, that you were a non-Muslim resident of Pakistan or Bangladesh (notice I am not even bringing the Middle East into the picture) — tell me, sir, what then would be the chances of an essay like yours about the majority Muslim population of those countries of being published as a front page anchor of a major national newspaper — and if it did, what do you think would be the reaction? Do please check the fate of Shahbaz Bhatti, a Christian man who I have personally met in Pakistan and who used to be the minorities minister of that country, and you will get your answer.

When you contemplate these things, you will know why some are led to believe (I don’t) that there is no place for non-Muslims in a place where there are a large number of Muslims. I’ll tell you where that comes from — it comes from (again, I assert, I personally don’t think so) observing the South Asian experience in countries other than India and which are also predominantly Muslim. But you might, correctly, at this point say that but those are different countries, no matter how culturally similar to India — to this, allow me to point out that even today the acceptance of the idea of the return of the beleaguered Kashmiri Pandits to the Valley is a non-starter because of the hatred against this Hindu community who were driven out of their homes on the threat of death. This is not old history, Mr Khaliq, this is a 2014 reality as we realised with the backlash against Hindu religious yatras this year in Kashmir — on this subject I urge you to read this.The journalist Rahul Pandita makes an interesting point about this. He writes about the separatist Syed Ali Shah Geelani that Mr Geelani uses ‘environment’ as a ‘metonym’ to tell the Hindus ‘you are not welcome here’.

You know where else this fear comes from? It comes from my home state of Bengal where in border village after border village, Jamaat mullahs who have infiltrated from Bangladesh do not allow the Indian flag to go up. Surely after all that we now know about the Trinamool Congress Member of Parliament — a former member of the banned fundamentalist Islamic organisation, SIMI, no less — and his transfer of funds (via an ambulance, they say) to the dangerously radical Jamaat-e-Islami in Bangladesh, you wouldn’t deny that there is a problem there? You may also be aware that confirmation on such terror activity is coming from the Bangladeshi government themselves who have prepared a dossier on how this MP helped shift money from the Saradha scam to Jamaat terrorists.

Come on, Mr Khaliq, and then you say people are worried?! You bet they are. As an Indian citizen, and senior Indian politician, aren’t you? (By the way, as an aside, Mr Khaliq, when the Bahujan Samaj Party Member of Parliament walked out as the National Song was played, did you worry about the insult to Parliament, the first among equal institutions of our democracy?)

You talk of the ‘inexorable growth of distrust and hatred for the Muslims and all that he presents’. (It is curious that the Muslim identity to you is only male, but that is another story). You say ‘the plight of the ordinary Muslim is getting progressively worse’. You say ‘the miasma of distrust, of hate, of prejudice hangs like a black cloud over the community’.

Let me, then, tell you what is really a ‘black cloud’. It is the appearance of the black flag of ISIS in Kashmir and Kerala as beheadings, mass murder and gang rape continue unabated across the Middle East as the Islamic State seeks to create a new caliphate. What is a black cloud is that the Indian Sunni theologian Maulana Salman Nadvi of the Darul Uloom Nadwatul Ulama greeting Abu Bakr al-Baghdadi (surely I won’t have to tell you who that is?) and then, in a letter asking the Saudi Arabian government for money to raise a 500,000-strong Indian Sunni Muslim army to fight Shia Muslims across the world. That, as a senior Indian politician from the Muslim community, is disturbing, because these, Mr Khaliq, are the real black clouds. And they are hovering right above you.

You say the prime minister saying that Al Qaeda would not succeed in India — surely you too would be worried by the declaration of Al Qaeda to ‘launch’ in India — because Indian Muslims are patriotic was ‘deeply disturbing’. This is odd for several reasons. First, you do know that this is a routine answer to a routine question, don’t you? Manmohan Singh, as prime minister, said the same thing in 2008. Then, think about this. Say you were prime minister — which you can hope to be in India, Mr Khaliq.

Unlike in our neighbouring countries where there is little chance that someone from a different faith than the majority religion could ever be a senior politician like you, Indian Muslims have regularly reached the top of government, as you well know. Even as I write this we have a Muslim vice president. So say you were prime minister, and you were asked on an international TV interview what you thought of the Al Qaeda statement, what would you say? Tell me, what is a prime minister supposed to say to this except vigorously assert that he was convinced that every Indian is a patriot? What would you do in his place? What would be your answer? Cleverly, you tell us that you think the prime minister’s answer was wrong, but you don’t tell what you think it ought to have been.

Allow me one final example of how tolerant India is — even an intolerant Islamic preacher like Zakir Naik who is dubbed intolerant, no not by me, but by Javed Anand, is still allowed to practice merrily in India. Now surely you don’t think Javed Anand, who heads the magazine Communalism Combat, is communal, do you?

Now let me tell you why you wrote this essay Mr Khaliq. You wrote this purely for your personal political gain. You and your party are worried by the results of the Bihar by-election. You believe that the Muslim vote is once again moving towards Lalu Yadav and Nitish Kumar — especially now that they are together. You are worried that your alliance with the BJP, which essentially saved your party from oblivion by its victory in May, might hurt you in the Bihar state elections. You are suddenly feeling unsure. Now that at least the seat of your leader and his family and hanger-ons have been saved by the Modi victory in May, you are trying to start a different game to see what you can get in the state elections. Can you play the Muslim card and squeeze the BJP? Can you wave the secular flag and snatch away some benefits from Lalu and Nitish? And who knows, if such a day arrives, when you, yes you personally, see more gain in ‘joining secular forces’, this kind of publicity can only help.

But as you pursue your short-term goals, remember Mr Khaliq that you are playing a dated game. After 67 years, this game has run its course. I am not saying you might not still be able to squeeze out a benefit or two — but in the long run, even for your career, and your party, this is ornamentation, an iftar party for show, a skull cap wearing for the cameras. And that, Mr Khaliq, you would appreciate, no longer brings votes.

(This piece was originally published in Medium. Reproduced with the author’s permission.)