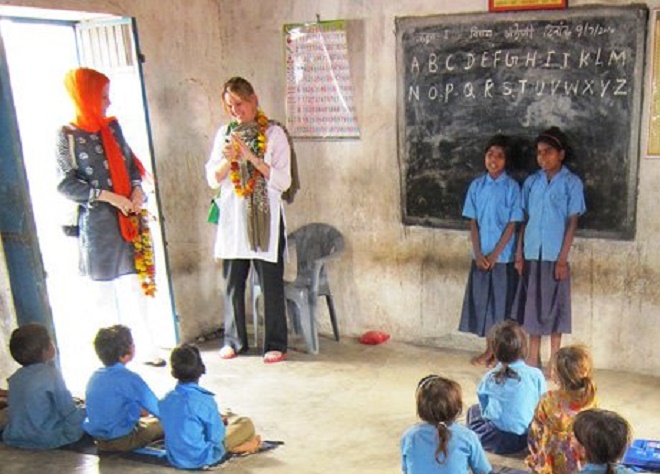 India is witnessing a disparity in education between the haves and the have-notes, between the 20 percent, who study in English medium private schools and the 80 percent, who study in vernacular government schools. Some educationists propose that this disparity should be bridged by introducing English in the government schools right from nursery to bring the education standards on par for all children.

I am amazed at this proposal. How can some Indians want more colonization instead of getting rid of the remnants? Why would the Indians want to hold on to that colonial language baggage that was burdened on them in 1835 on the suggestion of Thomas Macauley? Don’t they know that the intention was to make the ‘natives’ lose pride in their clearly superior culture and make them mental slaves of the British, without them actually realizing that they were made into slaves?

Well, amazing as it is, many of the Indian elite actually want an ‘English India’. It feels natural to them. They feel more at home in English than in their mother tongue because of their education in English medium. And so far, they were even allowed to feel superior to the masses, who don’t speak this ‘world language’. Without being spelt out, the fact is that those fluent in English with the right accent form the topmost class in Indian society. This fact does not prevent many of them from castigating “the Brahmins” as those who unfairly ‘oppress’ others.

However, at present a churning is taking place that is shaking this privileged position. There is a certain resurgence of an Indian identity, and tradition and language are major aspects of it. The Prime Minister taking his oath of office in Hindi and several MPs in Sanskrit, would have put the English speaking elite ill at ease. Maybe the attack on Smirti Irani as HRD minister was not so much because of her missing academic credential, but because of her fluency in Hindi. Those who are fluent only in English may fear that she does not share their conviction that English medium is a must for higher education.

The English speaking class naturally has an interest to continue with the status quo, where jobs at the top level require fluency in English, whether it is in the judiciary, the defense forces, in academia, science or administration. It is in their interest and in the interest of their children.

As they lack good arguments in favor of English medium education, they use different methods. One is ridiculing those who speak bad English. I saw comments which read “Before posting first learn proper English”. If you tell this to a German, he may just ask back “Why should I?” But if you tell this to a Frenchman, beware! Yet Indians keep quiet and may even take it to heart.

Another method is to obfuscate the language issue. India has a huge advantage, because her population speaks English, they claim. But two points are not made clear:

First point: only a small percentage of Indians actually speak English – only about 15 percent know English and only a few lakh (0.05 per cent) speak it fluently as primary language.

Second point: it is not easy to learn a foreign language, which one doesn’t hear spoken in one’s daily life, but only for a few hours in school. It is of course easy, if you hear it spoken from childhood at home.

I could directly observe this: In 2006, in the span of a few months, six babies were born in my surrounding – three of them to acquaintances who speak English at home and three to servants. All six of them are now in English medium schools. Meanwhile, the disparity is huge. The children of the former are at ease in English and ‘good’ in school, the others struggle, in spite of being sent for tuition, which is a burden for their parents. The disparity is not in their level of intelligence. All of them are bright and full of zest. In fact, the children of the servants seem to have grown up faster. They are highly observant, don’t throw tantrums, when they don’t get what they want and are better behaved towards elders.

Nobody says that children should not learn English. But why demand from teenagers’ fluency to write essays, understand thick textbooks, and the question papers in their exams? They need to learn the basics, like students in other countries do. Why burden them so young with tomes in an alien language? This happens in no developed country, only in a few former colonies, including India.

English medium in education has an advantage only for those few who want to study abroad, and is easy only for those who hear English at home. They are at present greatly privileged, but are a miniscule minority.

In the last decade, strangely, the craze for English medium schools has accelerated, and it may have been intentional. Government schools kept being in the news for poor results, and forthwith, even those, who did not know any English started sending their children to the mushrooming small private English medium schools. It became a business opportunity for some entrepreneurs and a prestige issue for parents, who hardly could afford the school fee.

Friends, who had established primary schools in over 20 villages in the Himalayan foothills, closed them down some years ago. In tune with the times, parents had pressured them to change them to English medium. My friends took a principled stand and did not comply. The children landed up in dubious English medium schools.

No authority counseled the parents that it was a big blunder, as their children will be neither good in English nor in their mother tongue. They are unlikely to break through the glass ceiling that separates them from the haves. In fact, they would be much better off if they went to a Gurukul like Baba Ramdev did, obtain knowledge that truly matters, develop body, mind, and spirit and discover the purpose of their lives.

Baba Ramdev made me realize how odd it is to continue with English in India. He himself had escaped English education and the slave mentality that often comes with it and certainly is not the worse for it. There are few people who are as knowledgeable, energetic and successful in transforming their vision into reality, as he is. He is connected to his roots via Sanskrit, and can see the damage that the British have inflicted on India. Many months ago, during his talks across the country, he kept thundering: “French study in French, Germans in German, Japanese in Japanese. Why do Indians study in English?” I realized only then how shockingly disadvantaged Indian children are. I wondered what would have happened, if my parents had sent me to a (luckily non-existing) English medium school. It would surely have been a disaster, even though English is not as different from German as it is from Indian languages.

It happens occasionally that children from a non-English background get into prestigious higher education. The super 30 of Bihar who crack the IIT admission test are an example. But they could have honed their outstanding talent for math even better, if they had not first to overcome this huge language hurdle.

An NRI from US tested the intelligence of Indian and American children via sign based IQ tests. Village children in India outperformed their city counterparts in India and in the US. In one village over 30 per cent scored over 90th percentile! An extraordinary result! Yet once these children aim at higher education, they lose confidence, all because they are not good in English.

A government school teacher told me that some of her students were drop outs from English medium schools. They were now flowering in Hindi medium. “Here, they can be natural, have fun. Whereas in English medium they were always timid” she said. “Worst off”, she added, “are poor kids that are admitted to expensive schools under the RTE Act. They clearly wither away as they feel inferior.”

The push for more English medium schools in recent years and the proposal to introduce it even in the government schools is difficult to understand. Those planning the education policies would know that English medium for children from non-English background is too tough. The disparity can’t be removed in this way. It can be removed by giving them, books and question papers in their mother tongue even for higher studies.

The parents from poorer sections think that they do the best for their children, as they learn now the same as the children of ‘big people’. They don’t realize how it stifles their development. They also don’t realize how much useless stuff is written in those fancy textbooks.

Apart from making the children timid, being forced to speak English in school dilutes their Indian identity. Could this have actually been the objective – to make the children lose their identity at a time, when many realize that India stands tall among the nations? This assumption is hopefully out of place. Yet watching discussions on English channels, one gets the impression that many panelists would wish for a fast westernization of India. Those panelists, however clearly do not represent the masses.

Can India, almost seven decades after independence, finally make a gradual transition to teaching all, including higher education in the respective mother tongue and teach Sanskrit and English as obligatory languages and others optional? Europe with over 20 states and over 20 languages is in a similar position like India. There, each child is taught in his mother tongues right till university level. India could adopt this model. (An interesting slide show by Sankrant Sanu can be viewed under: http://www.bhashaneeti.org/ )

India is more cohesive than the European Union. The underlying unity in her diversity is her common heritage. And this heritage is India’s strength. As much as the English speaking left liberals may deny it, Sanskrit, Ramayana, Mahabharata and Vedic philosophy unites India even today. It would be foolish to further dilute this glue by promoting an “English India”, while the west discovers the value of Sanskrit and Indian philosophy and teaches it in their schools and universities.

The article is being reproduced from author’s blog with her permission.