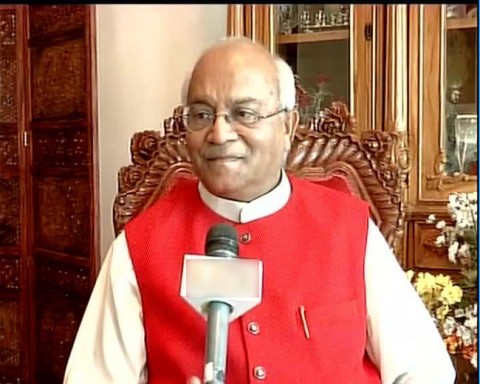 A lot is being said and written on the meeting between Mr. Ved Pratap Vaidik and Hafiz Saeed, head of a terrorist organization named Jama’at-ud-Da’wah. Hafiz Saeed also has close links with Lashkar-e-Taiba and is a wanted terrorist by several nations including India and the United States. His name figures in the major terror attacks against India in the last decade including the 2001 attack on India’s Parliament, the 2006 Mumbai train bombings and the deadly attacks of 26/11, again in Mumbai.

Vaidik is a journalist with decades of experience in the field . He knows exactly what the implications of meeting a declared enemy of state are. And so his so-called “defence” comes a cropper. Whatever his intent was, that meeting was simply not done. Neither can he hide behind a facade that he was “naive.”

So what could be the purpose of his meeting with a terrorist ?

Investigative journalism? A lot of courageous journalists all over the world have arranged interviews with the most virulent criminals, political rebels, and terrorists. The most famous was the one Daniel Pearl had with the Taliban only to end up getting his throat cut.

But then no journalist goes for a “meeting” with someone like Hafiz Saeed unless the meeting is sanctioned by the state concerned. And if Vaidik indeed conducted an interview, where is the recording or at least a textual transcript?

By his own admission , Vaidik says he went there on a whim when he was challenged by local Pakistani journalists. In which case, it only confirms that it was a meeting, not an interview.

Is an Indian national allowed to have a “meeting” with a declared enemy of state, and that on a whim? It also cannot be ruled out that Vaidik’s action has serious legal and security implications.

There are two other very significant implications of this incident on the politics of our neighbourhood.

First is the legitimacy such ‘meetings’ grant to terrorism as a means of state policy. Here is the Government of India sending dossiers upon dossiers to establish the link between Saeed and 26/11, and here comes ‘ Mr. Know it all ‘  Ved Pratap Vaidik who decides to go and meet the very man whose name figures in those dossiers!  With this one act, Vaidik has reduced our Government to a laughing stock in the international arena.

Does this act not dilute the efforts of the Indian state towards nabbing Saeed who the US too, after years of reluctance has declared a terrorist?

Does it not send an extremely wrong signal to India’s law enforcement agencies that continue to work round the clock to nab this terrorist?

Does this not give philosophical justification to his crimes when an Indian citizen attempts to ‘understand ‘ a wanton terrorist’s “viewpoint?”

This also exposes the moral bankruptcy, if not perversity of Vaidik . Sadly, even Baba Ramdev has tried to justify Vaidik’s thoughtlessness as attempting ‘ Hriday Parivartan’ (change of heart) of this terrorist.

It might appeal to a misplaced moral grandstanding to approach a terrorist and attempt to change his heart, but did it occur to Vaidik what message he would be sending out to those who lost their loved ones on 26/11  and similar attacks?

Indeed, would Vaidik have gone ahead and met Hafiz Saeed had one of his near ones been slaughtered in Mumbai on that tragic day?

It is intellectual dishonesty of the highest order to sit on the ashes of fellow countrymen and attempt to reform a terrorist . But such “thinking” seems to be order of the day where it has become very easy for self-appointed moralists because someone else has paid the price for their moral grandstanding.

Indeed, the Government needs to deeply ponder over these questions and prevent “free agents” like Vaidik who want to indulge in this sort of dangerous adventurism. To have a ‘casual meeting’ with a Jehadi whose stated position is “to break India into pieces” is nothing but an act of treason and Vaidik must be tried for that.

We are still paying the price for shooting ourselves in the foot in the Samjhauta Express blasts investigation. We can ill afford to let this issue be diluted, lest we grant even a minuscule of legitimacy to Hafiz Saeed.  He is a terrorist and must be treated as one, else the nation will pay a very heavy price for letting him off the hook.

And so, to prevent even a remote possibility of that happening, Vaidik’s case must be made an example of in the strictest manner allowable by law.