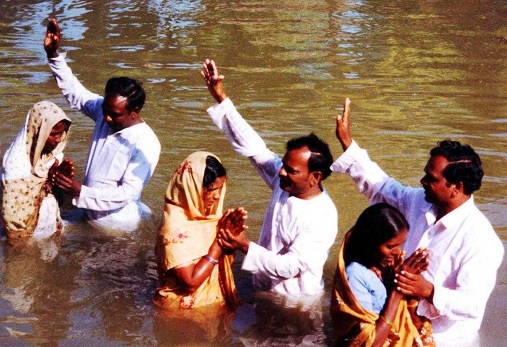 IndiaFacts carried several factual and original exposes in 2014 focusing on the rampant foreign-aided proselytization which marked the lost decade between 2004—2014. These original investigations exposed the Global Evangelical Organizations and their nexus with franchisee NGOs in India.

Given our visibility and reach, it is natural to ask if our stories made any impact. The first point is this: yes, of course, our stories revealed much that was barely known to Indians—even those who track evangelical activities regularly. However, more importantly, our stories have caused these Organizations to try and erase their tracks. Here are a few instances of the same.

16 March, 2014: A Missionary Deception Named Veil of Tears was published on 16 March 2014. Veil of Tears was a documentary movie produced by the multi-national evangelical behemoth, Gospel for Asia as part of its portfolio of atrocity literature against Hinduism and India.

21 April, 2014: Evangelist Modus Operandi in India: A Report caused much uproar among the readers and supporters of IndiaFacts. Through four Exhibits, it showcased the surreptitious and Adharmic activities of foreign-supported Evangelicals in India.

Impact-1: Exhibit-2 of that story featured Mike Amick Jr. who was the President of International Paper India, and who was shown to be proselytizing in the homes of Lingayats in the Northern Karnataka region during weekends. The story was based on an article in a Baptist magazine which included a video. Furthermore, it was based on a lecture delivered by Mr. Amick as a Plenary Speaker in an Evangelical networking conference held in Tennessee during March 21-22, 2014.

Impact-2: Exhibit-4 of that story featured a video where a Sepoy, Avia Ngwazah was seen talking to his handler (Allan Witkowski) from an Evangelical Organization called Team Expansion. The video is likely to have been filmed in Arunachal Pradesh.

21 July 2014: Evangelical NGO Operation Mobilisation’s Foreign Funding introduced a new analysis to the audience of IndiaFacts. For the first time, the potential of reverse analysis of FCRA data was demonstrated—that is, given the name of a foreign organization, can one obtain the network of its recipients in India?

Operation Mobilisation is once again an Organization (a hydra, in fact) which falls under the broad category of Breaking India.

Impact: The Indian arm located in Ranga Reddy District, Telengana used to be called Operation Mobilisation India on FCRA records. After our story was published, its name has been changed to Operation Mercy India Foundation.

7 September, 2014: Gospel for Asia and Its Indian Connections followed the same methodology as outlined in the Operation Mobilisation story and identified the flow of Evangelical Funds from Gospel for Asia Inc(GFAI), Texas. A key element uncovered in that story was the establishment of 13 Limited Liability Companies(LLCs) in Texas by GFAI, through which enormous sums of money were channelised to its franchisee FCRA-NGOs in Kerala for the purpose of converting Hindus to Christianity.

Impact: The mailing address of all the 13 LLCs on the website of Texas Comptroller of Public Accounts used to be 1800, Golden Trail CT, Carrollton, Texas 75010-4649 (which is the address of GFAI). After the story was published on IndiaFacts, the addresses of all the LLCs on the Texas Govt. website have been changed to 116, St. Thomas Way, Wills Point, Texas 75169.

18-21 October, 2014: IndiaFacts Investigation: The Many Faces of Mission India was a three-Part story which can be read here, here and http://www.indiafacts.co.in/indiafacts-investigation-mission-india-funded-ngos-india/.

The stories used a simple methodology:

(iii) the Company Master Data of Ministry of Consumer Affairs, Government of India.

Sequencing all these together, it was established that Mission India, an Evangelical Organization based out of Michigan, was not only financing two FCRA-NGOs inRanga Reddy District, Telengana—that is, Seva Bharat and Letha Charitable Trust—via FCRA, but had also established a company therein called DTK Hospitality Tours Pvt. Ltd which acted as a shell for the FCRA-NGOs to operate from.

This IndiaFacts story provided the first smoking gun that foreign evangelical organizations support the work of the Kingdom of the Christian God via the company route as well (for more information, read theBusiness as Mission model).

Impact-1: The Advisory Board of Christian Social Forum, Secunderabad (cited in our Story as Ref. 6) used to show Rev. J. Chiranjeevi as General Director, Seva Bharat. His name was deleted sometime in November 2014 after the IndiaFacts story appeared.

Impact-2: The Board of Directors of Hyderabad Institute of Theology and Apologetics (HITHA) (cited in our Story as Ref. 10) used to show Dr. Kamala Chiranjeevi as Director, SevaBharath (IndiaFacts Note: Typo in NGO name reproduced for the sake of accuracy). Her name was deleted, again, sometime in November 2014 after the IndiaFacts story appeared. Strangely, while some other Board members whose names were also removed are shown under “Former Members of HITHA Board”, Dr. Kamala Chiranjeevi’s name went missing even under this list.

Impact-3: A video of an Annual celebration of a Telugu Evangelical channel, Aradhana TV was available on youtube. At 1m50s, Rev. J. Chiranjeevi’s name was called to occupy his seat on the dias. The same was mentioned in our story. This video has been made private after our story broke.

Impact-4: Mission India’s (Michigan) webpage used to list David Bustraan (one of the Directors of DTK Hospitality Tours Pvt. Ltd.) as a contact for receiving gifts on its behalf. The same was mentioned in our Story. His name alone went missing from that webpage sometime in November after our story.

Impact-5: On the Ministry of Consumer Affairs database, DTK Hospitality Tours Pvt. Ltd. was listed to have had only three Directors – all foreign nationals. After our Story broke, a fourth name, who happens to be an Indian national, was added. This IndiaFacts Impact was covered here as a separate impact story.

Needless to state, IndiaFacts will continue to track and expose such missionary and evangelical shenanigans that have the potential to alter India’s social fabric and pose serious threat to national security. We leave it to our readers to figure out the reason(s) behind such webpage cleanups, director-level changes etc.

IndiaFacts carried several stories on Proselytizing Organizations this year. These were based on publicly verifiable evidences. Despite the attempts to erase/modify some of these evidences, our stories remain. We remain true to our cause – of bringing outfacts and featuring investigations and exposes that mainstream media shies away from.

(With inputs from IndiaFacts supporter, reader, and contributor, Shiva Kumaran who can be followed on Twitter @sighbaboo).