How does it feel to be burnt alive? 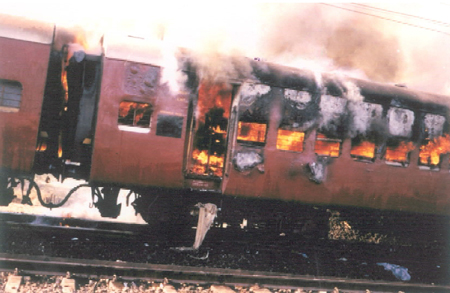 How does it feel to be burnt alive? I don’t know. But my guess is that first the skin will burn, followed by the muscles and then the bones. Surely, no one will survive by the time the bones start burning. At some point, the water in the body will boil and evaporate, after all the human body is made of 70% water. The body will shrink as the water evaporates. However, these are just chemical reactions.

Physically, the person will be trying to save himself, but at some point of time will fall on the ground. He will cry in unimaginable pain. I don’t know whether there will be any sound left in his voice? Will he feel helpless? What will be his thoughts? Will he think about his family, the near and the dear ones? His dreams, his aspirations maybe? Will someone remember him, his death or his pain?

To experience burning, just touch the steel kettle with boiling water; or if you are still adventurous, put your hand inside the boiling water. There are other easier options to experience this, like placing your palm on top of the flame of a cigarette lighter or a candle.

You must be wondering, why am I discussing this in the season of elections and cricket? Well, because in this nation we push all the pains under the cover of cricket and pretend as if nothing is wrong. However there is so much hidden inside the cricket that it can’t hide anything anymore. In this elections, it is important to talk about these issues openly.

The current election has two themes. ‘Narendra Modi’ talking about ‘Development’; and the ‘rest’ about ‘communalism’. And of course, communalism for the ‘rest’ starts from post-Godhra. While in reality it started from Godhra. In Godhra, only 60 children, women and old Hindus returning from pilgrimage from the birth place of Lord Rama, were burnt alive in the train.

Death by burning is probably one of the most gruesome forms of killing. It has been a part of the Christian and the Islamic society since time immemorial. For more visit: http://en.wikipedia.org/wiki/Death_by_burning

What is surprising is that the deaths of the Hindus by burning them alive, doesn’t raise any eyebrows. In India, the gruesome killing of only 60 children, women and the elderly by burning them alive has never been a part of the national discourse. However, Godhra is not a unique case.

There is a parallel to it.

On the night of January 8, 1993, in Radhabai Chawl, Mumbai, nine people including six women and three men, of whom two were minors, were locked in a room doused with kerosene and then set on fire. Five of them died on the spot. One of the victims was a physically handicapped girl. One died later in a hospital. The two minors and a woman survived though they sustaining disfiguring burns. The Supreme Court freed all the 11 accused, setting aside a TADA court conviction. The court observed that the police had framed the 11 Muslims and “somehow tried to get them identified through witnesses who belonged to the community from which the people were burnt alive”. As the families of the accused celebrated the judicial intervention that has brought joy back to their lives, no one talked about the Bane family which perished in the incident.

We have a case of parallax too.

The Best Bakery case in Vadodara in which 14 people were killed, was one of the two cases related to the 2002 riots that was shifted outside Gujarat after the intervention of the Supreme Court.

A day after the bakery was burnt down by a mob, the owner’s 18-year-old daughter Zaheera Sheikh lodged a police complaint against 21 accused. In June 2003, a fast track court acquitted all the accused citing lack of evidence as key witnesses, including Sheikh turned hostile. After the Gujarat HC upheld the verdict in December, the apex court termed the acquittal as “miscarriage of justice”. A reinvestigation was ordered and then a retrial took place moving the case to Maharashtra, saying proper justice would not happen in Gujarat. After the reinvestigation, the trial court in Mumbai convicted nine of the 21 accused and sentenced them to life term.

Courts, have their own criteria to convict or acquit the accused, both in accordance with the spirit and letter of the law.

But, the parallel and the parallax create a paradox in the mind. Paradox of how the killing of Hindus by burning them alive, never becomes a part of the national discourse among the Hindus in India.

I am a Hindu and I tried keeping my palm on the candle flame, it…..