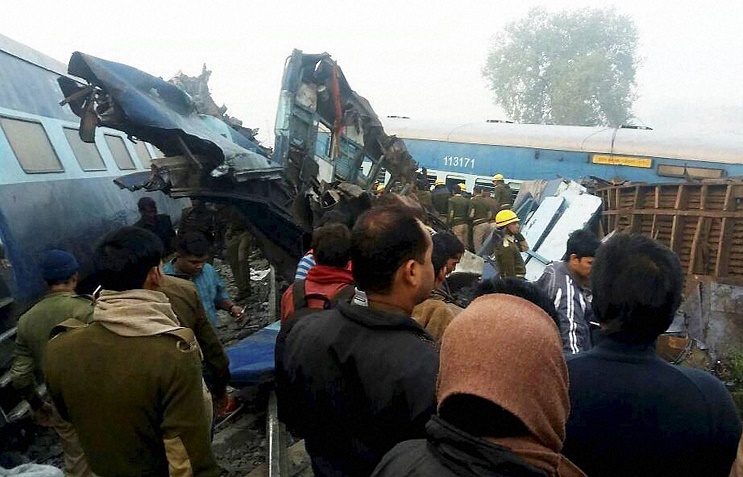 The role of the Pakistani Military’s Inter-Services Intelligence (ISI) is being suspected in a series of recent train mishaps, especially since the Indore-Patna Express train tragedy near Kanpur on November 20 in which about 150 lives were lost. The National Investigating Agency (NIA) is also investigating the ISI’s involvement in these incidents. While the most likely cause of these train incidents seems to be the poor upkeep of rail tracks, the ISI has indeed been active throughout India in the recent decades. Scores of Indian nationals, mostly non-Muslims, were arrested from towns across India for their role as an ISI agent in recent years. These arrests revealed the involvement of ex-military officers, terror suspects, army clerks, criminals and others.

Over the past decade and more, the cities and towns from where the ISI agents were arrested included Ahmedabad, Jaisalmer, Jodhpur, Jaipur, Mumbai, Delhi, Mohali, Amritsar, Chandigarh, Patiala, Jalandhar, Shimla, Aligarh, Meerut, Kanpur, Lucknow, Gorakhpur, Patna, Kolkata, Darjeeling, Agartala, Hyderabad, Bhopal, Bengaluru, Chennai, and so on. The names of these cities crop up when you search the websites of Indian newspapers. The ISI agents active in India are mainly of two types: those engaged in gathering secret information of military nature, and those involved in recruiting and planning terror modules. However, some are also involved in sabotage activities and in flooding the country with fake currency notes.

In his book “Pakistan’s ISI: Network of Terror in India,” senior cop S.K. Ghosh examined the revelations of the arrested ISI agents and noted that the ISI’s strategy involved the following: Use Kashmiri Muslims and cause subversion and terrorism across India, prepare an extensive ISI network and plant cadre of terrorists and spies in every part of India, trigger serial blasts in major cities, create insurgencies in parts of India where Muslim population is significant, and create newer fronts in Pakistan’s proxy war against India. Speaking of the 1993 Mumbai serial blasts, Ghosh observed that these were “not a Hindu-Muslim problem” but “an India-Pakistan problem.”

The ISI is supposed to be Pakistan’s external intelligence, which it is, but it also functions as a domestic intelligence agency. Its role in creating, nurturing and sheltering jihadi organisations is known as well as its role in creating political parties, spying on Pakistani politicians and pressuring the civilian governments. In 2014, the mass protests led by Imran Khan and the Barelvi cleric Maulana Tahirul Qadri against the elected government of Nawaz Sharif were planned by Lt.-Gen. Shuja Pasha, the former chief of ISI. In the external domain, the ISI has exercised total control on Pakistan’s foreign policies involving India, Afghanistan and the U.S. At least since the 1980s, the ISI has used its jihadi organisations in Afghanistan and right since 1947 against India in Kashmir. ISI specialises in proxy wars. Recently, former ISI chief Lt.-Gen. Zaheerul Islam said: “The only successful proxy war against the communist USSR was won by Pakistan Army and ISI.”

The following jihadi organisations work as part of the ISI’s network: the Afghan Taliban, who have their headquarters in Quetta; the Lashkar-e-Taiba, which is also known as Jamaatud Dawa and has its headquarters in Muridke near Lahore; Bahawalpur-based Jaish-e-Muhammad is headed by Maulana Masood Azhar, who was released by India in exchange for the passengers of the Indian plane hijacked to Kandahar in 1999; Ahle Sunnat Wal Jamaat, which is also known as Lashkar-e-Jhangvi and is known for systematically killing Shias because it thinks Shias are not Muslims. Also, the ISI creates groups of terrorists, trains them and regularly sends them into Jammu & Kashmir to fight against Indian security forces.

Walter Joseph Cawthorne, the Australian-born British army officer, is considered as the founding father of the ISI. He served as the head of ISI from January to June 1948 and went on to become the deputy chief of Pakistan Army from 1948 to 1951. In his book “Faith, Unity, Discipline – The ISI of Pakistan,” German author Hein G. Kiessling notes that Pakistani historians cite the British intelligence service MI6 “as the blueprint for the ISI, partly because the first training and equipment assistance came from MI6 and from the CIA.” Since Pakistan was carved out of India and in enmity against India, it was the logical next-step for the ISI to target India. The ISI and the CIA cooperated during the 1950s and 1960s, especially after U.S. pilot Francis Powers was shot down in the USSR on 1 May 1960, having taken off in a spy plane from Peshawar.

During the 1971 Bangladesh war, Kiessling notes, “The CIA and ISI also cooperated in working against the Indira Gandhi government after she signed an agreement with Moscow on 7 August 1971 confirming peace, friendship and cooperation between India and the Soviet Union.” Kiessling adds: “During the 1960s, it was involved in the support of local militant groups in north-east India, and from the mid-1970s, it also helped insurgent Sikhs in Indian Punjab.” This Sikh radicalisation and militancy in Punjab was crushed by senior police officer K.P.S. Gill during the 1980s. In Burma’s Arakan region from where Rohingya Muslim refugees are nowadays coming to settle in parts of India including in Jammu, the ISI had been active right from the early days of Pakistan, which included East Pakistan, now known as Bangladesh. Mizo insurgent leader Laldenga and his supporters, as per Kiessling’s book, had gone to Arakan from where the ISI had taken them to Karachi sometime in the early 1970s.

Since Pakistan considers India its eternal enemy, the ISI is engaged in an eternal and enduring struggle against India. A number of terror attacks in Kashmir and other parts of India in recent decades, including those carried out by the Indian Mujahideen, were planned and executed by the ISI. It is unreasonable to expect that India’s intelligence agencies will always know everything that the ISI does in India, though they do work at their best. However, their work goes largely unnoticed because it involves prevention of ISI’s anti-India designs. The new generation of Indian youths might not be aware of the ISI’s large network across the country, but it must be stressed that the ISI is much more active in cities and towns across the country than can be publicly perceived. Indian youths must keep this in mind: an aware citizen is the always best defence for India.