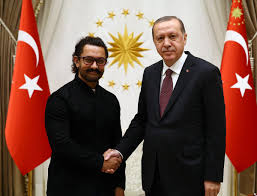 The traitor-like submissive salam, or ‘Sajda’, made by India’s fundamentalist film actor, Aamir Khan in Turkey recently showing obeisance to Recep Tayyip Erdogan and his Begum has created multiple shock waves among somnolent Hindus of India. Erdogan has emerged as the new global leader of militancy after converting Hagia Sophia church into a mosque. He is a rabid India-hater and had aggressively criticized the abolition of Article 370 from the Indian Constitution and re-constitute the State of Jammu & Kashmir into three Union Territories of the Indian Union.

It is time to realize that Aamir Khan is not the only Bollywood actor to hobnob with India’s enemies, fifth columnists and traitors. There are too many Aamir Khans sauntering across the length and breadth of India. An abnormally large number of them have been operating through Bollywood which is a 6.7-billion-dollar booming business empire (approximately a huge wealth storehouse worth Rs. fifty lakh crores), stupidly funded and supported by Bollywood-charmed Hindus who cannot distinguish between the chaff and the grain. The Bolly-charmed Hindu audiences have not been able to identify, nor count the fifth columnists and traitors ruling over the goldmine of India’s film industry which has been remote-controlled by Dawood Ibrahim for more than five decades now. A powerful underworld mafia comprising mostly Muslim operators like Haji Mastan and Yusuf Patel has been the leading lights of Bollywood! It is alleged that no film actor, actress or producer can succeed in Bollywood without the support and blessings of Dawood Ibrahim. Can we count Aamir Khan and others of his tribe as outstanding examples of Dawood’s patronage? Aamir could not have become a member of the Rupees one hundred crore Bollyclub without the support of infamous gangster Dawood who played merry hell in 1993 with Bombay (now Mumbai). Well, your guess is as good as mine.

Unfortunately, we Hindus, have a poor sense of history and suffer from Stockholm Syndrome due to 1200 years-long history of slavery which is perhaps a world record!

Due to subtle machinations of hundreds of Erdogan-worshipping Aamir Khans, India has become a major spy-infested country, full of pro-Pakistani operators and fifth columnists. Aamir Khan prostrating before Erdogan and his Begum has deep strategic implications for the future of Bharat. According to an assessment made nearly two decades ago by Sundeep Waslekar’s Strategic Foresight Group, when L K Advani was the Deputy Prime Minister and Home Minister of India, he had tried to estimate the number of Pakistani spies in India. After the estimated count exceeded 10,000 spies, he foreclosed the exercise allegedly on the advice of his speechwriter and close confidant, rumoured to be Sudheendra Kulkarni. So said the Raisina Hill rumour. The real reason for abandoning the project midstream, however, would be known only to Advani.

According to a reliable source in one of India’s premier Intelligence agencies presently there could be 40,000 to 50,000 ISI agents operating in our country. Many of them have managed to ensconce themselves in Bollywood, some have entered the mainstream media and created multiple Thought Forums, often managed by self-professed and self-promoted Hindu intellectuals.

Interestingly Bollywood has become a formidable outpost of jihadi mafia rampaging across India. There are far too many Aamir Khans in Bollywood. And they are supported by chuheys planted across India by the ISI of Pakistan

Aamir Khans of Bollywood do not try to conceal their contempt for the Hindu identity of India. Everyone knows that Aamir Khan did it with a vengeance in his film PK by spewing contempt on Hindu beliefs and deities. In many of his movies, he has been highly critical of various flaws in the Hindu society.

Surprisingly, Aamir Khan and other fundamentalist operators of his ilk never try to highlight the serious flaws in Muslim orthopraxy, nor the venom spewed against Kaffir Hindus in Islamic scriptures. No Aamir Khan dare speak up against grossly inhuman practices like Halala, Female Genital Mutilation or Triple Talaq. They dare not admit that the ‘doctrine of instilling terror into the hearts of Kaffirs (read Hindus, Jews, Christians, et al) expressly elucidated in the Holy Quran (e.g., Ayats 8.39 and 2.39) constitute founts of Islamic intolerance towards all other religions and civilizations. Any opposition to such abominable religious practices approved by Islamic scriptures would lead to Aamir Khans of India facing a morbid confrontation with Mullahs and Imams – even invite threats of beheading them!

Interestingly in the year 2015 when a phoney debate on the intolerance of Hindus was going on, Aamir Khan announced that he was alarmed by the incidents of violence in the country and growing intolerance and talked about his desire of moving out of India – albeit deceptively claiming that the suggestion was made by his wife, Kiran Rao!3  But he did not and dare not migrate. Why? Simple reason. Where else can he amass so much money by fooling Hindu filmi folks!

Despite his claim to having imbibed considerable knowledge for his success in the film world and professing to be an admirer of Dr. B.R. Ambedkar, Aamir Khan remains ignorant about the strident criticism and contempt heaped on Islam by Baba Sahib Ambedkar in his singularly well-researched book, ‘Pakistan or Partition of India’. That shows how hollow is his wonky knowledge.

Who else but dimwit Hindus of India will allow him to make tons of money and simultaneously hobnob with Islamic fundamentalists like Recep Tayyip Erdogan who has been in the forefront of the Muslim leaders opposing abrogation of Article 370 of Indian Constitution which was a temporary addition to the Indian Constitution.

In the strategic best seller book, The Siege, authored by Adrian Levy and Cathy Scott exposing the plotters of the November 2008 attack on Mumbai it has been highlighted that an ISI operator, Major Iqbal, had boasted that Pakistan had planted a ‘Honey Bee’ and several retinues of mice (chuhey) operating all over India1 It is a pity till date the Indian intelligence agencies have not cared to trace and capture the elusive ‘Honey Bee’, nor the retinues of mice. Could it be that Aamir Khans of India are among the mice planted in India by the ISI?

The multiple gangs of Aamir Khans pose a major threat to the unity and integrity of India. Pakistani spy nests manned by Aamir Khans have substantially subverted India by using a double-barreled cylinder of petro-dollars rolled through the Sheikhdoms of Gulf and some leading lights of Bollywood.

The same darknet lobby of fifth columnists was seen in action when Ishrat Jahan, a Lashkar operator, was killed in June 2015 during an encounter on the outskirts of Ahmedabad. A similar lobby led by some pesky musketeers, mostly secularism infected Hindus went into an overdrive vociferously seeking clemency for Afzal Guru, the kingpin of the gross Jihadi attack on Indian Parliament in December 2001. Aamir Khans of India were again at the forefront during rallies held in several Indian cities during the visit of the then U. S. President George Bush.

Erdogan’s Aamir Khan and many others of his ilk had vigorously tried to block the hanging of Yakub Memon, brother of Tiger Memon who was a notorious accomplice of Dawood Ibrahim in staging Mumbai bomb blasts of 1993. But after the rejection of his Mercy Petition by the then President of India, Pranab Mukherjee, he was hanged in Nagpur Jail on July 30, 2015. Remarkably the punishment could be meted out to the Jihadi terrorist only after a long legal battle waged by multiple Aamir Khans running amuck across India. Among whom many are secularitis-infested leading Hindu lawyers!

Time has come for the Indian government to launch a multi-pronged attack on the tribe of fast multiplying Aamir Khans, both within and without Bollywood. The long-delayed action must not be postponed anymore. Equally imperative is the need for waking up the Hindu audience about the threat posed by Aamir Khans of India.