If India had Sharia law, Tharoor would have become Tahir! 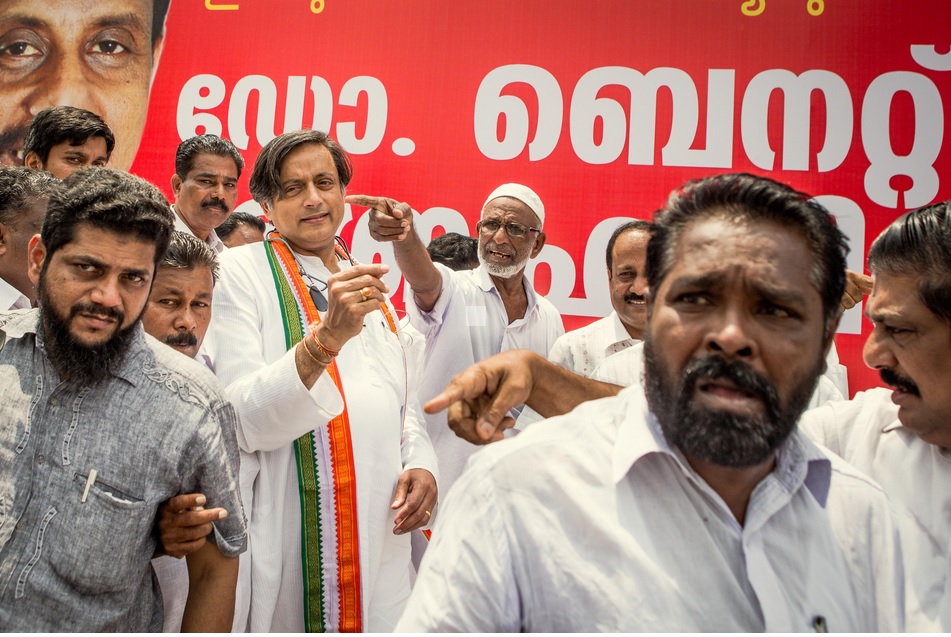 The Congress campaign for Lok Sabha has begun. As always, unfounded lies are being propagated. The latest is – India will become Hindu Pakistan if BJP comes to power again.

The person who made this statement, Congress leader Shashi Tharoor, is himself under lens for the suspicious death of his wife. Congress has a peculiar habit – with about a year left before any election, they attempt to create some kind of fear in people. If you vote for BJP, Muslims will have to migrate to Pakistan. They go to the extent to claim that Hindus will finish them off. To quote an example, P Chidambaram’s coinage of the term Saffron Terror. In order to put fear into Muslims, P Chidambaram coined the term Saffron Terror in 2010. But recently, Rahul Gandhi claimed that they had never used that ever.

Shashi Tharoor should know that digging into Oxford Dictionary and picking words from it to blurt his English is not same as speaking about his country and Dharma. English as a language is different from religion. Let it be clear to Shashi Tharoor that the probability of BJP coming to power and making India a Hindu Pakistan is zero. Rather if Congress were to come to power – Hindus in India would be reduced to the same state as Hindus in Pakistan who are continuously persecuted and tortured.

It is not my intention to reply in the same vein that Shashi Tharoor plays with words, not even to impress the Hindu so that they applaud me. Shashi Tharoor has indulged in wanton loose talk, with no basis or reference to the laws, scripture, Vedas or shastras of Hindus.

However based on their support for implementation of Sharia Laws, we can conclude that if Congress comes to power, fate of Hindus would be like that of those in Pakistan

Ignorant Shashi Tharoor has no clue about Islam. Probably he is too busy with his wife’s murder case and not found any time to learn about the Islamic or Sharia laws. Let us educate him on the Sharia laws instead of asking him to read up on it. There are three divisions of the world according to Sharia laws – Dar-Al-Islam, Dar-Al-Harab and Dar-al-Sulh

Dar-Al-Islam is where Muslims are in complete majority and where Islamic laws (Sharia) is in practice. Example: Pakistan and other Islamic Countries. In those countries, if there are people of other faiths, they will be converted, killed or driven out of the country. There are no bars on this in Islam. The ultimate objective of Jihad is to make the orld Dar-Al-Islam. Robert Spencers “Islam Unveiled” says this

“Jihad whose objective is to increase territories of Dar-Al-Islam at the cost of Dar-Al-Harab, is not a traditional war that begins at one stage and ends at another. Jihad is a perpetual war, that endorses any kind of deceptive truces for current political situations (mudahana) and excludes the concept of peace”

What does Dar-Al-Harab mean? It is the stage of Islam system as seen in India. Dar-Al-Harab means abode or realms of war. The territories under Dar-Al-Harab does not practice Sharia laws. Muslims as a minority will demand authority/power, rights, masjids and they will keep raising their voices until they get the necessary authority and rights. Once that is achieved, they attempt to establish Dar-Al-Islam. In a nutshell, to chase Hindus and people of other religions away, convert them or worst case, kill them

This has happened in India already. You can recollect what happened when Kashmir became Muslim dominant. Lakhs of Kashmiri Pandits were driven out of Kashmir or killed. Malappuram has Muslim majority. There is an unwritten law in this place. If a Muslim has to sell a shop or a house, they have to sell it to another Muslim and not to a Hindu. You can independently verify this claim.

Mamta Bannerjee’s Government in West Bengal has been allowing infiltration of Bangladeshis and Rohingyas. Pelting of stones on Goddess Kali worship is one of the impacts of this unchecked admission. Yes! These regions are almost nearing Dar-Al-Islam.

India was partitioned based on religion. Despite this, Muslims who continued here, instead of following our Constitution and the laws, continue to make demands like in Dar-Al-Harab, and now are asking for Sharia courts. Congress is supporting this demand and is standing by those Muslims demanding it. Without Sharia there are regions that are Muslim Dominated where Dar-Al-Islam is in practice. Imagine the situation of India if Sharia is allowed.

The next realm or division of world as per Sharia is Dar-Al-Sulh. Even in this, Sharia will not be applicable, but the united majority would not interfere with Muslims and keep out of their way. In fact, they wouldn’t even care for their existence. In this situation, Muslims are advised to integrate and stay reconciled. They will not even place any demands. Example for this is Australia. Despite a 2.2% population, no Muslim would dare to demand Sharia in public. They lead a life of peaceful coexistence with the majority Christians.

What is the intention behind Congress supporting the Sharia law in the country? Shashi Tharoor will not realize the damage from Sharia law and even if known wouldn’t acknowledge. In 2020, or post Lok Sabha elections, or if some Muslim is affected by the order of a Sharia court and starts raising his voice, Rahul Gandhi will be the first person to disown just like what he did regarding the Saffron Terror. He will wash his hands off feigning ignorance.

Efforts are already underway to bring in Sharia. Despite no official Sharia, Kashmir, West Bengal, Kerala, Tamil Nadu, and Andhra are good examples of what could happen. If it is officially allowed, I have serious fear that even Shashi Tharoor may become Sheikh Abdullah. When Shashi Tharoor with a live bomb in his vest, supports Sharia and says India would end up becoming a Hindu Pakistan, even Sunanda Pushkar’s soul may have a hearty laugh.

Keeping all these aside, it is nearing end of Modi’s term of 5 years. How many terror attacks have happened from Pakistan? How many Hindus, Muslims and Christians have been converted? Can Shashi Tharoor provide the data? Lying is a sin according to Islam. When the bottoms are on fire, they are allowed to lie. It has sanction from Mohammed. This is called Taqqiya. We can give it to you in writing, Shashi Tharoor can never find these things against Hindus.

What is even more shocking is the silence of foolish Hindus, despite being aware that attempts are being made to bring Sharia in India. While they have fallen for the crocodile tears of Kumaraswamy, where is the question of India becoming Hindu Pakistan? Hindus are not so brave. Forget it.

What happened is just this – they needed traction for their Lok Sabha Campaign, while Dr Subramanian Swamy going after Shashi Tharoor legally. Recently, the court has accorded permission to interrogate Shashi Tharoor in his wife Sunanda Pushkar’s murder case. When Modi government returns, the fear that the truth will definitely come out has rattled Shashi Tharoor and making him blabber. Had India sharia law like in Islamic countries, we would have read the classified column where Shashi Tharoor would not be Shashi Tharoor but Shafi Tahir. It is Shashi Tharoor who is insecure, not the Muslims.