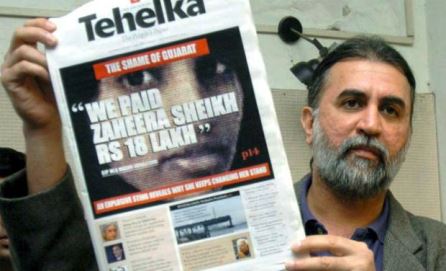 Poet and secularist par excellence Javed Akhtar was hauled over the coals by Twitterati for his comment on former Tehelka editor-in-chief Tarun Tejpal which was seen as supporting the beleaguered editor. But what has escaped the notice of the mainstream and social media is much more insidious. In a debate at Times Now, he tried to distinguish two sets of people who are slamming Tejpal: the liberal, progressive people—people like us (PLU)—who take up causes like diversity, environment, and women empowerment; and then there are the politically incorrect hypocrites—people like them (PLT)—who uphold regressive values and are likely to vote for the Bharatiya Janata Party. In short, only the enlightened souls like Javed Akhtar, Vinod Mehta, and Vinod Sharma are entitled to express their anguish and dismay at the Tejpal affair; their revulsion is authentic, that of PLTs is just deceitful.

And I thought all along that sympathy, empathy, and compassion are noble feelings every human being possesses or is capable of possessing in some measure. As Adam Smith wrote in The Theory of Moral Sentiments, howsoever selfish a man may be, “there are evidently some principles in his nature, which interest him in the fortune of others, and render their happiness necessary to him, though he derives nothing from it except the pleasure of seeing it.” Men and women of any race, creed, color, or country, and belonging of any ideological persuasion, feel anger when they see somebody wronged and they are pained when they find a person in pain. So, it was not unnatural for the middle class, BJP leaders, and others to sympathize with the brave young girl who was (allegedly?) sexually assaulted and castigate Tejpal.

But the climate of opinion, that the Tejpals and the Akhtars have polluted, has subverted all that is time-honoured and reasonable. Therefore, nobody has a right to feel disgusted by depravity unless they unquestioningly follow the accepted canons of public discourse; nor do they have the right to sympathize with a victim of sexual assault. Only Left-libbers have such rights. Worse, anybody outside the incestuous coterie of professional radicals and bleeding heart activists lambasting Tejpal and showing compassion for the victim is immediately dubbed as a hypocrite and an adversary.

It is true that BJP leaders like Arun Jaitley and Meenakshi Lekhi have not concealed their glee at the woes of Tejpal and the discomfiture of the politically correct grandees who surround him. But that is neither unnatural nor hypocritical. Tejpal’s success was built on his various tirades against the BJP; concomitantly, he ignored or downplayed the misdeeds of the Congress-led United Progressive Alliance (UPA) in the last nine years; not for him the multiple billion-dollar scams, the mishandling of economic policy, the grievous neglect of national defence and internal security, the shameful pandering to the most regressive sections in the Muslim community, and the foreign policy flip-flops for which the Sonia Gandhi regime is responsible.

Tejpal has been called the Congress “doormat.” That may have been the use of extreme language, but his proximity to the top bosses of the ruling party is well-documented. In 2004, after coming to power, Sonia Gandhi had urged (read ordered) Prime Minister Manmohan Singh to favorably mold the pending probe against Tehelka. In an “open letter” to Sonia after the UPA was reelected in 2009, Tejpal wrote: “You have given us of yourself, and of your son. Now will you kindly also give unto us your luminous daughter?”

Rahul Gandhi, according to Tejpal, was no less luminous: “He has humility, decorum, diligence, and he takes the long and inclusive view. We do not like the idea of dynasty, but we abhor the idea of divisiveness more. In an ideal world we would do away with everything feudal and undemocratic, but for the moment let us concentrate on getting rid of the engines of hatred” (emphasis added). One need not be a Vinod Mehta to know that “the engines of hatred” are the BJP, PLT, etc.

That is the crux of the matter, and this is where the pathologies of PLU and the interests of the grand old party converge: Tehelka is the most conspicuous sangam of fellow travelers and the ancient regime. And since pinkish intellectuals and the popes and bishops of the unholy Nehruvian empire—some would prefer to call it the unholy Roman empire—lord over the perverted public discourse in India, they think that they reserve the right to describe what is compassion and what is not. PLU have captured and colonized the centres of opinion making; they should not be allowed to colonize morality and humanity. Otherwise, they would pronounce most of mankind as less than human.