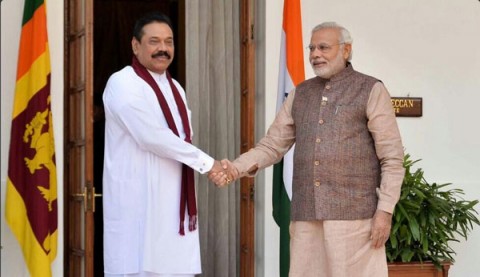 New Delhi’s foreign policy towards Sri Lanka so far has been characterized by oscillation and inconsistency. It had been unduly defined by Tamil Nadu in the 1980s and is now being increasingly influenced by hazy notions of South Asian integration and “Hindu Buddhist unity”, the latter fuelled by ill-informed sections of the RSS. The latter benefits Colombo. Indian foreign policy should instead by defined by a clearly spelled out geo-strategic interests alone.

Subramanian Swamy, Seshadri  Chari, Suresh Prabhu, Swapan Das Gupta and Madhav Nalapat had traveled to Colombo last week. One Sunimal Fernando, Special Adviser to the President of Sri Lanka for the Promotion of English and the head of the Bandaranaike Center for International Studies, had invited and organized their schedule. Sunimal Fernando had likewise organized the invitation to Ram Madhav Varanasi to Sri Lanka. The latter’s travel to Colombo commences today.

Sunimal Fernando is purportedly keen to facilitate “Hindu-Buddhist unity”, whatever that means. A few words on  him will therefore be pertinent. He is an Anglican Christian, i.e. one baptized into the Church of England. His family is a well-known Anglican Christian family in Sri Lanka that counts Jeronis de Soysa, baptized in the 1820s, Charles Henry De Soysa (1836 to 1890), Sir James Peiris (1856 to 1930), and Sir Hilarian Marcus Fernando (1864 to 1936). Both Sir James Peiris and Sir Marcus Fernando had at different times opposed the Tamil Hindu leadership of Sir Ponnambalam Ramanathan and Sir Ponnambalam Arunachalam.

It’s ironic therefore that President Percy Mahendra Rajapakse (Mahinda in short) has appointed Sunimal Fernando to be his interlocutor with the RSS and to push the issue of Hindu Buddhist unity. This only demonstrates that Rajapakse is not serious. The administration, not the RSS, is best positioned to address the needs of Sri Lanka’s Hindu population. This latest move is evidently a self-serving ploy to conceal Sri Lanka’s surreptitious and deliberate drift into China’s orbit with a sole view to expose India’s southern flank to Chinese threat. India already shares a long and disputed border with China on its northern flank.

Since sections of the RSS evidently view the Rajapakse administration as a Buddhist one, a few words to expose the nature of the Sinhalese state would be relevant.

Every head of Government in Sri Lanka has either been a baptized Christian or has had a Christian as an immediate next of kin, Mahinda included. The list includes Don Stephen Senanayake, independent Ceylon’s first Prime Minister, his son Dudley Senanayake, his successor John Kotelawala, Solomon West Ridgeway Dias Bandaranaike, a baptized Anglican who spearheaded the alleged Buddhist revival, his wife Sirimavo Dias Bandaranaike, his daughter Chandrika Bandaranaike Kumaratunge, and last but not the least, Percy Mahendra Rajapakse.

Mahinda Rajapakse’s wife is Christian. A reference to Mahinda’s inner circle may be relevant here. His closest confidantes undoubtedly belong to his immediate and extended family. His brother Gotabhaya is indeed a Buddhist with authentic credentials. http://en.wikipedia.org/wiki/Rajapaksa_family

There is also Lalith Weeratunge, Secretary to the President, Nivard Cabraal, Governor of the Central Bank, and Peter Mohan Maitree Peiris, Chief Justice of the Supreme Court. Lalith Weeratunge is Buddhist. The other two are Sinhalese Christian.

Mahinda had relied on Rajiva Wijesinhe, ex-Secretary General for the Secretariat for Coordinating the Peace Process, Dayan Jayatilleka, former Ambassador to France and then the United Nations (Geneva), Tamara Manimekalai Kunanayakam, former Ambassador to Cuba, the Vatican and the United Nations, and Rohan Gunaratna, International Terrorism Expert, to neutralize the overseas LTTE lobby. Interestingly all four are Christian.

I mention all this not to attack individuals for being Christian. Each person is entitled to his or her religion. I recount these details only to question the alleged Buddhist motivations of the current regime.

The Pope is due in Sri Lanka in January on the repeated invitation of Mahinda Rajapakse. This will be the Pope’s first trip to Asia. He travels to the Tamil-dominated Northern Province to conduct Mass on January 14, 2015, the first ever by the head of the Roman Catholic church in the Tamil part of Sri Lanka, courtesy the President.

The RSS better note this before it gets befuddled with notions of “Hindu-Buddhist unity” mediated by Sinhalese Christians. It sure looks ill-informed and needs to tread with caution. It’s more important that the issue of defence and foreign policy be left to the Prime Minister’s office and to South Block. A self-styled ‘Track Two’ diplomacy of this nature is not in India’s interest at this stage. And it’s certainly not in the interest of Sri Lanka’s 15% Hindu population either who have been hemmed in by the Sri Lankan state and a Christian-supported secular Tamil nationalism that has only brought destruction and mayhem.

(The author is a retired scholar and expert on Indo-Sri Lankan affairs and comparative religions).