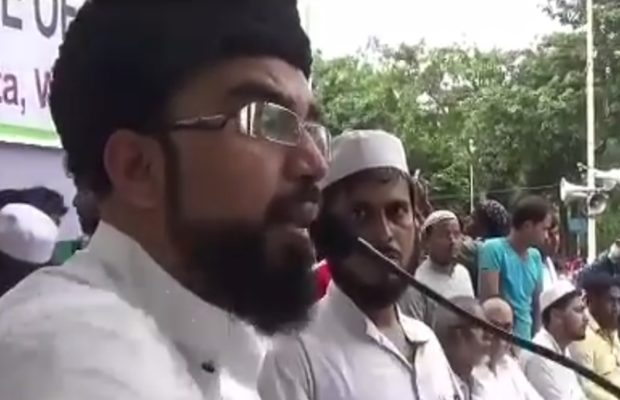 The Ministry of Home Affairs, in its affidavit in the apex court, has asserted that the issue of Rohingyas fell under the exclusive domain of policy decision of the executive. It categorically stated that the “fundamental right to settle in any part of the country was available only to citizens and not the refugees”.

But the central government’s submission to the Supreme Court declaring the Rohingya refugees as ‘illegal’ has not gone down well with the Muslim clergy in India. Scores of vociferous protests, rallies and processions were taken out in several states to denounce the government’s stance on the Rohingya Muslims. Only in Kolkata on September 12, over 18 Muslim organisations took to the streets to protest against India’s deportation plan regarding the 40,000 Rohingya living in India. According to NDTV’s news report, at least 25,000 to 35,000 protesters marched from Park Circus to Rani Rashmoni Road and paralysed the traffic. The slogans and posters lambasted not only Myanmar’s de-facto leader, Aung San Suu Kyi as strongly as Prime Minister Narendra Modi for not raising the issue of the Rohingya Muslims in his recent visit to Myanmar.

But these marches turned a grave matter of concern when the religio-politicians and fanatic Islamic clerics appeared to fan the flame of communal bigotry through their nefarious hate speeches. While they accused the central government of violating the fundamental rights of refugees, some of them went to the extent of spewing religious venom. They sought to exploit the Rohingya crisis to further their virulent communal motives, much in the same way as they previously did in several other cases.

Deplorably for the Indian Muslims, a noted Islamic cleric in Kolkata Maulana Shabbir Ali Azad has made a hate speech in the mega rally which has created havoc across the country. He has threatened to overthrow the central government and cause a wanton ‘bloodshed’, if the Indian government initiates the process of deporting Rohingyas. Provoking the communal sentiments in his confrontational speech, Maulana averred:

“If the Muslims are in minority, are we weak? You don’t know the history of the Muslims. We are Hussaini Muslims, even if we are 72 we can kill lakhs”.

He continued: “This is our memorandum to the Delhi government that Rohingyas are our brothers. Don’t think that the Rohingya Muslims are different from the Muslims of India. We all Muslims are brothers. Don’t try to evacuate the Rohingya Muslims from Bengal. This is Bengal, not Assam, Gujarat, Uttar Pradesh, Muzaffarnagar or Muzaffarpur”, as is clearly evidenced in this video:

Now, compare this communal outburst of the Kolkata-based cleric with this violent jihadist war-cry in Kashmir: “There will be wanton killing and bloodshed if 8,000 Rohingyas in Jammu are deported”. This is what Zakir Musa, the Kashmiri militant and former commander of the Hizb-ul-Mujahideen, who now heads another terror outfit in Kashmir, Ansar Ghazwat-ul-Hind, warned in his recent video. No wonder that Musa’s call to arms for the Islamist fundamentalism is now reverberating in Kolkata.

But if we delve deeper into these jihadist calls in India in the wake of the Rohingya crisis, we find somewhere down the line, that they emanate from the theology underpinned by the Pakistani jihadist clerics. The first call for the ‘Rohingya jihad’ came from the terror ideologue, Maulana Masood Azhar, chief of the terrorist organisation, Jaish-e-Muhammad. His radical Islamist rhetoric on the Rohingya plight was published in his weekly magazine, Al-Qalam as an editorial titled in Urdu “Betab Burma” (i.e. restless Burmese Muslims).

The Pakistani jihadist ideologue threatened the ‘oppressive’ Myanmar government to prepare for “the thudding sound of the footsteps of its conquerors”. He avers that “the country will be soon deprived of peace and tranquility”….. “The global Muslim community (ummah) is feeling the pain of the Muslim nation……” “It is because of the sacrifices of the Myanmar Muslims that the ummah is waking up and we are seeing this new awakening among the Muslims of the world…..” “All of us must do whatever we can for the Myanmar Muslims. Just say your prayers, and get up to help them. You don’t need to show off what you are doing: just do it, and never stop.”

Remarkably, the jihadist war-cry for the Rohingya Muslims has been raised at a time when an overwhelming number of Indian Muslim are showing profound compassion and concern for their co-religionists fleeing what they call the ‘Muslim genocide’ in Myanmar. Clearly, this is a brazen attempt to channelize the humanitarian crisis to further the nefarious ends of the political Islamism and particularly to recruit the jihadists fighting for Pakistan in the name of Islam.

Many Muslim clerics in India came to the fore to ‘intensify’ the community resilience against the persecution of the Rohingya Muslims fleeing the ensuing violence and ethnic cleansing in Myanmar. Both Sunni and Shia Islamic clerics have vociferously voiced their deep concerns for the Muslim minority in Myanmar as their ‘co-religionist brethren’. While issuing an ultimatum to the Indian government, Kolkata’s Maulana Shabbir Ali Azad has also stated that Rohingyas are “our brothers” and that “we all Muslims (everywhere in the world) are brothers”. But regrettably, the self-imposed Muslim clergy leadership in India does not speak out now when the Kolkata-based Muslim cleric has threatened bloodshed over the Rohingya deportation plan of the Indian government. Neither they muster courage to candidly expose and rebuff the jihadist motives of the terror outfits like the Jaish-e-Muhammad behind their calls for the Rohingyas.

For instance—Jama’at-e-Islami Hind’s leader, Maulana Syed Jalaluddin Umari, demanded the Indian government to “pressurize the Burmese government to stop killing their own countrymen, restore their citizenship, remove all restrictions on their travel and focus on their social and economic upliftment”, as the Jama’at’s online organ, India Tomorrow, reported. Correspondingly, the clergy of Jamiat Ulama-e-Hind asked the Indian government to comply by the developed nations, including the European Union in meting out a humanitarian treatment with refugees. “India must not deport the Rohingya Muslims seeking asylum in India”, they said, as The Times of India reported. AIUMB’s founder-president Syed Mohammad Ashraf Kichhauchwi stated that Indian govt. should extend its helping hand to the Rohingya refugees, just as neighbouring Bangladesh has opened up its doors for them on the humanitarian grounds. Noted Sufi activist of the Ajmer Dargah, Syed Salman Chishti invoked India’s traditions of “Atithi devo bhava (‘the guest is equivalent to God’) and Vasudhaiva kutumbakam (‘the world is one family’) in his appeal to absorb the Rohingyas.

Thus, Indian Islamic clergy of all hues and sects have spiritedly exhorted the Indian government, UNO and international human rights organizations to rescue and shelter the Rohingyas. But regrettably, none of them showed the courage of conviction to point to the radicalisation aspect of the issue. They have even failed to carry out their moral and religious task—refutation of the jihadist underpinnings of the false ‘protectors’ of the Rohingya rights.

After Kolkata’s extremist Islamist cleric has issued an ultimatum to the Indian government through the hate speech, the question is: will the ulema and Islamic clergy in India speak out, at least now?