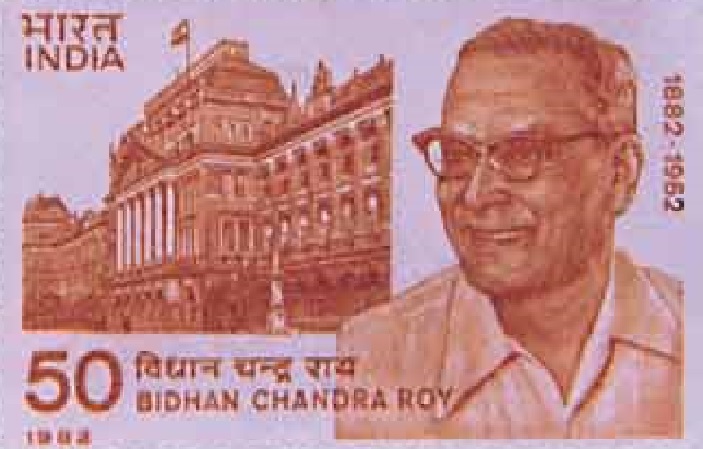 A good doctor always tries his level best to heal a sick body and make it healthy. It is to honor their them that we celebrate Doctor’s Day on 1 July. But it is also a day when the nation pays it respects to an administrator who tried and to an extent succeeded to heal a partition afflicted state. This good doctor can rightly be called one of the prime architects of modern West Bengal.

Now it is common knowledge that West Bengal was doing well till the pandemic plague of left-wing extremism started affecting it in the late 1960’s. Till then the good doctor kept it healthy with growing industries and decent education. It is keeping this nostalgia in mind that we honor the good Dr. Bidhan Chandra Roy.

Bidhan Roy was born on 1 July 1882 in the Bankipore region of Bihar to Prakash Chandra Roy and Aghorkamini Devi. When he was 14 years of age  his mother expired passing the reins of the family to Prakash Chandra Roy. But it was difficult for Prakash Roy to maintain familial responsibility due to his work as an excise inspector; as a result young Bidhan and his four older siblings had to share all the household work. It is from this experience that Bidhan Chandra realized the importance of domestic work and also the concept of helping those in need.

Having great understanding in the discipline of natural sciences, Roy passed his Entrance examination from Patna Collegiate School in 1897 and FA examination from Patna College in 1899. After graduating with Honours in Mathematics in 1901, Roy enrolled in Calcutta Medical College and obtained MSS degree in 1906 before applying at St Bartholomew’s Hospital for further education. The Dean, reluctant to accept a student from Asia, rejected the application. But Roy persisted and after 30 admission requests, the Dean accepted Bidhan to the college. And Roy showed his brilliance after finishing his MRCP and FRCS in 1911 making him one of the few people to complete both F.R.C.S. and M.R.C.P. concurrently.

Bidhan Roy had to struggle a lot when he was in Kolkata as his father was no longer in service making it financially difficult for him to fund his studies. But the academically competent Bidhan earned scholarships to bear the needed expenses. It was during this time that the Partition of Bengal was announced. Although young Roy was not ignorant of the phase the nation was going through, he believed he could better serve his nation by qualifying in his profession first hence paid more heed to his studies.

He entered Bengal politics in the early 1920s after being encouraged by Chittaranjan Das and ran from the Barrackpore Constituency as an Independent candidate for the Bengal Legislative Council in 1923. Dr. Roy’s debut became memorable as he defeated the “Grand Old Man of Bengal,” Surendranath Banerjee. As a member of the council he showed his concern for his constituency when in 1925, he tabled a resolution recommending a study of the causes of pollution in Hoogly and suggested measures to prevent them.

In 1928, Roy was elected to the All India Congress Committee and proved his mettle as a leader of the Civil Disobedience Movement in Bengal. In the year 1930, when the Civil Disobedience Movement gained massive momentum the Government deemed the Congress Working Committee as an unlawful body, and ordered the arrest of its leaders like Bidhan Chandra Roy.

Following his release Dr. Roy was elected Mayor of Kolkata in 1933. The Dr. Roy led administration brought improvements in the field of education, introduced free medical services, helped in establishing hospitals and charitable dispensaries, along with improving water and electricity supply. Dr. Roy also founded the Provincial Anti-Untouchability Forum in Bengal and presided over the All India Anti-Untouchability Day convention at the Calcutta Town Hall on 25 June 1932. Even in his younger days being a member of the Brahmo Samaj, Dr. Roy would participate in their social reform activities.

Dr. Roy was absent from politics between1935-1940 as he left the Congress due to disagreement with Sarat Bose. However, through the intervention of Mahatma Gandhi, he rejoined Congress as a member of the working committee but resigned during the Second World War changed due to difference in opinions. He came to Bengal and was re-elected as an Alderman in Calcutta Corporation.

During the WW2, the Government of India asked for the assistance of Roy to form the Army Medical Core and he took the job in 1942. The same year Roy was elected as the Vice Chancellor of the University of Calcutta. When the Japanese bombings in Rangoon took place, many students agitated in Calcutta, some in fear while some in joy as the Japanese forces were allied with Subhas Bose’s INA. Like in the case of Bengal Partition, Bidhan Chandra Roy believed that education should not be hampered by politics, as educated youth can serve their country better. Hence special air-raid shelters were made for students and teachers for classes to be held even at a time of war. Dr. Roy also helped in the relief effort for the Indian soldiers stationed in Malaya and Singapore. Initially like most in the Congress party Bidhan Roy opposed the partition of India but following the carnage of the Calcutta riots, he started to advocate partition in order to stop further killings of the Hindu community.

After independence the Congress Party wanted Dr. Roy to become the Chief Minister of Bengal. Dr. Roy however wanted to quit politics and devote himself to the medical profession. But after being requested by Gandhiji he took office on 23 January 1948. Bengal was at that time facing massive crisis due to large flow of refugees from East Pakistan. Yet the good doctor began to work on the immense task in front of him. For the settlement of the refugees he thought of the Andaman and Nicobar Islands which would solve the problem of rehabilitating them without straining the economy of Bengal. But his efforts were hampered by the intolerant leadership of the Left parties. But Dr. Roy calmly solved the problem without much discomfort.

Although a loyal Congressman the good doctor opposed the signing of the Liaquat-Nehru Pact which ensured the exodus of about one million Hindus from East Pakistan (now Bangladesh).Even Dr.Ambedkar the central Law Minister was critical of the pact who in his own resignation statement on 27 June 1950, damned the insensitivity shown by Pandit Nehru against the afflictions faced by the Hindu refugees.

On settling the refugee crisis, Dr. Roy put his focus on developing Bengal, starting with developing Durgapur as an industrial town. Umpteen numbers of industries grew with big names like Durgapur Steel Plant and Alloy Steel Plant coming up. As a lesson for modern politics Dr. Roy acquired lands for these projects by negotiating with the occupants and by not using the police.

It was CM Roy who started the work of developing the vast area of swamp we now know as Salt Lake, which now is an efficient urban complex with population of above two lakhs.  Dr. Roy would not blindly follow the central fiscal policies keeping some space open for small-scale enterprises in Bengal.When Satyajit Ray’s now legendary Pather Pachali was in need of financing the film crew decided to approach Dr. Bidhan Chandra Roy who on hearing Satyajit Ray’s narration of the story, decided that the film had to be financed under the “Community Development Project” of the Government of West Bengal. Despite bureaucratic reluctance, CM Roy ensured the funding.

The nation honoured Dr. Roy with the Bharat Ratna on 4 February 1961. Dr. Roy died on his 80th birthday on 1 July 1962, a rare occurrence. Today as we see the political disease that is afflicting West Bengal we miss the healing touch of Dr. Bidhan Chandra Roy.