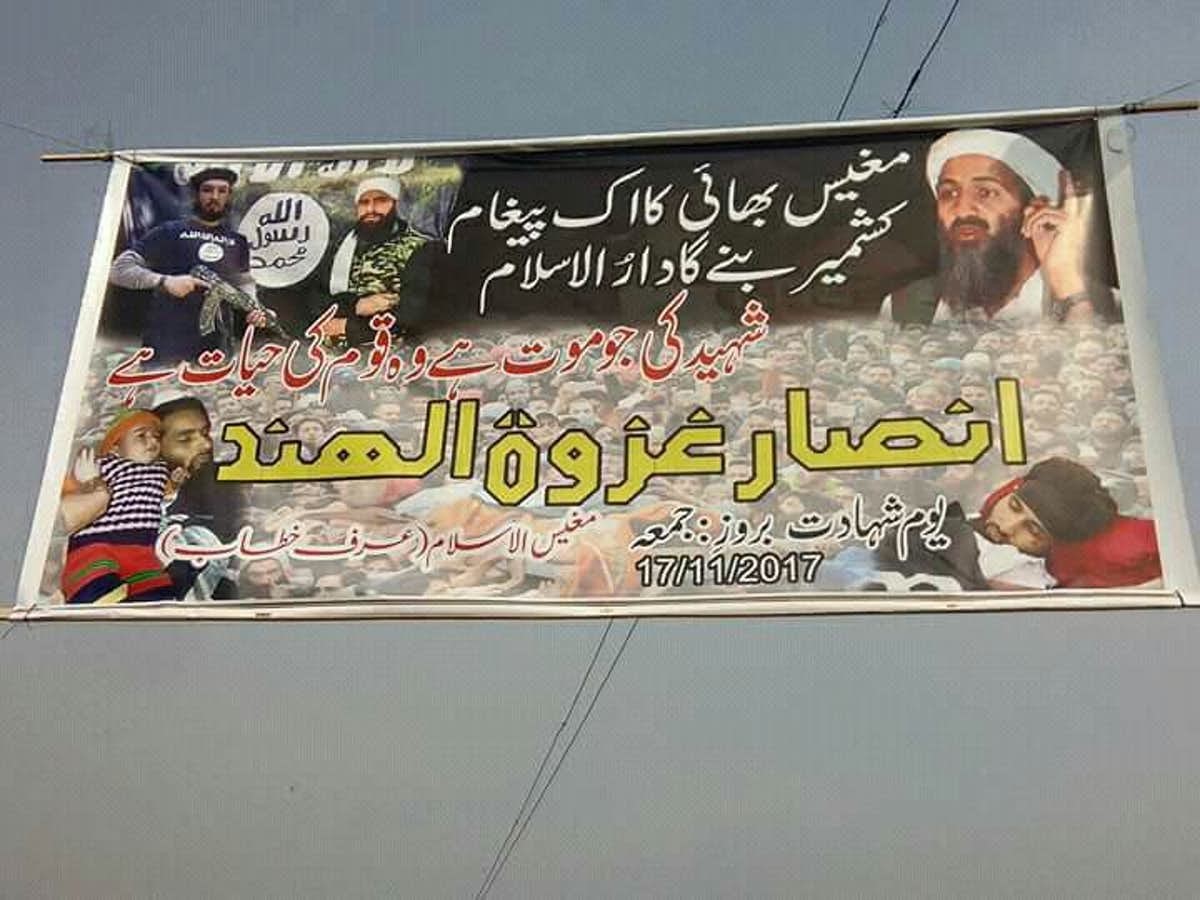 The medieval Islamic jurists divided the world into two sharply different categories: ‘Dar-ul-Harb’ (land of war) and ‘Darul Islam’ (abode of Islam). The two exclusivist Islamist terms are synonymous with the modern jihadist worldviews—Islamic state vs. un-Islamic countries which include the democratic, republican, communist and all nation states. They also coined the terminologies like “Dar al-Kufr” (land of infidelity), “Dar al-Ahad (land of treaty)” and “Dar al-Dawah” (land of preaching and proselytising) to further the expansionist political motives. But these terminologies continue to play an instrumental role in the jihadist movements today. The entire extremist jihadist rhetoric in India is based on the very dichotomous Islamist view. Therefore, all such obscurantist and dichotomous concepts which narrow down the Muslim worldviews are detrimental to the democratic world.

In a crazy bid to evoke the Muslim agitation on the Babri Masjid 25th anniversary, Ansar Ghazwa-tul-Hind, an affiliate of global terror network al-Qaeda in Kashmir, has urged Indian Muslims to “join the fields of the jihad”. In its latest video message which went viral on social media, Ansar Ghazwat-ul-Hind claims that the Babri Masjid demolition was an “unforgettable crime of Hindu extremists” and that “perfidious Hindus” will keep changing their tactics until their mission is accomplished — and that mission is “the elimination of every last Muslim”. The audio clip calls on every Indian Muslim to leave his house for jihad because “the enemy is preparing for war”. “Mujahideen is aware of all attacks on Muslims in India and we think of ways to protect them from it”, it says.

The audio clip further says that jihad will protect the community’s identity and character and that the “enemy wants to ensure that there is an Akhlaq, Junaid in a Muslim household for it to attack which is why it is important for us to unite”.

Castigating the democratic systems of governance and politics, Ansar Ghazwa-tul-Hind urges the Indian Muslims to “be wary of the Congress and BJP, the Samajwadi Party and Dravida Munnetra Kazhagam, the Trinamul Congress or Bahujan Samaj Party, for all are only faces of tyranny”.

In this latest audio message read out by Sultan Zabul al-Hindi (a pseudonym), whose grammar and accent suggests he is a non-native Hindi speaker, the al-Qaida outfit asserts that “the only solution for you is the rule of Shariah, which Allah has commanded”. This wary-cry of Ansar Ghazwa-tul-Hind is addressed not only to Indian Muslims but also to its Pakistani audiences, pointing to military ruler General Pervez Musharraf’s assault on the Islamist-controlled Lal Masjid in Islamabad. “The Babri Masjid and the Lal Masjid were one, and those who extinguished them were also one, both idol-worshippers”, it says.

Hypothetically, the use of the term ‘Zabul’ in ‘Sultan Zabul al-Hindi’ implies that he is serving, or has served, in southern Afghanistan. Scores of structures have already been pulled down in Afghanistan and Pakistan. Mosques, mausoleums and other Islamic structures are being flattened by hordes of religious zealots in these ‘Islamic’ countries day in and day out. But one wonders why the self-styled Muslims’ defenders like Ansar Ghazwa-tul-Hind or other al-Qaida outfits wilfully ignore this wanton travesty of religion and history in the Pak-Afghan region. Why the bully pulpit of the Pakistani and Afghani jihad is silent on the routine attackers on mosques and shrines in Pakistan and Afghanistan? Because these happen not to be ‘Hindu extremists’ but their own zealots, and they are performing their dance of destruction in the name of their own religion. Thus, the wilful misinterpretation and making a mockery of religion and history lies at the heart of the radical Islamists’ rhetoric. Only a fool could be indoctrinated into this.

Now, on top of the wilful misinterpretations of religion and history by the Ansar Ghazwatul Hind ideologues are the medieval Islamic doctrines like ‘Dar-ul-Harb’ and ‘Dar-ul-Islam’. One of its Urdu banners which appeared for the first time in valley near the residence of militant Mugees Ahmad Mir of Parimpora, carried this:

“Mughees bhai ka ek paigham….Kashmir banega Darul Islam” (Mughees gives only one message; that Kashmir will become the ‘land of Islam’). This slogan was written boldly on the AGH banner at the slain militant’s house. Remarkably, it carried al-Qaeda insignia and images of Osama bin Laden and separately Mughees with a gun in his hand and his month-old son on his lap, as Srinagar-based Kashmiri journalist Ahmed Ali Fayyaz reported in The Quint.

This has been echoed in the latest video message of the transnational jihadist group in Kashmir, Ansar Ghazwa ’tul-Hind. It says that it is devoted not just to the valley, but to a wider struggle to turn India into the land of Islam (Darul Islam). Given the recent pro-Zakir Musa protests reported in Kashmir, such theological underpinnings are worrisome and they might catch the imagination of the gullible religiously-driven Muslim youths in J&K.

Since the majority of the Kashmiri Muslims subscribe to the E’tiqadi, Barelwi (Ahl-e-Sunnat wa Jama’at) or Deobandi schools of thought, it is incumbent upon the Kashmiri youth to decipher the nuances and implications of the two Islamic terminologies-‘Dar-ul-Harb’ and ‘Darul Islam’—as implied in the writings of their own ideologues. Though they were coined in the medieval era of Islam, as an urgent task, a well-informed and patently clear Indian Muslim perspective on this issue should emerge from the established Barelwi and Deobandi ulema.

The origin of the term ‘Dar-ul-Harb’ in the Islamic theology is related to the medieval period when non-Muslim states on the border of Muslim states interfered with the religious freedom of the Muslims residing there or visiting them, which provided an excuse for intervention by the neighbouring Muslim states to defend their rights or to support rebellion by the Muslim community.

But Indian Constitution fully permits all religious communities including the Muslims to profess and practice their faiths. There might be local fringes or exceptional incidents that caused the breach of this constitutional right in volatile times, but the country is committed to the religious freedom in the essential sense of the term. Therefore, it cannot be termed as ‘Dar-ul-Harb’ by any stretch of theological imagination, even in the medieval sense of the Islamic term. No home-grown extremist groups or foreign jihadists, who claim to be ‘Muslim defenders’ or ‘Islam custodians’, should be allowed to exploit the polarised situations to intervene in the national affairs of the country.

Since Article 25 to 28 of the Indian constitution guarantees the right to not only profess a religion but also practise and propagate it, Muslims in India strongly believe in the constitutional freedom of religion. Moreover, the authoritative Indian ulema have not endorsed the war-related concepts of hijrah and jihad which pertain to the ‘Darul Harab’. They rather termed the undivided India as ‘Darul Islam’ (land of peace) because it provided a peaceful environment for the Muslim citizens to freely exercise their religious rights. This fatwa was issued by the leading Islamic jurist and founder-ideologue of the mainstream Barelwi (Ahle Sunnat) Muslims in India, Maulana Ahmad Raza Khan popularly known as Aala Hazrat. He buttressed his point that ‘Hindustan is not the land of war (Darul Harb) but rather an abode of peace, in his book titled in Arabic, e’laam-ul-a’alam bi Anna Hindustan daar-ul-Islam (declaration of the Ulema that India is an ‘abode of peace’). In his book on the subject of Islamic caliphate (khilafat), Dawam-ul-Aaish fi Aai’matil Quraish”, Maulana laid out rigorous conditions for an Islamic caliph to be appointed. Zakir Moosa does not stand up to even his criterion of the eligibility for being a caliph in even an Islamic country, let alone in a democracy.

In 1950s, the Darul Uloom Deoband issued a more attention-grabbing fatwa which categorically stated that India is ‘Darul Sulah’ or ‘Darul Mu’ahdah’ meaning: land of reconciliation and peace treaty. Maulana Hussain Ahmad Madani, founder of Jamiat Ulama-e-Hind wrote a book in Urdu, Islam Aur Muttahida Qaumiyat (Islam and Composite culture). He quoted profusely from Quran and Hadith to oppose the two-nation theory. Substantiating the point that Muslims and Hindus were one nation, he argued that the faith was universal and could not be contained within national boundaries but that nationality was a matter of geography, and Muslims were obliged to be loyal to the nation of their birth along with their non-Muslim brethren (biradran-e-watan).

No wonder then, the Taliban preachers who justify killings of moderate Muslims in Pakistan castigate the above fatwa of Maulana Hussain Ahmad Madani. As an Indian cleric, he was motivated more by the territorial nationalism rather than establishing a nation based on religious considerations. However, a section of the Deobandi and Barelwi ulema who looked for a means to butress the Islamic supremacism, supported the Muslim League’s idea of two-nation theory. They also resorted to the 1806 Darul Harab ruling which the extremist fringes today often quote to justify their wanton acts of violence. But in reality, the 1806 fatwa doesn’t apply to today’s India, as it was about the British India. In 1937, Maulana Madani addressing a political meeting in Delhi made a very pertinent point: “Indians were hated abroad because they were the slaves of the British. Today a nation is made on the basis of the country. If there are different religions in the country, the nation does not become different”.