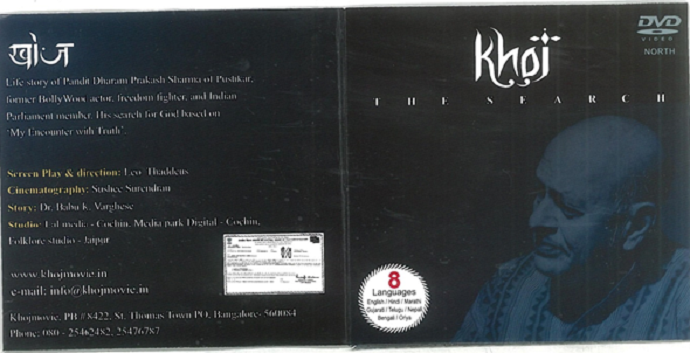 On 6 December, my son came back home around 8 pm after playing with friends. He had chips, juice, chocolate and two DVD’s in his hand. (Picture-1) I was surprised. My son told me that our Hindu neighbour, a Vishnu worshipper (let’s call him Mr. H)’s son had called the kids playing in the compound of our housing society to celebrate Santa’s coming. There he was given the stuff shown in picture-1 as Santa’s gift.

I was curious. I decided to go through the DVDs myself. Of the two DVDs, one was about the conversion of a Hindu to Christianity. And the other DVD was about the life and message Jesus Christ. Accompanied by Indian Classical Music, the movie has used Indian (Hindu) symbols, music, stories, and anecdotes wherever required. The following caption appears at the beginning of the story.

The first DVD had a movie based on the book “My Encounter with Truth” written by a certain Pandit Dharam Prakash Sharma with Dr. Babu K Varghese. The DVD begins by mentioning that it is a true story.

This is an attempt to impress upon the viewers the following ideas: The second DVD is a 2-hour long movie on Christ. It is in various languages with subtitles in different languages are provided. The movie depicts all major accounts of Christ’s life.

Briefly recounting his early life and profession, the movie also depicts Jesus’s baptism, his disciples and followers, main teachings, miracles and how he was betrayed, arrested and finally crucified. The movie ends with his Resurrection and final message.

The movie is quite a professional effort and has obtained proper censor board certification. Other details of the movie and DVD are as follows:

I was quite alarmed. I asked my son to narrate the whole incident.

He said H’s son who is 9 years old and is in class V, called all his friends to collect Santa’s gift. Around 10 kids, roughly in the age group of 8-12, (my son is 11, and is in class VII) landed up at H’s place. Children were first asked whether they knew about Christmas. Then in a subtle manner, they were told about the “saviour”. There they were made to sing carols and then they were given the Santa’s gift.

The following facts emerge from this incident which should send alarm bells ringing:

The next day when I confronted my neighbour, he expressed helplessness and said he was caught unawares. He said he has a relative married to a Christian. They came to his house along with a group of 5-6 Christian friends, and said they wanted to celebrate Santa’s coming. And the rest is history.

We read about the deadly ISIS, which is certainly a grave danger for humanity but at least it is right there in front of us. However, what just happened in my housing society is what we have to guard against—it is subtle treachery.

With Christianity all but wiped out in the West, conversions have reached their peak in India. No avenue is spared by missionaries to convert Hindus, which makes it urgent for Hindus to always be alert and on guard.

This was sent by Dharma Prahari from Mumbai who tweets at https://twitter.com/Sab_mile_Hue.