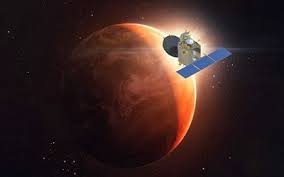 After a 10-month-long journey and covering 680 million kilometers, India’s first interplanetary spacecraft created history by entering the Martian orbit.  Much has been made of the cost-effective nature of Mangalyan, and sadly this is the only point being highlighted across the world. The fact that India is the only nation so far to reach Mars in its first attempt has become secondary.

With this kind of reporting two objectives are achieved. First, around the world, low cost is still associated with low quality especially if it has to do with space. Therefore, by raising the point of low cost, one is essentially raising the issue of quality. Second, it helps to camouflage the Indian understanding of the Solar System.

ISRO sent Mangalyan around the Earth and raised the spacecraft’s orbit using a propulsion system rather than relying on a heavy launch vehicle, which lowered the overall cost of the mission. This mission is all about technical capabilities, along with precision and swift planning that ISRO has demonstrated time and again.

Similar issues to divert the attention from the real facts have been raised before—how can poor countries afford space programmes?. This reflects the ignorance about the Indian space programme’s greater purpose and success against immense odds. Communication satellites have linked Doctors, Consulting Rooms and Operating Theatres across the country and have provided bandwidth for Education, Research and Agriculture. The open class rooms linked via Satellite TVs are a well-known success story. Remote sensing has doubled the identification of ground water tables (wells), enabled monitoring of Farm and natural resources and increased yields for Fishermen. Usage of space-related Technology spinoffs like light weight artificial limbs is only one of the many examples that have benefited the common man indirectly.

Indians always had a better understanding of Solar System. This understanding was duly acknowledged by the likes of Emmelin Plunret, who said “ there were very advanced Hindu astronomers in 6000 BC. Vedas contain an account of the dimension of Earth, Sun, Moon, Planets and Galaxies.” (‘Calendars and Constellations’).

Similarly, Carl Sagan who covered the subject in his television serial COSMOS, said: “the wonderful aspect of Hindu cosmology which first of all gives a time-scale for the Earth and the universe — a time-scale which is consonant with that of modern scientific cosmology. We know that the Earth is about 4.6 billion years old, and the cosmos, or at least its present incarnation, is something like 10 or 20 billion years old. The Hindu tradition has a day and night of Brahma in this range, somewhere in the region of 8.4 billion years. As far as I know, it is the only ancient religious tradition on the Earth which talks about the right time-scale.”

Coming back to the point, cost is a factor of perception. Perception is based on knowledge. An English-speaking kid will grow up thinking that going to the moon or some star will be an impossible task because he or she grows up on the lullaby

Twinkle, twinkle, little star,
How I wonder what you are.
Up above the world so high,
Like a diamond in the sky.

Though I know not what you are,
Twinkle, twinkle, little star…..

For the kid, a star is an unknown entity, which is far away.

However, for an Indian kid, it is exactly the opposite. The Indian kid grows up on the lullaby which says that one can go to the moon and stars at will and come back safely.

What is most interesting is that here, the moon becomes uncle of the kid. He is not an alien like “Though I know not what you are” but an uncle with whom he can eat, play and enjoy.

It is not a mere coincidence that most western movies always show that aliens come and attack humans. And after that, America-led western powers save the earth from total destruction.

It is natural that the cost of going to an unknown and dangerous place will be much more than going to a place which is known and friendly, other things remaining constant.

And yes, women in brightly coloured silk saris, with a bit of gold on the borders, pottus on their forehead, and gajras in their hair may or may not be visible or have been visible in past, when India reached new milestone in space, but always remember that it was them who sang those lullabies to their babies and told them that going to moon and stars is a cakewalk.

The logical question that comes to mind is that if this was the case, then why were Indians not the first to fly planes? Shivkar Bāpuji Talpade and Subbarāya Shāstry constructed and flew India’s first unmanned airplane in 1895 to a height of 1500 feet and this happened eight years before the Wright brothers’ Wright Flyer. The presence of Mahadev Govind Ranade and Sayajirao Gaekwad III during the flight is also cited in “Annals of the Bhandarkar Oriental Research Institute”. Hindustan Aeronautics Limited has preserved documents relating to the experiment.

Indeed, it will fitting in the order of things if ISRO can get Shivkar Bāpuji Talpade and Subbarāya Shāstry their due recognition on this momentous occasion of a successful Mangalyan, and place their names in their hall of fame.