The MFN Trade Clause is a Conundrum Confounded 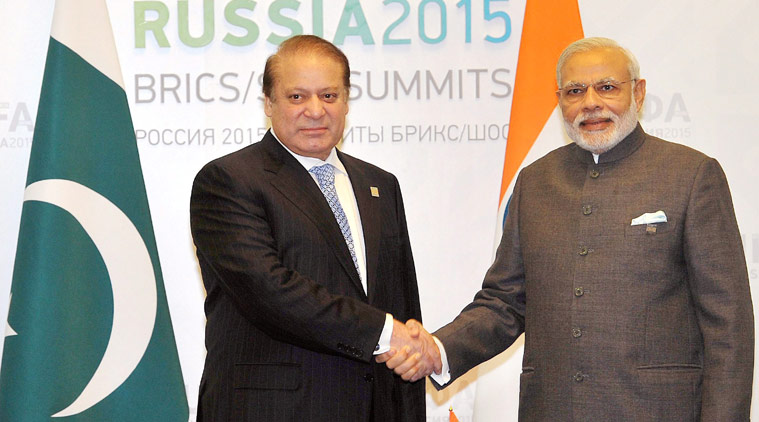 If Prime Minister Narendra Modi heeds to India Inc’s view, he will drop the thought of any kind of retort to Pakistan for refusing to reciprocate India’s gesture of giving that terrorist country, the MFN (Most Favoured Nation) trade benefit in…1996!

Proof of that pessimism came in the press statement of Associated Chambers of Commerce and Industry of India (Assocham), reported by the news agency IANS and carried in Business Standard on September 27, 2016. Citing official data, the report showed that out of India’s total merchandise trade of $643 billion in 2015-16, Pakistan accounted for a meagre $2.67 billion, and that, in all, trade with Pakistan was equivalent to the abysmal low of 0.41 per cent of India’s global merchandise commerce. Assocham’s Secretary General, D S Rawat said in the statement that “the MFN status, or no MFN, has not made much of a difference on the bilateral trade.”

While Assocham is thus indifferent towards withdrawing the MFN status to Pakistan, some Indian experts on international trade take positive, active stand. This is clear in a PTI report of the same above date. It quotes Rakesh Mohan Joshi, international trade expert with Indian Institute of Foreign Trade (IIFT) as saying “Pakistan’s industry will squeeze, if India decides to withdraw the status. Diplomatically it will be a good step to isolate Pakistan.” Further, the PTI report quoted the exporters’ body, Federation of Indian Export Organisations (FIEO) as saying that India mainly exports inputs to Pakistani industry, such as basic chemicals and cotton, which is vital for their industry. “Their industry will face issues, if India stops these exports. Their cost of manufacturing will go up,” FIEO director general Ajay Sahai said. Clearly, IIFT wants India to go ahead and revoke the MFN status given to Pakistan years ago.

However, an indecisive viewpoint has emerged from our Commerce Ministry. That it is hedging about “withdrawing” MFN to Pakistan or “leaving it untouched” can be seen from the headline in the “pink” newspaper: “Commerce ministry wary of revoking Pak’s MFN status”. Our ever cautious bureaucrats obviously saw the dangers/problems in treading that path. “While economic offensive can take many forms, revoking Pakistan’s MFN status may harm India’s position in multilateral trade forums, commerce ministry officials told the newspaper on the condition of anonymity,” said the newspaper. The argument was “Globally, countries tend not to revoke the MFN in cases apart from economic hostility by a trade partner. Since India cannot complain of harmful trade practices by Pakistan in recent times, revoking the status may make it difficult to explain India’s position to the global community, the official quoted above said.”

A typically brave north India stand has come from Punjab Haryana Delhi (PHD) Chamber of Commerce and Industry. With sizeable representatives from Punjab, PHD CCI has said it is willing to sacrifice trade with Pakistan for the country. “We are willing to forego trade with Pakistan because this is the time for cold diplomatic action,” said Mahesh Gupta, its president. Notably, the Chamber includes many exporters to Pakistan, who trade through the overland Punjab routes.

Revoking an MFN status given to a country may entail a possible technical hitch.

India will have to make use of the economic hostility by a trade partner exception clause of GATT or the ‘security exception’ clause of Article XXI (b)(iii) in the GATT.  However, India cannot complain of harmful trade practices by Pakistan in recent times, And national security is too sensitive a subject for the countries to be comfortable with while submitting to an international review. That is why a paper by Shailja Singh of the Centre for WTO Studies at the Indian Institute of Foreign Trade, said that “GATT and WTO practice shows that the countries have by and large observed self-restraint in using the national security exception…This is hardly surprising as there have been Article XXI disputes in the past between Czechoslovak (Socialist Republic) and the U.S. (1949); the U.S. and Nicaragua (1983 and 1985) and between the European Communities and former Yugoslavia (1992). That is why, countries across the world do not prefer to revoke the MFN status. In the present case, revoking the MFN status to Pakistan may make it difficult to explain India’s position to the global community.

India is also mulling the option of dragging Pakistan to the dispute settlement body of the World Trade Organisation (WTO) because of this. However, Pakistan has the choice to cite ‘security exceptions’ in Article XXI of GATT (General Agreement on Tariffs and Trade) under which a member-country may not grant MFN to another member on grounds of security as an excuse.

The overall conclusion seems clear to a layman. Denial of a reciprocal MFN Status by Pakistan for 20 years is looking like the Kaurav-like Chakravyuh– a web easier to get into, but difficult to get out from- for India.

So “What is this MFN?” asks the layman. How did it all begin? How did it develop into what it is today? There are really too many nuances couched in legalese, with a few bilateral treaties interspersed with exceptions in a global treaty. Let us briefly look into the history of MFN.

The term “Most Favoured Nation” (MFN) is surely one of the most illogical nomenclatures in the English language. Contrary to the three ingredients of that nomenclature, that phrase does not mean that a country, say “X, is preferred more than all others in the comity of nations. In fact, the joke, apocryphal or real, is that Pakistani political leaders believed that MFN status to India would be construed by its people to denote that India was being designated as Sabse ladla desh or Sabse pyara desh — a sentiment that would meet with hostility from the Pakistan public.

Such reciprocity was intended by the United Nations to bring about the substantial reduction of tariffs and other trade barriers and the elimination of preferences, on a reciprocal and mutually advantageous basis. This path breaking objective was negotiated during the United Nations Conference on Trade and Employment. This resulted in the General Agreement in Tariffs and Trade (GATT) document. GATT was signed by 23 nations in Geneva on October 30, 1947 and took effect on January 1, 1948. It lasted until the signature by 123 nations in Marrakesh on April 14, 1994 of the Uruguay Round Agreements, which established the World Trade Organisation.

What exists today is the GARR/WTO agreement between most countries, which are members of the United Nations, including India and Pakistan. Believe it or not, today’s concept of the “most favoured nation” status appeared first in the 18th century, with the US signing the Jay Treaty in 1794 sanctioning “‘the most favoured” trading status to Britain.

But, for the common man, the above elementary summary does not clarify, where GATT/WTO global agreement syncs with regional trade agreements? For instance, in 2004, India and Pakistan signed the South Asia Free Trade Area (SAFTA), along with six other South Asian nations. Apart from SAFTA having failed to live up to the expectations, with there being no substantial improvement in the trading environment and no increase in bilateral trade, the doubt remains as to how the global treaty allows the MFN clause to exist simultaneously with a free trade agreement? Perhaps there’s more of legalese, nuances and exceptions.

The above presentation raises a few questions.

First: Is it not a master comedy of sorts that while the World Trade Organisation requires members to grant one another “most favoured nation” status, one country refuses that benefit to another WTO member?

Second: Is there no provision in the GAT/WTO treaty that permits India to seek penalties, of one kind or another, on Pakistan accepting the MFN from us in 1996, but refusing to give the same to us till now?

Third: During the negotiations for the $6.64 billion bailout package from the International Monetary Fund (IMF) in September 2013, Pakistan’s Finance Minister, Ishaq Dar, had given an undertaking that it would take positive steps to grant MFN status to India. (TNN report of September 8, 2013)  Is there no legal provision for IMF to penalize Pakistan for violating an undertaking/assurance it gave to IMF about granting the MFN status to India? Why is India not doing anything on this blatant violation?

Fourth: Does the GATT/WTO global treaty prevent the levy of an export duty?  An intense search on Google guru gave no answer whatsoever. Hence, what prevents India from slapping such a duty on the export of cotton and filament yams to Pakistan in order to cripple their biggest industry, the textile industry? After all, we do so now and again on sugar, steel et al.

Fifth: Why should our cotton and filament yarn exports to Pakistan be levied an export duty? Here are the reasons.

(i) According to the Commerce Ministry data, the value of exports to Pakistan of cotton ($682.34 million) and man-made staple fibres ($103.85 million) totaling $886.19 million, constitute 68.59 percent of top export items of India to Pakistan.

(ii) Levying our above two most important export items to Pakistan with, say, a 30 per cent export duty, will considerably raise the input costs of Pakistan’s textile industry and could cripple that country’s economy.

Sixth: Why pick the textile industry of Pakistan for this “surgical strike”? Because it is the largest manufacturing industry in Pakistan. Pakistan is the 8th largest exporter of textile products in Asia. This sector contributes 8.5% to the GDP. In addition, the sector employs about 45% of the total labor force in the country (and 38% of the manufacturing workers). Pakistan is the 4th largest producer of cotton with the third largest spinning capacity in Asia after China and India and contributes 5% to the global spinning capacity. At present, there are 1,221 ginning units, 442 spinning units, 124 large spinning units and 425 small units. (See Wikipedia entry).

Seventh: Will the above export duty of, say, 30 percent, have disastrous consequences for us by discouraging our exporters, while increasing the cost of importers in Pakistan? Uncertain, and perhaps unlikely. If Pakistan fumes, it’s welcome to go to WTO and to International Court of Justice.

But, like the sentiment of the PHD CCI, cited earlier, showed, we should be willing to sacrifice trade with Pakistan for the country. And, besides, duty drawbacks can always be made available on exports of selected commodities. In fact, that move may well be the way to exit this Kaurav-like Chakravyuh cast around us by the conundrum of Pakistan’s denial of the MFN status to India. Why, for all you know, that bold step might well succeed — like our military’s “surgical strikes” of the other day.