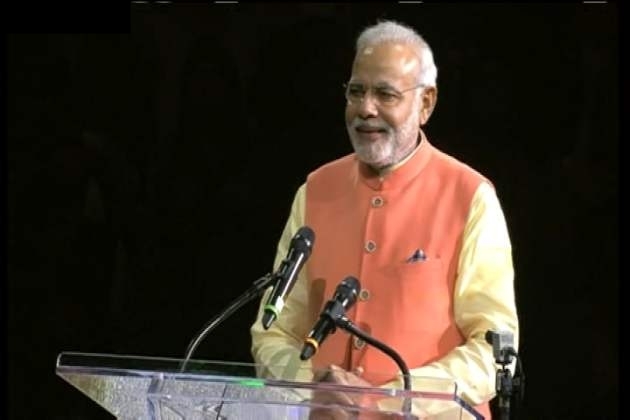 Amid the mix of the cynical, the patronizing, the downright racist and the ebullient reporting from Madison Square Garden it is easy to miss the forest for the trees. Beyond the song, dance, protests and journalist-added drama was a play of strategies and powers.

Let us start with the one most in-the-face at the event. The evident over-the-top love for India being demonstrated by the Indian Americans at the event. With cries of bharat mata ki jai and vande mataram, it would have been easy to imagine we were at a political rally in India rather than in the center of Manhattan.

Yet, even with all the over-the-top cheers, some of which gave the Delhi journalists dyspepsia, there was an element of simple hearted bhava or feeling. There were ordinary hardworking Indian-American doctors and engineers, teachers and hotel owners. There cries were not calculated but an outpouring of the celebration of finally have an Indian Prime Minister that they could relate to. Someone who did not get where he did from generations of privilege but from perseverance and good Gujarati hard work. But to the Indian media elite, this soulful sentiment is naturally crass, one they have exchanged for cynical power play a long time ago.

Not that the Madison event was devoid of power play. As Rajiv Malhotra had remarked to me last week, the 18,000 attendees in Manhattan were all extras in a script. The play was for the projection of Modi’s soft power in advance of his meetings with the American President and power brokers. The message was certainly not lost on the 30+ American members of Congress in attendance. It was a brilliant way for Modi to pack the deck before his meetings. Indian Americans, the richest ethnic group in the United States, are slowly starting to punch in their weight class, and becoming an important political constituency. The public demonstration of their love for India and support for Modi was a good reminder to the American politicians present there what side Indian Americans would expect them to take.

[pullquote]There cries were not calculated but an outpouring of the celebration of finally have an Indian Prime Minister that they could relate to.[/pullquote]

It was also a sight for any politician worth their salt to envy. The subtext was, if Modi could evoke this reaction in Manhattan, what kind of support did he enjoy in India? As a fresh-faced Columbia journalism major who I met in the Press area remarked to me “Wow! I can’t imagine such enthusiasm here for any politician, certainly not for Obama.”

As a power play it was pretty hardcore. Modi played his cards well. A large contingent of Bohra Muslims in their traditional dress served as an effective backdrop. Incidentally, it was the only community (other than Gujaratis) that Modi mentioned by name in his address, in a passing reference when speaking about his Jan Dhan Andolan. Overall, the event was intended to strengthen Modi, and India’s, hands in parleys with the American political establishment.

This is not to say that Modi’s engagement with the audience was not genuine. He is clearly appreciative of the diaspora’s contributions to India’s past and present, and the potential for the future. The Indian diaspora’s relationship with India is symbiotic. Despite the abundance of cynical naysayers, Pravasi Bharatiya ties with India are natural. The WSJ, in its fairly balanced coverage, reported Indian Americans as saying that the image of India affected how they were perceived and vice versa. An India that is developed, clean and successful is a positive asset for more than sentimental reasons for the diaspora.

[pullquote]Wow! I can’t imagine such enthusiasm here for any politician, certainly not for Obama[/pullquote]

No matter if they are second or third generation, they are often identified with India and “Indianness”. No wonder that so many actively participated in and celebrated Modi’s ascension to power. It goes without saying, or it should, for those with an ounce of discernment that India also benefits hugely from the diaspora. Not only are they a large source of foreign exchange, a driver of jobs to India, but also a powerful extension of India’s diplomacy in the US. In fact, key pieces of legislation in the US, such as tying strings to US funding to Pakistan, the nuclear deal and others would simply not have happened without strong Indian American lobbying and support.

Now let us look at the other side of the soft power play.  No organization in the Indian subcontinent concerns itself with trying to influence American opinion more than the ISI. Since the Pakistani Army is fed on US largesse, moulding US opinion favourably has been a long-term ISI project. Along with pumping funds covertly to US politicians, an offence for which Ghulam Nabi Fai was convicted as a front man, the ISI has bought out or influenced academics, journalists and activist groups. Indian leftists are particularly “useful idiots” for the ISI, given their antipathy to “Indian nationalism”. Not a surprise that these assorted intellectuals and journalists easily find themselves in ISI-funded conferences in the US on “human rights abuses” by India.

A small number of protestors appeared at the Modi event, though I encountered far more pro-Modi signs outside the venue. Yet the Washington Post devoted nearly half its coverage of the Madison Square Event to these insignificant protestors. Let us be 100 per cent clear. Just as the Madison Event was a projection of India’s soft power, the protestors are deployed with the sole aim to diminish it. They are part of the great game.  Pictures of a group of Sikh protestors holding signs saying “1984 Sikh Genocide” along with “arrest Modi” demonstrate that they are unencumbered by facts. ISI systematically funded Khalistani groups over a period of time while the Indian government lay asleep. This is founded on a deep-seated sense of humiliation the Pakistani Army carries for its defeat in 1971 and the split with Bangladesh, for which it holds India responsible.  Funding separatism and terrorism in India is one of the ISI’s prime objectives. These cultivated ISI assets are deployed when needed such as the group protesting against Modi for the “1984 Sikh genocide”.

[pullquote]Indian leftists are particularly “useful idiots” for the ISI, given their antipathy to “Indian nationalism”[/pullquote]

There was a report that Indian intelligence agencies are also now investigating direct funding of the ISI to some Indian journalists. While this may surprise some, it has been par for the course. Indian media is eminently bribable. Both Moscow and China have also been revealed to have done this in the past. Furthermore, the ISI even bribes its own media, and has “secret funds” for such information warfare activity.

The “Coalition Against Genocide” (CAG) group that was formed to lobby for the denial of US Visa for Modi also had several groups with ISI links. Most of these groups are actually shell groups where one or two people are behind a whole host of fancy-sounding organizational names. When the ISI links were revealed and CAG was getting to be a liability it was disbanded and reformed as the Orwellian sounding Americans for Justice and Accountability (AJA) which organized some of the protests.

Not that all protestors need to be ISI funded. There are plenty that are ideologically opposed to Modi and would work for the ISI cause for free. Crown Prince-in-waiting, Rahul Gandhi had even told the US Ambassador to India after the Mumbai attacks that Modi was a bigger threat than the LeT. Indians that raise the issue of Gujarat riots when the Indian Prime Minister comes to the US, must, prima facie, be viewed with suspicion. This includes street-fighter bully journalists. These Indians undermine the authority of the Indian state and the Supreme Court SIT that found Modi not guilty of the alleged offence of abetting the Gujarat riots and found, instead, that he made considerable efforts to stop them.

[pullquote]Rahul Gandhi had even told the US Ambassador to India after the Mumbai attacks that Modi was a bigger threat than the LeT.[/pullquote]

Protests are legitimate in any democracy and Indian protestors are welcome to exercise their democratic right to protest in India. When these protests are held in the US, it must be assumed that these are orchestrated to put India on the backfoot by people who have little interest in India per se. Unless proven otherwise, all those protesting the Indian Prime Minister in the US must considered anti-Indian since they are acting inimically to Indian interests and undermining the authority of the Indian state and of its diplomacy. This includes Indian media personalities. Asking questions on Gujarat riots in the US are as ridiculous as American journalists asking questions about Ferguson from Obama on an India visit. It undermines and disrespects Indian institutions and it would be worth filing a PIL to take cognizance of these offences. Similarly US journalists raking up this closed issue should be treated with the contempt they deserve.

Ultimately the Madison event was also a coming out party for Indian American power and a public recognition of it by the large contingent of American political figures. To continue its consolidation, we should be persistent and firm in the face of abuse, from “eminent” journalists or otherwise. It also needs to be clear that people genuinely interested in human rights in India work on the ground there for people.  Just like the ISI has no genuine interest in human rights and their dramas are for strategic maneuvering, their witting or unwitting collaborators in the US should be simply regarded as enemy agents. In the meanwhile we can celebrate the roar of our lion who is our neighbors envy and India’s pride.

(Sankrant is an author and entrepreneur based in Seattle and Gurgaon. He can be followed on Twitter @sankrant)