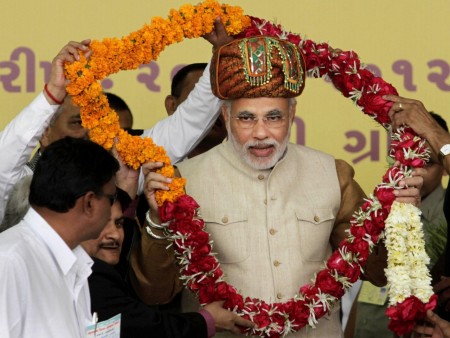 If the high voter turnout in the third and substantial phase of 2014 Lok Sabha elections is anything to go by, it reveals the effect of Sri Narendra Modi’s appeal to different sections of society in terms of mobilizing them to vote for change. Ironically, however, the pro-Modi wave has not gone down well with some sections of Delhi-based intelligentsia. Reflective of this, separate statements were issued last week by groups of left-leaning academicians and so-called eminent citizens warning the people of India that the possibility of Narendra Modi becoming prime minister constitutes ‘a palpable threat to the future of our secular democracy.’ As part of orchestrated campaign against the charismatic Modi, such doomsday narrative smacks of the pro-establishment, status quoist bias and hence, only few share their cynicism.

There is no denying the fact that the BJP’s Prime Ministerial candidate is the popular choice among the thoroughly disillusioned Indians cutting across communities and regions. Contrary to what these intellectuals claim, Modi, unlike the AAP architect, is not the product of the electronic media, nor is his popularity fuelled by the corporate houses. It is his efforts to reach out to all sections of society through his inclusive development mantra that has inspired hope and confidence particularly among the millions of young Indians in an atmosphere of gloom and desperation. Although he does not claim or project himself as ‘messiah’, many prefer to see him that way. Unfortunately, many of our intellectuals choose to gloss over the fact that the conditions for the rise of a messiah have been created by a remote-controlled, wobbly political formation called the UPA II, in the construction and sustenance of which many of these intellectuals played no small part. Either they provided ideological prop to this opportunistic alliance of the liberals, socialists and Islamists in the name of the fighting the ‘Hindustav’ forces or preferred to maintain an uncanny silence in the face of public uproar against the brazen loot of the state exchequer. It was because of their intriguing silence or lack of pro-active role in combating corruption and crony capitalism that the country’s youths took to the streets under the banner of ‘Youth against Corruption’, which was at a later stage though hijacked by a band of populist anarchists.

What is thus the cause of concern for many conscious citizens of the country is not the prophecy of doom, but the hidden agenda of these self-proclaimed defenders of ‘secular India’. In their attempt to portray Modi and the ideology he represents as a threat to national unity, they are trying to ensure the continuation of the corrupt dispensation in some form or the other so that they do not lose their political relevance and influence in the corridors of power. This precisely explains why they increasingly feel jittery with the surge in support of Narendra Modi and interpret the likely change of government in democratic India as ‘a shift in our civilization.’ Clearly, what the recent press statements warning the electorates about the ‘rising danger of bigotry, communal divide, organized violence’ if Mr. Modi becomes the country’s next Prime Minister seem to suggest is that personal and professional interests of these intellectuals are better served by preserving the status quo regardless of how strong and widespread the public mood for change may be.  Underlying such hypocritical expressions of concern for national unity, civilisational values and so on, the real intention of these pro-establishment intellectuals is to distract public attention from the core issues of corruption and inflation by diluting the model-centred political discourse.