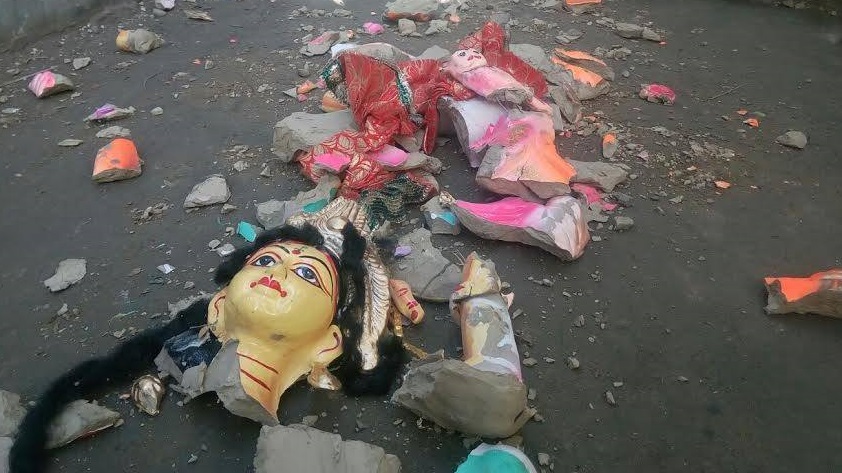 Bangladeshi Hindus faced the brunt of rampaging Islamist violence for over a week. The violence started on, 30 October, when an unruly mob of hundreds of Muslims armed with locally-made weapons demolished at least 10 temples to the ground along with vandalising hundreds of Hindu houses at Brahmanbaria‘s Nasirnagar upazila. It all began with a Facebook post  of an edited photograph that shows an idol of Bhagwan Shiva on the picture of Kaaba, a prominent Islamic religious site.

Protests broke out in Milak Tehsil of Rampur district against laxity of local police regarding assault on an OBC family of Bhurji caste in 3rd week of October by some Muslims of the village.

3. Mob murdered a Hindu youth in West Bengal as he denied to give Muharram donation.

Indrajit Dutta, a Hindu youth brutally murdered by a mob in Birbhum for denying Muharram donation.

BJP worker was found dead in mysterious circumstances in Mysuru while returning from a meeting opposing Tipu Jayanti.

5. Attacks on Hindus in B’desh by Awami League conspirators vehemently condemned by NYT.

Local Awami League politicians involved in a conspiracy to stir religious violence must face more than suspension from their party. The credibility of Ms. Hasina’s government is on the line.

Local Administration imposed curfew in Vidisha town following arson, stone pelting and sporadic communal clashes between Hindus and Muslims after a Bajrang Dal activist was stabbed to death by some Jihadi elements.

1. A fanatic section of ruling party is attacking minority Hindus in Bangladesh.

The unfortunate involvement of ruling Awami League is proved for attacks on minority Hindus in Bangladesh. Member and Ex-Members of Awami League were involved in Nasirnagar-Brahmanbaria attacks.

A prominent Sikh leader in the restive Afghan city of Kunduz was shot dead by unidentified gunmen, the latest in a string of attacks targeting the minority Hindu-Sikh community.

3. Dalit minority girls are victim of modern slavery through every persecution in Pakistan.

In Pakistan, 1,000 young Christian and Hindu girls belonging to the Dalit community, most of them underage and impoverished, are taken from their homes each year, converted to Islam and married, said a report by the South Asia Partnership organization.

A three member Jihadi gang unleashed brutality on Mithun son of Ayroor Thottathil Velayudhan, a Rashtreeya Swayamsevak Sangh karyakarta while he was returning from Sabarimala pilgrimage.

Goutam Sarkar, a minority Hindu College student was abducted on 13 December and thereafter murdered for ransom. His dead body was found on Saturday morning from a pond near Mahadebnagar village under Ghona Union of Satkhira Sadar Sub-District in Islamic Bangladesh.

A Hindu temple was vandalised and seven idols of goddess Kali were destroyed by some miscreants in two separate incidents in Bangladesh, weeks after over 10 temples of the minority community were attacked.

8. Twenty houses of Dalit Hindus set on fire in Bangladesh.

Twenty houses of Hindus were set on fire at Harijan Palli of Bonomalipara area in Bochaganj upazila of Dinajpur in Bangladesh.

At least 98 people from the Hindu community have been murdered and 357 others injured across the country till December 29 this year, says a report made by Bangladesh Jatiya Hindu Mohajote (BJHM).

10. Hindu-Muslim riot in Dhulagarh: A report

Jasmi Ismail, a Muslim girl hailing from Thekkumbhagom in Kollam district, Kerala has claimed that her life is in danger after she got married with a Hindu boy which led to the couple getting death threats.

In a setback for religious freedom, the Sindh governor, under pressure from Islamic hardliners, yesterday returned a bill that criminalises forced religious conversions, Pakistan media reported.

An angry Jihadi mob set fire to a police station in Deoria district of Poorvanchal region in Uttar Pradesh after the body of a missing Muslim youth was found floating in river Rapti.

In mid-January, West Bengal chief minister Mamata Banerjee tweeted her opposition to the date of the Union Budget, citing Saraswati Puja. But when the puja actually happened, several schools across Bengal, including a few situated just a stone’s throw away from her administration in Kolkata, were forced to cancel the festivities fearing reprisals from Islamist groups.

The Allahabad high court on 6 February, directed UP DGP and state authorities to maintain law and order and facilitate registered voters to freely cast their votes in Kairana .The court passed the order when an application was moved in an ongoing PIL seeking CBI probe into mass exodus of Hindus from Kairana.

Every year, Muslim men abduct and forcibly convert about 1,000 girls — mostly Hindus, but also Christians, according to the South Asia Partnership-Pakistan, a local human rights group. About 5,000 Pakistani Hindus leave every year for neighboring India — where 80% are Hindus — to escape religious persecution, according to the Pakistan Hindu Council.

4. BJP worker hacked to death by CPM activists in Kerala

A BJP worker was allegedly hacked to death by CPM activists during a festival at Kokkulangara temple near Thrissur.