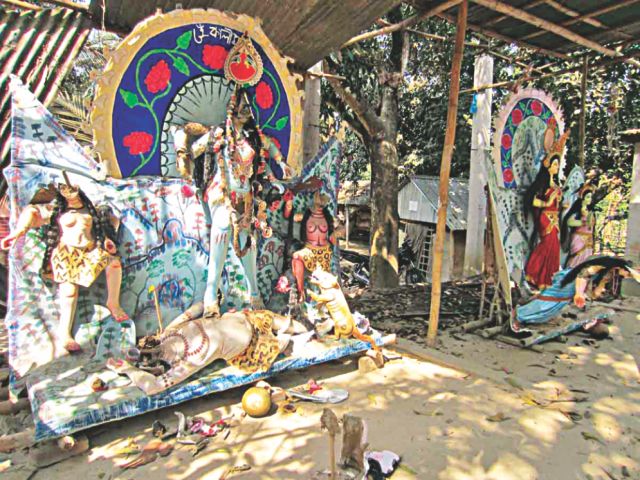 Locals attacked the ISKCON temple at Kajo lshah area of Sylhet district in Bangladesh for singing Kirtan and playing drums during the prayers session of the Muslims. This attack led to injury of seven, including a former woman councillor.

A 26-year-old BJP worker was hacked to death at Thillankeri in Kannur district Saturday night The deceased has been identified as Bineesh, who the police said was attacked with sharp-edged weapons by a gang near the panchayat office.

The Left Democratic Front (LDF) government in Kerala has decided to hand over temple recruitment, with the exception of those performing rituals, to the Public Service Commission (PSC), and dissolve the Devaswom Recruitment Board.

BEM UP school located in Puthiyara, Kozhikode was all set to mark the arrival of Onam with a celebratory feast. But delinquents wrecked a school in Kozhikode spoiled the food prepared for Onam celebrations for the children.

The Khandelwal Digambar Jain Mandir near Shivaji Stadium in New Delhi was robbed early on Friday. The crooks fled with antiques worth crores of Rupees.

6. Hindu girls kidnapped and forced to convert in Pakistan

A Hindu girl iwas allegedly sold for Rs 50,000 by a police official in Sindh province. Three days after being sold, the girl was forcibly converted to Islam and married to one, Zafar Masoori.

Shankar Ganesh , an executive committee member of Hindu Munnani’s Dindigul was admitted to hospital after an unidentified gang attacked him with lethal weapons on Monday night.

9. Punjab RSS leader Jagdish Gagneja loses battle for life, days after being shot at in Jalandhar

Senior RSS leader from Punjab, Brigadier (Retd) Jagdish Gagneja passed away on 22 September, after suffering from a kidney infection. Gagneja, was shot thrice in the abdomen from a close range by two young men on a motorcycle in a busy area in Jalandhar on 6 August.

A Hindu Munnani spokesperson C Sasikumar, of Subramaniyampalayam in Coimbatore district was hacked to death by a four-member gang on Thursday night.

11. For three years, a Hindu-dominated village in West Bengal is not allowed to organise Durga Puja.

Some 300 households in Kanglapahari village of West Bengal’s Birbhum district struggled to get permission from the district administration just to organise a Durga puja in their village. For the past three years, they didn’t get go-ahead for Durga Puja by the local administration following objections by a few Muslim families in the village.

According to police, a group of thieves stole four Panchaloha idols, worth lakhs of rupees from the ancient Sri Balaji Venkateswara temple at Injapur of Hayatnagar Mandal in Ranga Reddy district.

Twenty-year-old RSS worker Remith was stabbed allegedly by a group of Marxists in an apparent retaliatory attack in the village of Pinarayi in Kannur district. According to police Remith, who suffered serious injuries in the attack, succumbed to his injuries on way to the hospital.

Rudresh R, the mandal president of the RSS Shivajinagar Shakha and secretary of the BJP’s Shivajinagar assembly unit faced a lethal attack from two bike-borne men attacked one of whom pulled out a machete and struck him. This attack caused Rudresh his life.

A bustling village was turned into a riot hit desert, with hundreds becoming homeless, including children and many infants, who are now living in other’s homes and consuming community food.

A Bharatiya Janata Party (BJP) worker was brutally attacked by three unidentified persons in Idiyanchira near Thrissur district. The party has alleged Communist Party of India (Marxist) workers behind the attack.

6.  Mob clashes with cops over idol installation in Uttar Pradesh

A mob fought with police in Kushinagar district, after the police stopped them from installing an idol of Shiva in an old temple. Over a dozen people including four policemen were injured in the clash.

7. 10 temples destroyed in Brahmanbaria, Bangladesh with over 100 injured

Local Muslims armed with locally-made weapons demolished at least 10 temples to the ground along with vandalising hundreds of houses of the Hindu community at Brahmanbaria‘s Nasirnagar upazila reportedly in response to a Facebook post .