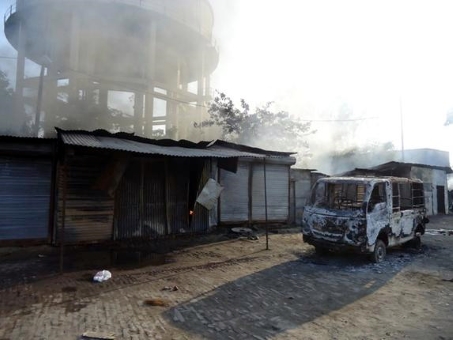 Neglect this advice, and you are inviting a backlash on yourself and after that you shouldn’t complain. The same advice is being given to the Sikh community of Saharanpur: no matter the Court verdict, if the Muslims of the area feel that a property is disputed, then it is disputed, and the rest of the society needs to learn to live with it.

Since the Muslims are calling the property “disputed”, the entire media, who by the way, are very reluctantly covering the riots, and in only a particular fashion, is calling it a disputed property. And by the way, the Sikhs are being asked: what were you thinking when you started building on a piece of land that previously was under the Waqf board, notwithstanding the court order which ruled in favour of the Sikhs?

This is a very predictable, a very routine reaction from Indian left-liberals, the peddlers of secularism, and the starry-eyed pluralists who invariably try to hammer into you that the only community that needs to assert itself is the Muslim community, and every other community is either harassing Muslims, or inadvertently stepping into a troubled territory.

Sikhs, being a minority themselves, haven’t incurred as harsh a reaction as in, say, had it been a temple rather than a gurdwara. They would have gone crazy about how there was actually a small mosque there and how the local Hindus first demolished the mosque and then started building the temple wall around the area, and so on. One of the local elders who is over 75, told on camera that there hasn’t been a mosque in the area for as long as he has lived.

The ongoing religious conflagration in Saharanpur between Sikhs and Muslims began when construction on a land given to a gurudwara began in the Kutubsher locality near Ambala Road. Someone spread rumours in the nearby Muslim locality that a mosque had been demolished and that a gurdwara was being constructed in its place.

According to local Sikhs, just in a matter of a few minutes, a strong crowd of around 500 Muslims started pelting stones at the gurdwara and when their thirst for throwing stones was quenched (and when the Sikhs started retaliating), the crowd moved towards Ambala Road, setting fire to Sikh-owned shops, service centers and stores. Now that they were at it, many business establishments belonging to the Hindu community were also set on fire but that’s a topic not worth discussing at the moment, and in fact if you mention that, you are a Sanghi looking to add fuel to fire.

On Ambala Road, a massive crowd of 25,000 Muslims set ablaze more than 100 shops and buildings including a fire station. Many unsuspecting buses, trucks and vans were also torched.

The Sikhs complained that while the administration kept convincing them that the law and order situation would soon be brought under control and therefore, the community shouldn’t retaliate, thousands of Muslims were pouring into the area from adjacent towns and cities. “As if it was a conspiracy to keep us distracted while the Muslims gathered strength,” one of the local Sikh shopkeepers complained. The policemen fled when they saw such a big crowd approaching the area, leaving the local Sikhs to their fate.

One aspect of the riots that is conspicuously missing in the news coverage is that, as it happened during the Gujarat riots, here too it was someone belonging to the Congress party who instigated the Muslims against the Sikh community in the first place.

This is not the only extreme reaction by the Muslims in this area and the nearby areas. Recently, there was a big hue and cry over the installation of a loudspeaker in a Moradabad temple because it disturbed Muslims practicing Ramadan. There was another controversy when the Muslims of an area complained that the bells of a Hindu temple were purposely rung loudly to cause annoyance to the Muslims of the area. If this is the case, if they get disturbed when other communities practice their own religions, then what about the Hindus practicing their religion and getting disturbed by the voice of azaan (call to prayer) on loudspeaker multiple times in a day? What about 100s of Muslims gathering on the roads every Friday and causing massive traffic jams even in Delhi, even on the Ring Road? Do people complain? They have simply gotten used to the phenomena because there is no other choice. In a pluralistic country, you have to accommodate everybody. People belonging to other communities are quite tolerant and understanding in that way. Why can’t the Muslim community show the same level of tolerance?

A big chunk of the fault lies with the way our mainstream media portrays conflicts that involve Muslims and other communities. Actually this tendency isn’t just manifested in India: look at what is happening in Gaza.

With Sikhs, the mainstream media and the left-lib class is still showing some semblance of propriety because after all, both the aggrieved communities are minorities. Had it been a Hindu-Muslim clash, there would have been an onslaught of the grievous, graphic details of how Muslims are being badgered by the rampaging Hindu mobs led by the BJP and the RSS. In any case, the media is still trying to give this spin to the entire development one way or the other, but so far they are unable to let their imagination run wild the way they would have liked it to run. This, coupled with the total political pusillanimity and opportunism, the situation has now been aggravated.

It’s high time they get the message that it is actually a pluralistic world we’re living in and that we all have to live together whether they like it or not. Just as they are not going anywhere, the rest of the communities too aren’t going anywhere. Muslims need to learn to deal with that.