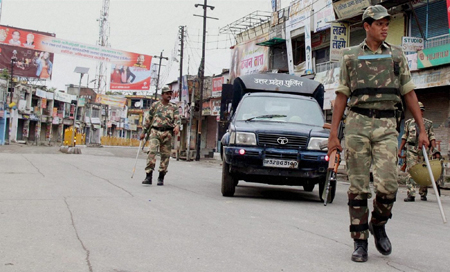 Information was sought from the District Administration by applicant Sri Gyan Kumar on the Jan Sabha that happened on 31 August prior to the Muzaffarnagar riots. BSP MP, Kadir Rana, Noorsalim Rana, and Saeed Dujjama along with other Muslim leaders were present in this Jan Sabha. At that time, Section 144 had been in force in all the districts of Western UP. Despite this, the administration gave permission to these leaders to host the Jan Sabha. Two senior officials of the administration, DM Kaushalraj Sharma and Praveen Kumar Singh were present in this Jan Sabha, and received a memorandum on the spot. However, the information that was provided under the RTI Act states that Surinder Singh and SP Manjul Saini were present at the Jan Sabha although these officials were immediately transferred out after the Kawal incident. If one looks at the media reports of that day, then it would be clear that Kaushalraj Sharma and Praveen Kumar attended the Jan Sabha. This information provided by the police highlights how seriously the administration has taken this incident.

This information received under the RTI Act is enclosed below.

In the service of,
Area Officer
Muzaffarnagar District

Sir, the information sought under the RTI Act 2005 is chronicled below:

2. No officer from the administration or the police was present at the Jan Sabha held at Halapar Shaheed Chowk dated 30 August 2013 although at the time of handing over the memorandum, DM Surendra Singh and SSP Smt. Manjul Saini were there.

4. The information regarding the controlling officials of police and paramilitary forces in various police
stations for dates 0707/09/2013 and 08/09/2013 is still awaited.

5. In the context of the riots, no written instruction was sent from the Haja police station to the headquarters.

The report by Abantika Ghosh published in the Indian Express on 19 September 2013 states that the incident of eve teasing was at the centre of the widespread violence in Muzaffarnagar in which the victimized girl said that over the last 7—8 days, Shahnawaz and his friends of Kawal village used to harass her everyday on her way to school. She had told her family about this harassment, “the next day, my uncle, my brother Sachin and Gaurav went to Kawal village to tell Shahnawaz and his friends not to indulge in such behaviour. Sachin and Gaurav then asked me to go home. I don’t know what happened after that.”

In another report published by the Indian Express on 13 October 2013 by Seema Chisti, it was claimed that no girl was ever eve teased in Muzaffarnagar. Now the question is does the Indian Express understand the sensitivity of the matter? Is this newspaper objective in its reportage?

A total of 532 FIRs were registered against about 12000 known and unknown people in the context of the Muzaffarnagar riots. Approximately 6500 of them had been named. Of these, 80% are Hindus. Most of those named in these FIRs have been wrongly named. This fact has been admitted by the UP Government itself in its writ application #196(13) filed in connection with the Jat Mahasabha Meerut, etc Vs Uttar Pradesh Government & Ors.

1. The reports are so concocted that there are three separate reports for each incident in which the time, place and names are all different.

2. In some reports, the serial number of those named is identical to those in the other reports.

3. Different reports have been typed on the same computer where the serial order of the valuables stolen is also the same. For example, in reports after reports there have been mentions of stolen property like “goat, fridge, double-bed, etc” appearing in the same order.

4. In many reports, the details of the complainant are missing.

5. As many as 20 fake cases have been registered against an 89-old Khap member, Chowdhury Baba Harikishen and his son, Rajendra.

6. In several cases where no one has died, people have been reported as dead.

7. The reports are so concocted that names of several women have also been registered as offenders in numerous gruesome incidents.
IG Police of Meerut Zone, Ashutosh Pandey in several press conferences not only admitted to the fake names being registered in several FIRs but also gave examples of the same. Before the administration posted IG Pandey, the kind of state-sponsored torture that went on forced many Hindus to leave their homes for months on end and live in the jungle nearby.