Was Narendra Modi the real target of MH 17 shooters? 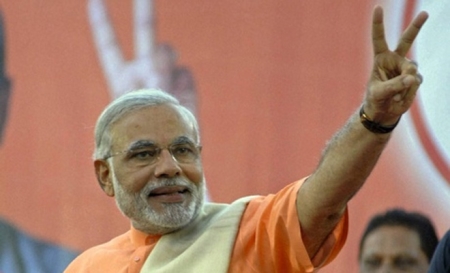 New information has emerged in the aftermath of the shooting down of the Malaysian Airlines flight MH 17 which was on its way from Amsterdam to Kuala Lumpur.

According to reports in the media, Prime Minister Narendra Modi was scheduled to take off at 1 PM from Frankfurt on his way back to India from Brazil where he had gone for a meeting of the leaders of the BRICS countries. His flight eventually took off at 1:22 PM. Had Modi’s flight taken off at 1 PM as the earlier reports had indicated, it would have been in the vicinity of the shooting within six minutes of the Malaysian Airlines flight being shot down.

Depending on the wind conditions and the air traffic controller’s instructions, it is also possible that Modi’s aircraft was routed first over the Donetsk area as MH 17 crossed the longitude of Frankfurt at a point roughly a little more than 130 miles to the north of Frankfurt.The flying time from Frankfurt to Donetsk can also be confirmed by looking at the flight logs of commercial flights from Frankfurt to Delhi on the website flightaware.com. A Lufthansa flight on this route one day prior to the tragedy took 2 hours and 25 minutes after takeoff to arrive within fifty miles of the latitude and longitude of the ill-fated flight.

It should also be noted that neither Russia nor Ukraine stand to gain anything from shooting down civilian aircraft. The negative propaganda surrounding any such shooting would hurt them. Furthermore, the Hindu reported that Ukrainian officials initially exonerated the rebels in the aftermath of the shooting when they stated that the rebels did not possess the kind of missiles that could reach the altitude at which MH 17 was flying.

The Ukrainian government has also contradicted itself in the flurry of information that it has been putting out along with its allies in the West. A couple of days before the shooting of the Malaysian Airlines jet, it accused Russia of bombing the village of Snizhne. Yet, it has now produced a photograph that is purportedly the image of the contrail from the missile that brought down MH 17. This missile was supposedly fired from Snizhne which they now claim is controlled by pro-Russian rebels. The accusation that Russia carried out a bombing raid on Snizhne is not logically consistent with the claim that pro-Russian rebels control this village.

Strangely, the only people who claim to be absolutely certain about the identity of the perpetrators of the crime are the officials in the Ukrainian government and their Western allies. They have produced ‘evidence’ in the form of recorded phone calls, a video of the missile being “smuggled” to Russia without being covered, a photograph of smoke from the missile (this is supposed to be like the ‘smoking gun’), and tweets allegedly made by the pro-Russian rebels. The rapidity with which they have produced these pieces of alleged evidence and the manner in which the Western media has faithfully propagated the claims of their governments without verifying the claims points in the direction of the flow of information being carefully managed. It is also not convincing that the pieces of ‘evidence’ they have produced are authentic.

The alleged recording of the phone call between the pro-Russian rebels one of whom was at the site of the crash even contains a dubious claim that a body from the plane was that of an Indonesian student of Thompson University. It is not clear how they identified either the nationality of the victim or the fact that this person was a student as soon as they reached the scene of the debris from the plane. What makes the claim dubious is that there is no university named Thompson University in any part of the world unless we take into account a website that sells degrees online. There is a Thompson Rivers University in Canada but they have clarified that none of their students was aboard the plane.

If Western countries are indeed indulging in a disinformation campaign, this would not be the first time they have done so. During the bombing of Yugoslavia in the 1990s, photographers positioned themselves inside a barbed wire enclosure and photographed refugees of the American bombing with the barbed wire fence in the foreground and claimed these were photographs of concentration camps similar to those in Nazi Germany. It was also the backdrop of the attack on Yugoslavia that Hillary Clinton used during her presidential election campaign when she made up a story about an assassination attempt on her. She claimed to have run from her plane with her head down as bullets from sniper fire were buzzing around. This ridiculous story was faithfully carried out in the American media and most of her voters supported her based on this claim. More recently, when an American ambassador was killed in Benghazi by terrorists who may have received help from the Obama administration, the State Department under Hillary Clinton covered up her failure with the help of the media and pinned the death on Muslims who were stereotyped as violent people who went wild after watching a YouTube video that insulted Islam.

If  was mistakenly brought down, it is important for those who are interested in the truth to investigate those who have opposed Modi for more than 12 years. Since late 2001, many international forces have carried out a sustained campaign against Modi and have used their favorite method of using human rights organizations to fling mud at him and have even accused him of human rights violations. None of their attacks worked over the years as their allegations did not stand the scrutiny of the Indian courts. Modi has even been banned from visiting the US because they fear that India under his guidance would become independent of the Western institutions like the World Bank. The propaganda against him in the British and American media reached a feverish pitch before the general elections earlier this year.

Modi’s election in May as the Indian Prime Minister caused a huge geopolitical earthquake, and any harm to him will have great ramifications around the world. India and Russia have a good relationship, and had Modi’s plane been brought down, it could have made Indians permanently resent Russia. Good and neutral investigators should not rule out any possibility and all data should be taken into consideration in an objective manner before arriving at any conclusion about the perpetrators of the crime which resulted in the tragic loss of the lives of hundreds of innocent people.